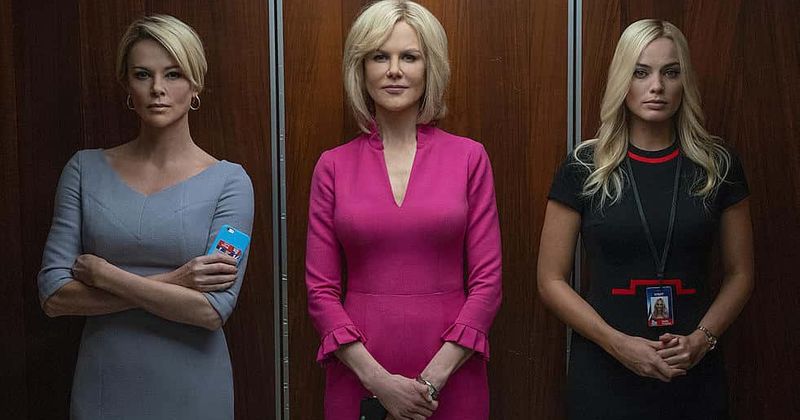 The new teaser trailer for the latest Roger Ailes/Fox News takedown, Bombshell, features Margot Robbie, Charlize Theron, and Nicole Kidman doing their best “get on an elevator and look apprehensive for no obvious reason” impression.

Interestingly, there is no mention in the casting of who’s playing Bill O’Reilly, Ailes’ number one, on-air anchor at the time of the alleged harassment problems at Fox, who ultimately also lost his job.

That’s funny. I wonder why.

Check it out here.

Well, Here’s A Bombshell We Can All Agree On…

Bombshell will follow a pattern as boring as it will be predictable: Megyn Kelly, Gretchen Carlson, and the anonymous, but plucky, producer will takedown the most famous philanderer in cable news and media in the last half of the 20th century, this striking a blow for #MeToo and all women ahead of the 2020 election.

The plot pattern is predictable, only in that Hollywood seems to never tire of barely hiding its genuine disgust for its audiences’ perceived political opinions and apparent voting patterns.

Usually, under a thin veneer of opinion journalism, marked and sold as pop entertainment.

You may be asking where are the scathing, blonde led, take down films or television series’ featuring Brian Williams, Matt Lauer, and Willard Scott, or even Bill Cosby, Woody Allen, or Roman Polanski, getting their comeuppance for their well documented public and shocking harassment, plagiarism, and even sexual improprieties and peccadillos?

The answer is, you ain’t gonna see those films, even if the principles involved in the bad/criminal behavior pass into the hereafter and even if the victims write tell-all books and sell a few million copies, or have successful lawsuits with victim payoffs numbering in the millions of dollars.

And if the repentance won’t come, well, the lecturing/hectoring via film, TV, streaming and now social media will continue until voting patterns are realigned appropriately.

Bombshell (original title Fair and Balanced) was shot against a $100 million dollar budget that exploded during the course of filming and caused Anapurina Films to back away from financing it last year.

For what reasons the budget exploded beyond salaries to principals, I’m not sure.

Maybe that makeup to keep Theron and Kidman looking that ice-cold (and young and line-less) cost a lot of money.

And then, Bombshell will bomb out; fading into the dustbin of film history, with nary a mention at the Oscars.

Less All the Presidents’ Men and more like Stepford Wives.