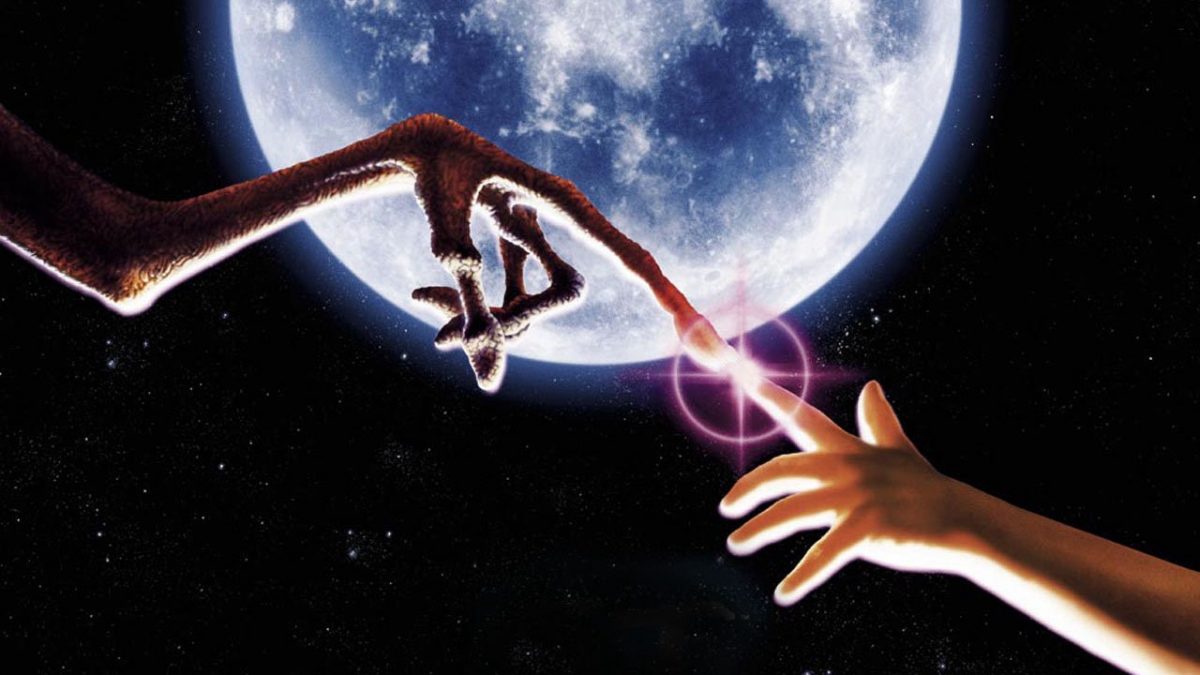 Is He A Pig? He Sure Eats Like One

Steven Spielberg commissioned writer/director John Sayles to create a script for a pseudo-sequel to Close Encounters Of The Third Kind called Night Skies, about a suburban family terrorised by a group of aliens, one of which, befriends the family’s son. The project was too dark in tone for Spielberg, so he and screenwriter Melissa Mathison combined it and another of Spielberg’s stories about a kind-hearted alien visiting a boy on earth, called E.T. The Extra Terrestrial, was born. To maintain secrecy while shooting, the production was named A Boy’s Life. The idea of the terrorised family was refashioned as another eventual Spielberg production, Poltergeist.

In order to maintain a spontaneous and streamlined shoot, Spielberg didn’t storyboard any of the shots for E.T. and kept the script Mathison had written on small notecards stuffed into his shirt pocket. This gave him the freedom to revise, improvise, and make things up with the child actors on set. Shooting began on September 8, 1981, and finished in December 1981. The scenes are mostly seen in the same order as they were shot.

For scenes that required the animatronic E.T. puppet—like Elliott’s room and the family’s living room—Spielberg had the sets raised on built on stilts. The robotic puppet was bolted down, and its wiring was hidden under the floor. Puppeteers were able to manage the puppet’s performance from a series of monitors located in another room.

Why Don’t You Go As A Goblin?

As Poltergeist and E.T. were both filmed at the same time, the casts and crews used to hang out together. Especially the children from both movies. Spielberg spent the entire day dressed up as an old woman for the Halloween scene. He even bobbed for apples and went trick-or-treating with the cast at the wrap of that day’s shoot.

Spielberg acted out the voice parts of E.T. by positioning himself just to the side of the camera, uttering famous phrases like “E.T. phone home,” also occasionally speaking in full sentences to better connect the character to the child actors. For the final print, sound designer Ben Burtt (Star Wars, The Empire Strikes Back, Raiders of the Lost Ark) hired a deep, raspy voiced non-actor named Pat Welsh, whose lowered voice pitch was mixed with sounds of various animals breathing. For her performance, Walsh allegedly received only $380. In all there were 18 different contributors to the voice of E.T.

Spielberg wanted those on-set to act as if E.T. were a real actor, and asked the special effects designers to test out all puppet movements well before production began to ensure that the illusion wasn’t easily broken. Going further even still, Spielberg told the young Drew Barrymore (Gertie) that the puppet was an actual living, breathing alien, and during the scene where E.T. dies, the sobbing reaction shots of Barrymore tears are real, she truly believed that E.T. had passed away.

Scenes where Spielberg opted to show full-body shots of E.T. moving around were performed by three different actors. Matthew DeMeritt, Tamara de Treaux and Pat Bilon, wore special E.T. suits for wide shots of the alien walking around. They were able to see out of well-hidden slits cut into the upper part of E.T.’s chest.

The BMX bicycles used in the movie were all made by Kuwahara. The half white/maroon model which was ridden by Elliot was the E.T. Kuwahara. The film ensured many kids at the time to get BMX’s.

Originally, Elliot was supposed to lure E.T. with M&Ms, but the M&Ms/Mars Co. wouldn’t let the filmmakers use their product, so the candy was changed to Reese’s Pieces. Foley artist, John Roesch, used a wet t-shirt stuffed with Jello for the sound of E.T.‘s walk.

The iconic shot of our heroes flying across the full moon was mostly a real shot. It took Visual Effects Supervisor Dennis Muren and his team weeks to find the right spot to film a low moon among the trees, so they used maps and charts to coordinate the scene until they found the right spot. In the shot, Elliott and E.T. are puppets that were added with special effects in post-production.

Considered one of the greatest films ever made and was widely acclaimed by critics. In 1994, E.T. The Extra Terrestrial was selected for preservation in the United States National Film Registry as being “culturally, historically, or aesthetically significant“.