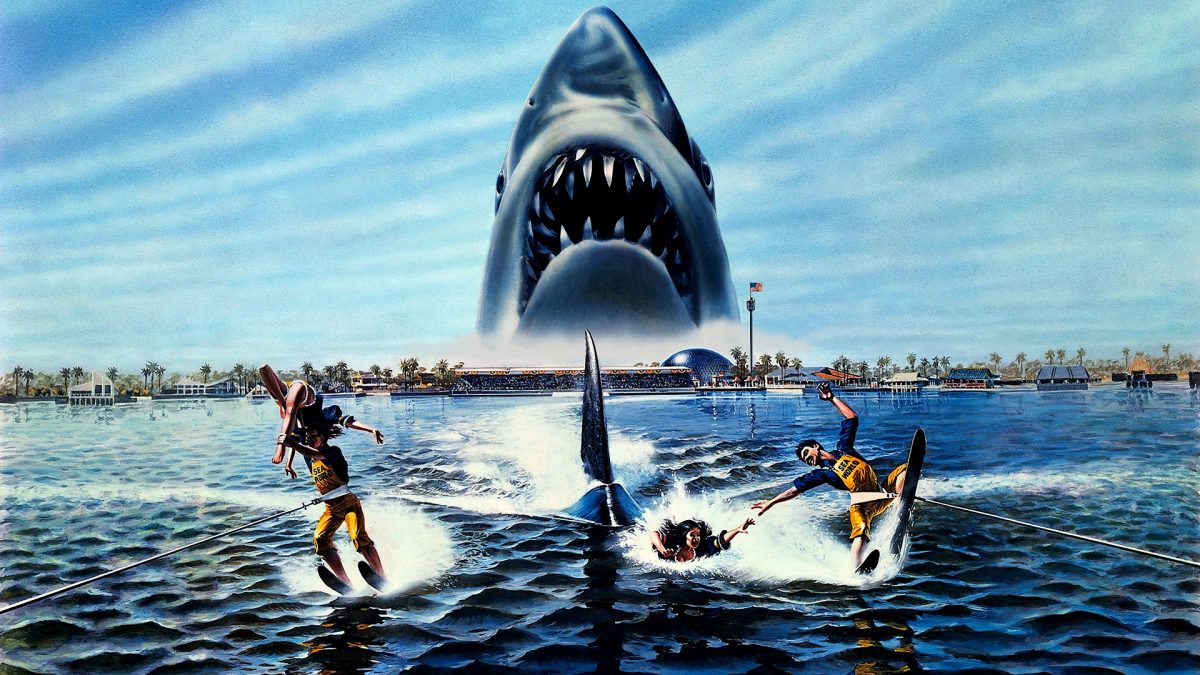 Welcome to Part II of our trawl through the murky world of the sequels to one of the greatest movies of all time – Jaws.  Part I can be found here.

1978’s Jaws 2 set the benchmark for following up a smash hit with a movie that created its own hype.  Before that movie, sequels were poorly regarded in Hollywood.
Roy Scheider was only dragged back for that movie because he had a contract and eventually did a deal, and did the movie under duress.  Lorraine Gary was always going to play.  She was married to Sid Sheinberg, head of Universal Studios.  He, in turn, worked with the Producers, Zanuck & Brown, to provide Spielberg with air cover back in Hollywood when all looked lost on the first Jaws movie.

When Jaws 2 hit and hit big, it was clearly only a matter of time before Brown & Zanuck attempted a third movie.
Zanuck & Brown’s background in slapstick comedy with Airplane and Police Squad in their DNA nearly caused this movie to be a spoof!  To be titled Jaws 3 – People 0, they grabbed National Lampoons Animal House producer Matty Simmons.
Simmons outlined a story that involved shark-like aliens invading and commissioned National Lampoon writers John Hughes and Todd Carroll to turn it into a script, that Joe Dante was to direct.  The first scene was to involve Spielberg being devoured in his own pool by one of these aliens.
Arguments commenced with Universal who wanted to avoid shitting their own bed so spectacularly by making a spoof entry.  Eventually, Alan Landsburg stepped in and bought the rights to the movie, determined to move into more serious waters.

He immediately called in some big guns.  Legendary writer Richard Matheson, of I Am Legend fame, wrote an outline returning to the New Jersey shark attacks that inspired Brenchley to write the original novel.
In his story, a Great White swam up a saltwater river and terrorised an inland fishing community around the lake it was trapped in.
As Landsburg (not Sheinberg), was in the driving seat there was no automatic role for Lorraine Gary this time.
Roy Scheider had only returned to do Jaws 2 under threat of contract.  To make sure he wasn’t even asked he found out when it was to be shooting, then accepted Blue Thunder instead.
The studio insisted that Brody’s two sons were included in the story.  They also insisted on a specially created role for actor Mickey Rooney.  At this point, Matheson had enough and quit.
Guerdon Trueblood was then brought onboard as a writer.  There is some controversy here around the origin of the story as Matheson has expressed anger over “some other writer” being credited with his story.
Others have claimed the trapped shark idea was Trueblood’s.
Either way, this was the 80s after all, so a team of Hollywood script doctors worked alongside Jaws legend Carl Gottlieb and the dusty old lakeside town upstream was turned into the 80s, plastic fantastic, consumer spectacle of an unnamed and generic marine theme park connected to the sea via a man-made canal.
On a personal note, I have searched high and low online and I cannot find a copy of Matheson’s outline anywhere, or indeed any version of a treatment or script that doesn’t include a theme park.
Finding one has become something of an obsession for me but so far I am unsuccessful. 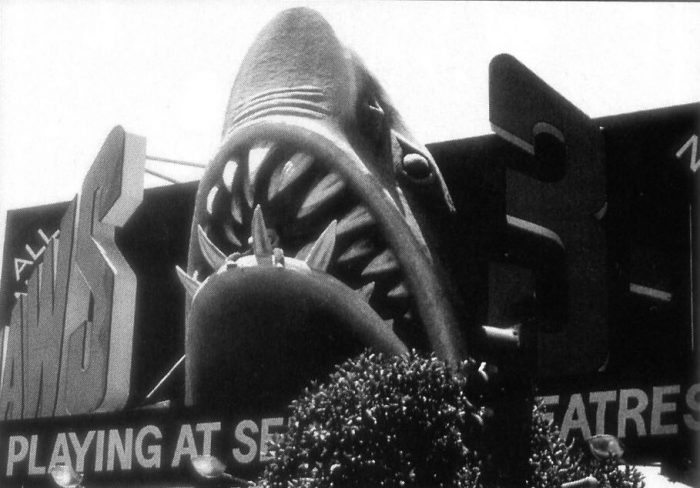 This generic theme park, named Marine World or Underwater World depending on which version of an early script you read, eventually became Sea World when the then barely ten years old Florida theme park agreed to serve as a filming location.  This led to some of the most jarring product placement in a movie ever, until Bond started drinking Heineken.  It also led to confusion, as the only way for a Great White shark to make it from the ocean to Sea World Florida, in reality, was on a bus.

I also remember the disappointment, on my first visit to Sea World many years ago, at the size of the lagoon in reality.  In the movie it looks vast, able to hide a 35 foot Great White, able to house the Undersea Kingdom, with man-made beaches and fleets of maintenance craft.  In real-life it’s a big pond in the centre of the park.  Movie magic!
When John Hancock was fired from Jaws 2 it was suggested that Production Designer and second unit director Joe Alves team up to co-direct with Editor Verna Fields.
This time around he got his chance and headed off to Navarre, near Pensacola, Florida to film the scenes not set within the confines of Sea World.
Here they filmed the waterski sequences set outside the park, and watching these is where I fell in love with Lea Thompson.
Then it was off into Sea World for the location shoots, followed by a lengthy stint in the Universal Studios tanks back on the California Lot. 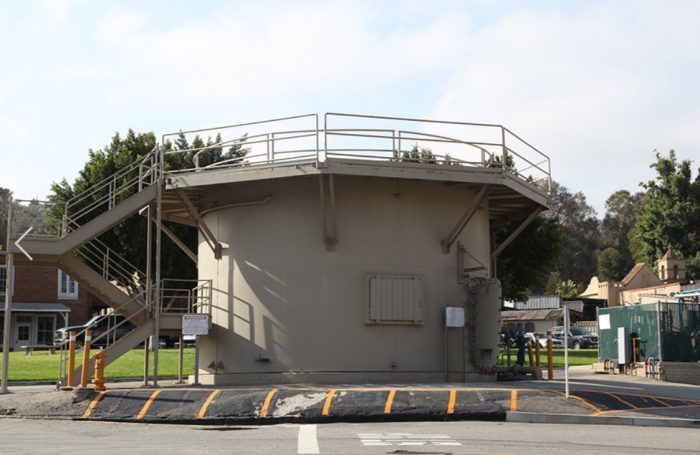 Then post-production could start in earnest.

Full Speed Ahead… To Ruin!

Just like the late 2000s, cinematic 3D was undergoing a much-hyped, but ultimately gimmicky and doomed to failure, revival.
And just like with Avatar 2, it was to fall to a watery tale to prove that 3D is a bit shit.
Alongside Friday 13th part-whatever and Amityville part-at least two too many, things boinging and pinging and looming off the screen seemed a good fit for a horror(ish) movie, and therefore the movie was cursed.  Struck by a fatal body blow from which it could not recover.
Firstly, it meant that some contrived scenes had to be created to give many things an opportunity to ping and boing, such as an unconvincing severed arm, or a crossbow fired straight at the camera.
And clearly, the technology wasn’t quite ready as we see from some truly atrocious blocking and fading during a mini-sub sequence.
Secondly, and the biggest issue, was that in a shark movie the shark had to loom.  Really loom.  It has to feature massively and similarly ping and boing at every given opportunity.
The one fatal flaw in their otherwise perfect plan was that the shark was shit.
Massive impediment in your shark movie.
Not only is it unconvincing, but it is also perhaps the most useless Great White in the history of shark movies.
Witness it’s rampage through the park on a busy day that apparently causes the sum total of one cut on Lea Thompson’s leg, and that’s it! Everyone else escapes without a scratch.
Maybe she wasn’t hungry?
Which is a shame.  A real shame.  As I have a controversial opinion here.  Jaws 3 isn’t all that bad.
Put away the pitchforks and the flaming torches.  I will explain why.
First of all the central idea is solid.  Large, hungry Great White shark trapped in a confined location in close proximity to many potential meals.  The aquatic theme park setting is fun and it works.
Secondly, there is a secret sauce to shark movies that not one single attempt outside the Jaws franchise has ever cracked, which is why the original Jaws has still never been beaten in this genre.
It’s not hard, but as we at FG know too well, mostly everyone in the upper echelons of Hollywood is a fucking retard so the fact they missed it doesn’t surprise us.
The secret is this.  The human characters are more important than the shark.

That’s it.  In Jaws just about every character is totally believable, understandable, somewhat relatable and interacts with other characters in a totally believable way.
In Jaws 2 this average was way down but driven through by the sheer force of Schneider, Gary and the excellent support of Murray Hamilton.  Outside of those three, the cast is largely forgettable.
So I am going out on a limb here when I say the cast of Jaws 3 is really good.  Despite the hokiness around them they all excel.  They play it totally straight among the insanity on a par with the cast of Flash Gordon.
Mike and Katherine make a genuinely believable couple.  Their affection seems genuine. Their interactions with each other come across as a real couple.  The best example of this is their hungover discussion in the kitchen the morning after the night out with Sean.
Sean and Mike feel like actual brothers separated by work and college.  Any links to the previous two movies are wisely brief and pass at speed, not allowing you to dwell on the ridiculousness of another giant shark in their life, but are just enough to anchor them with a shared past.
Philip Fitzroyce is gloriously over the top, smarming and smirking his way through every scene, pausing only long enough to chew some scenery.  His long-suffering bag man Jack, grumpily scowling alongside Fitzroyce excellently portrayed by PH Moriarty is almost my favourite character in this movie.
I say almost, because of the tour de force that is Calvin Bouchard.
Louis Gossett Jr, straight off his Best Supporting Actor win, brings life to what would normally be a two-dimensional substitute for the Mayor of Amity.
Just like Vaughn he also manages to be sympathetic while being the closest thing the movie comes to a bad guy.
Without decent characters, a shark movie can have tens of inventive attacks played out with gruesome SFX excellence, but it will still fail to register at all.
I put it to you, the Film Goblin jury, that Jaws 3 has excellent characters, a great premise, and is only eventually let down by the shit shark.  A fairly major issue in a shark movie, I will concede.
What do you think?  Tell us below.
[amazon_link asins=’B008XBHEOI,B009CG9CXO,B009CG8VOU,B008XBHHTU,B07GYYWMFM,B01MTA3FXE,0345544145′ template=’ProductCarousel’ store=’filmgoblin-20′ marketplace=’US’ link_id=’f9b2831f-1383-11e9-9c38-a334bd26aa52′]