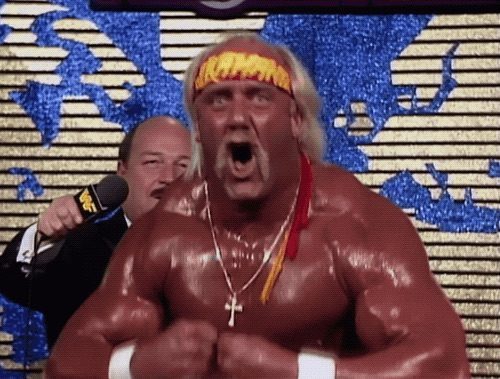 The current state of pro wrestling is pretty bleak. Ratings for WWE programming are in the toilet. TNA is barely in business. And though Ring of Honor seems to be gaining some traction and positive press, it’ll never be a household name like WWE or WCW.

The great stars of the 80s and 90s mainstream golden age of wrestling are getting old. Those who can are moving on to movies and TV as The Rock has obviously done with great success. Sadly, many more stars are passing away from the rigors of the ring and a hard life on the road coupled with harsh pharmaceutical tolls.

Macho Man is gone, as are The Warrior, The American Dream, André the Giant, and Hot Rod. The entire Von Erich family besides Kevin are dead and we almost lost The Nature Boy this past year. 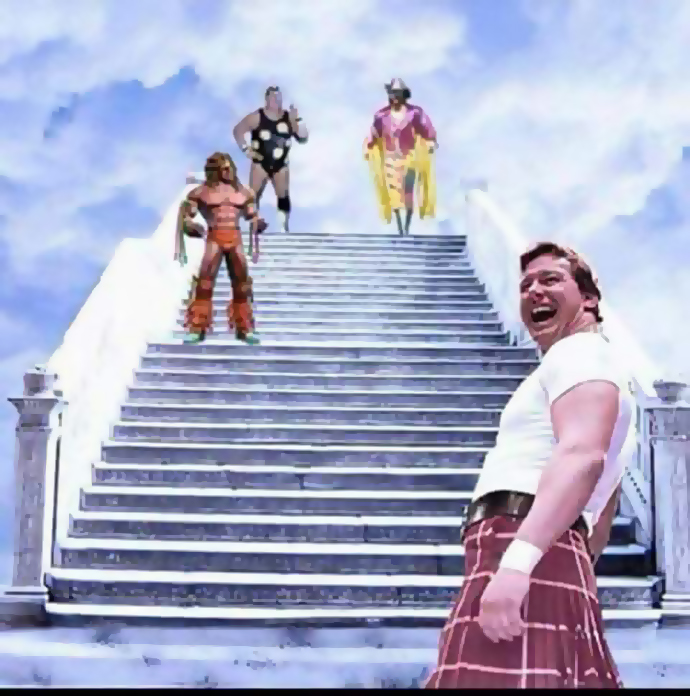 The Undertaker is old and looks it with an almost bald head, the few remaining tufts of hair dyed bozo orange, a big fat belly and man boobs stuffed into his spandex and pleather Dead-Man costume. And he can barely move.

HHH still looks like he did 20 years ago minus his hair. However, playing the role of wrestler coupled with years of leg injuries and running the company with his wife and father-in-law is a huge stretch. Frankly, he was never really a Mount Rushmore talent on par with Hogan, Flair, The Rock, Dusty or Stone Cold.

Brock is truly a monster but his heart is really in a return to MMA and even though he’s the champion, the WWE is decidedly not his main focus.

Ronda Rousey has “it” and she’s a beast while Charlotte Flair is on the verge. Maybe the future of the WWE is female? They seem to be the only two with “it factor” and both of their respective matches at Wrestlemania tore the house down.

No Mary Sue crap here, they earned it fair and square. 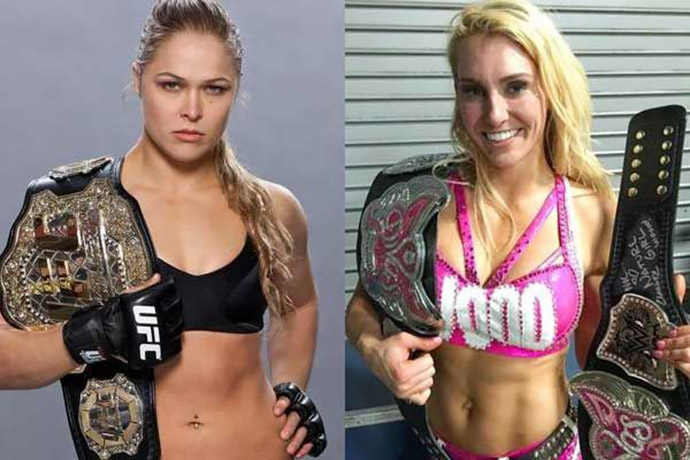 The company that for years has had the golden kingmaker touch has slipped big time in handing the keys to Roman Reigns, a guy with all the personality of a 10-year-old pack of gum found in a sock drawer with the drawing power to match. They’ve bet the house on him being the next Rock for some reason, I think mainly because he sort of looks like Jason Mamoa (who Warner/DC is foolishly betting on for some reason and a guy with no more charisma than Reigns) regardless of Reigns’ greatest accomplishment so far being booed out of every building he appears in.

There are some great current stars but none of them have that Michael Jordan/Ali type of aura needed to bring back huge ratings and house show numbers for the company. No one that is a must-see talent.

AJ Styles really is a phenomenal in-ring talent, and he can talk too, but the company would never push a guy with a thick southern accent that barely hits 5 ft 9 in thick height assisting lifts.

Which is a shame, because if they went back to the original formula things might change. Make the fans suspend disbelief through engrossing real life storylines and/or larger than life superheroes. Attaining a title actually matters. Feuds mean something; you believe the hatred –  the passion – is real. You never hear things like “this title put food on my kids table and a roof over our heads and you’ll have to kill me to pry it from my hands.”

A guy like AJ would be a huge star back then when you thought these guys really needed the money to buy groceries for the family. Now days why exactly do they wrestle? Titles don’t mean anything, you never hear about the hard life on the road, scraping from town to town, all for a shot at that title that could bring them and their families a better life.

Go back and listen to Dusty or Flair’s old promos on YouTube or any of the greats in the early 80s. You believed.

The talent became interchangeable performers and the blander the better: an Outback Steakhouse menu designed not to dazzle but to appeal to the simplest palate. Off the menu: blood and any overt examples of real aggression. Injuries are no longer “sold,” meaning if a wrestler was hurt during the course of a match or attacked by the heels outside the ring there would be a long, steady buildup of their return, as if the athlete had sustained a real injury.

Bland cookie-cutter announcers that look like Ken dolls and sound like any given ESPN announcer: selling the brand, not the story of the match itself.

Most significantly: pro wrestling can not be called pro wrestling. It’s now pillow fight “sports entertainment” for soyboys and the rest of the pussy Millennial generation brought up to worship commercial marketing of every aspect of life and 14th place trophies.

3. The MMA world took the original, old school pro wrassling formula of personalities who can talk, blood sweat and tears for a paycheck that meant something, and titles meaning everything and combined it with real fighting. And a lot of the UFC stars of today were little Hulksters and MachoManiacs when they were kids. Old school and more hard-core fans simply stopped being Pro Wrestling fans and became MMA fans. This is a pretty easy transition when the “sport” they spent a life worshiping told them to go fuck themselves. Neither their opinions nor patronage mattered. This is what the WWE did with its PC era.

Exactly what Disney did to lifelong fans of Star Wars.

The question is, who can save wrestling?

However there is one storyline, the ultimate storyline, we need to see to bring back to the old magic, if only a little longer. That’s the story of redemption, the classic Rocky Balboa story of the aging hero who returns for one last hurrah and makes the world believe in miracles again.

The return of Hulkamania.

The man who singlehandedly ushered in the mainstream golden era of wrestling.

The man who is still a household name with the likes of Micheal Jordan and Muhammad Ali. The man whose 24” pythons slammed giants.

The 80s are hot again: Cobra Kai, Stranger Things, Ready Player One and Top Gun 2 are just a few examples of the resurgence and reboots of 80’s nostalgia. There is no single bigger icon of the 80’s than Hulk Hogan. This, coupled with a renewed pride in America, being American and American Exceptionalism make The Hulkster’s already written story of redemption ripe for a return.

Anyone in the media or politics who tried to make us feel guilty for being proud of this country are asshole pussies. No one likes an asshole pussy.

Part of the coolness of the 80s was our great economy. We had the world’s greatest military. Without firing a shot, the U.S.A. brought the fucking commies to their knees and brought down the Berlin Wall. We had a great president who took shit from no one, and everyone but the media loved. Sound familiar?

The 80s had the Chicago Bears, Iron Mike Ditka, The Fridge, and the greatest all around football player of all time: Walter “Sweetness” Payton. We had Michael “Air” Jordan. We had Magic and Bird. Icons, badass heroes with unique personalities that matched their still unsurpassed talent.

We had epic movie after epic movie. Raiders of the Lost Ark, Indiana Jones and the Temple of Doom, Empire Strikes Back, Star Trek II the Wrath of Khan, Ghostbusters, Goonies, Predator, Robocop, Superman II, Karate Kid, Rambo, Rocky III, The Road Warrior and so many more.

We had cartoons and badass toys like G.I. Joe, Transformers, Voltron, Star Blazers, Thundercats and He Man.

David Lee Roth was doing split kicks in front of packed stadiums on MTV. ZZ Top had hot chicks strutting their legs and Run DMC were the kings of rock.

And we had Hulk Hogan.

God damn it was a fun time to be a kid.

A couple years ago The Hulkster said some horrible things which were caught on tape.

Inexcusable, stupid things that according to him and anyone who’s ever been close to him were not who he really is.

Mind you, quietly and without publicity, Hulk Hogan has done more for children’s charities over the years than any other celebrity. There was never a make a wish kid whose request went unanswered. Children of all ethnicities, creeds and colors loved the Hulkster and he bent over backwards to reciprocate that love as in their final days. He was the ultimate hero and for his one mistake, was summarily erased from the WWE.

It’s a funny thing. How do you erase the biggest, most recognizable star of all time. The guy whose blood and broken back built the WWE. Hollywood Hogan then singlehandedly resurrected wrestling again in the 90’s for a new generation of more cynical, anti-hero fans.

Recently rumors have swirled that his return is a done deal; he has one more run left in him. At the recent Saudi Arabian tour the crown prince expressed disappointment at his absence. He even asked WWE management where Hulk Hogan was? Don’t think something like that isn’t lost on Vince McMahon. Hulk’s images and matches are appearing on the WWE website again and he was even mentioned on tv a few times. Capping this off, the recent highly rated HBO André the Giant documentary may have well been titled “André and Hogan,” as he was heavily featured. Much of the program was dedicated to their friendship and André’s passing the torch to a young Hogan. This was also promoted by WWE.

The Hulkster doesn’t need the money, he rebuilt the fortune that his ex-wife siphoned away. Add to that whatever Gawker settlement money he received to his already substantial portfolio. If he does return he’ll do it to an arena of 15,000 fans going berserk. Shaking the rafters. Chanting his name as he reaches out to the crowd to Hulk him up. Making right his recent sins he paid for in spades. He wants to end his story on his own terms. Frankly, the world owes him the right to do so.

Whether it’s one more match or one more run with the deck stacked against him it will be epic and it will grab headlines, for better or worse. In the world of pro wrestling any publicity is good publicity. Below is a picture of the Hulkster taken just a couple weeks ago. Looks ready to go to me.

”God created the Heavens and the earth, he created all the Hulkamaniacs. Then he created a set of 24 inch Pythons, brother!”