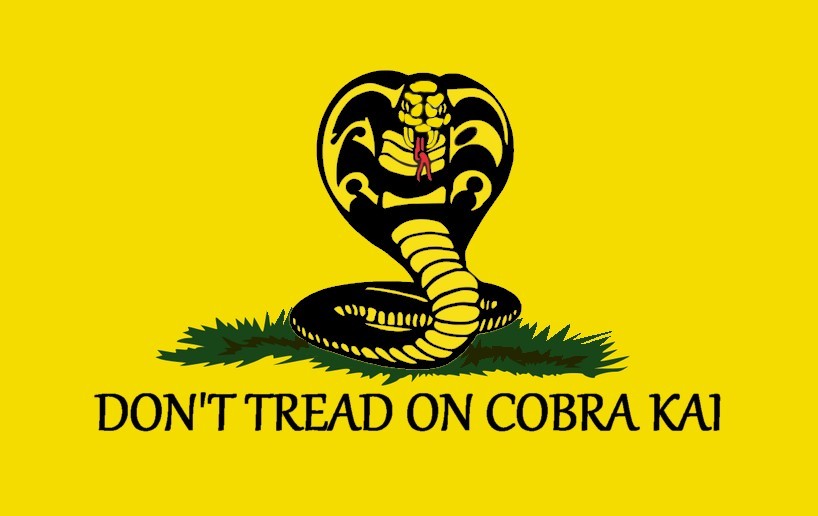 I’m Not Your Reviewer, I’m Your Sensei!

Alright so the first two episodes are free on Youtube. Haven’t watched yet? 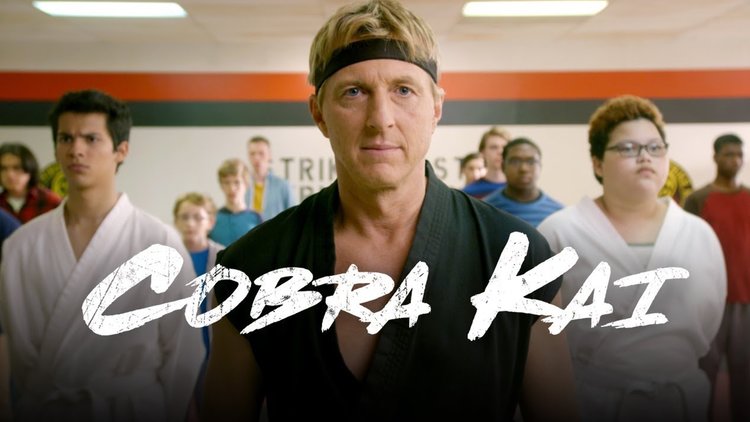 The tone is set. Johnny is broken. He’s got a teenage kid that he ignores. His ex-wife is a local cigarette hag lurking around the dive bars of Karateland. And Johnny? Well, Johnny is a drunk handyman. I’m not trying to say all handymen are drunk but Johnny is pretty drunk.

He does this trick where he chugs half of a Coors light (Is it his favorite? Or is it always on sale? We’ll never know..) and fills the rest with some clear liquor and chugs. Presumably some grade-A “knock you in a prison cell” slag. Now I know this seems irrelevant, but that made me feel like we had some experience behind the camera in this one. Some real life experience.

Johnny meets his new neighbor. Some skinny (in Johnny’s own words) ANNOYING DORK. And you quickly realize the parallels to Karate Kid going on here… But not in a bad way. Not in the way most remakes or sequels tend to pull it off. He’s the reluctant master and it’s awesome.

Soon thereafter Johnny saves the kid from some bullies after being mistaken for a homeless man. (Life after Karate, man.)

For that stunt he lands himself in jail for assault and further down the path of sucking.

He gets out of jail thanks to his stepfather (bad blood there). And after a few retro-cool 80’s montages of Johnny getting really drunk and driving his car around, he seems to be reminded of Daniel LaRusso at every turn.

Now a successful car dealership mastermind.. Daniel is rich, happy, and seems content rubbing his victory in Johnny’s face. But after a series of events leads Johnny to Daniel’s dealership.. LaRusso again tries to play the bully. Johnny finally realizes what needs to be done.

Johnny will rebuild, and he will start with that dork he saved from the bullies.

Miguel at first impression seems dweebish. A timid and hopeless mess coddled by his mom. However under the tutelage of the number one babe magnet Johnny Lawrence, he’ll be listening to Ratt and using hairspray in no time. Which is exactly how it goes.

Miguel’s high school adventure plays out like you would expect but it’s so much more awesome now that the teachers just let the kids fight it out. It’s very progressive, especially when paired with the fairness and gender studies lectures they receive during lunch.

Then there’s his crush, whom we are introduced to in the first two episodes.. She’s just so happens to be LaRusso’s daughter and that’s fine. Additionally, she’s dating the lead bully that tried to beat him up. That’s fine too.

So yeah, he’s going to have to kick some ass. He knows it. You know it. Johnny knows it. It’s meta.

You won’t know it at first, but you should call this kid BODYBAG JR.

Johnny’s training with Miguel is paying off big time. In just a couple of months he’s turned him from dweeb to machine. Miguel is ready. Ready to kick some bully ass. And save the maiden… and stuff.

So after the bully disrespects his future girl Miguel cracks.  He’s not gooing to take it anymore. Even though just weeks prior the bully brutally beats him up in the locker room, Miguel is ready (whatever that means).

Without fear he beats up the leader and his four friends in the middle of lunch (like a Power Ranger, and it’s really satisfying). All the while being filmed by the onlooking students (viral bra). The bullies say “FAM” and “LIT” and Miguel doesn’t. So there’s some real social justice going on here.

The videos of Miguel laying the smack-down instantly go viral and suddenly Cobra Kai is famous. With a web-page built by Miguel himself, Johnny is flooded with new participants. But are they worthy?

They are weeded out through insults and basic degeneracy. Johnny removes the sensitives from the equation the old fashioned way. With words. And yes, they try to defend themselves with their pre-rehearsed notions of “be nice always” but that shit doesn’t fly with Cobra Kai. 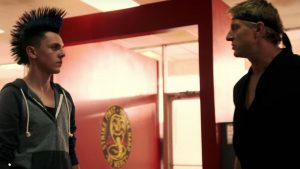 By day 3, he’s left with a core group of dweebs ready to be transformed alchemically into the 80’s doom crew Johnny always dreamed of. But is it that bad, really?

He takes them on for cash initially, then quickly realizes these kids were the bottom of the barrel. Now that Cobra Kai is essentially a gang feared by the entire school, he realizes he needs to watch his words more carefully. He’s wielding a power that can influence the lives of all of his students, for better or worse.

You can tell Johnny is torn by this revelation throughout the rest of the season but carries on regardless. Just like he was taught. He buries it deep down inside for alcohol to bring up later.

His son is a piece of shit. And looks like he’s doing a Hansen cosplay. But his arc is humble and he ends the season on a heartwarming note. (Did I just say that?) Though not with Johnny…

Daniel LaRusso begins to hit new lows after one of his billboards is vandalized. He’s starting to realize this glamorous life has a cost and it’s not just in cash. His employees make fun of him, his daughter gets ridiculed at school and he knows he’s been wrong. But when he learns it was Johnny that vandalized the billboard, all hell breaks loose.

Daniel goes on a campaign to shut down the Dojo. It almost works, but the shady tactics bring great shame to his teachings. Realizing he’s become disconnected, Daniel revisits Miyagi’s grave.

In probably the most tearful moment of the show we get this loving scene of Daniel trimming the Bonsai tree on his Sensei’s grave. I won’t ruin it. It’s a cheap shot, sure. But a welcome one.

Daniel clears out his old Dojo and begins his training once again.

Let me skip backwards a little bit. Johnny’s son is not happy with pops. Even though he’s been making a conscious effort to help, Johnny’s spawn is spiteful. He lands a job at LaRusso’s dealership to get back at dad and although Daniel doesn’t know… Johnny doesn’t know… but we know. Uhh, anyway…

Daniel can’t find anybody to train with and he’s getting anxious. He needs to wax on-wax off somebody. Johnny’s kid is doing great at the dealership and he catches Daniel’s attention immediately. They hit it off. And now Daniel can wax off comfortably.

All-Valley Karate Tournament Or The Return Of The Cobra

Hawk has transformed. Miguel is powerful. Aisha, Johnny’s only female student, kicks tremendous ass. Her mere presence throws fighters off their A-game and Johnny loves it.

The Dojo’s rent is paid. Johnny doesn’t drink as much. It’s time to redeem his high school failures through the next generation… but it won’t be that easy.

I guess “sweeping the leg” (while not disqualifiable at the time) earned Cobra Kai a lifetime ban from the tournament. But, when your tournament attendance numbers are dipping, vendors are pulling out year by year and your council is made up of volunteers, exceptions can apparently be made. LaRusso is on that council and tries to uphold the ban but no luck…

More girl power ensues when LaRusso’s daughter goes back to her roots. She is shamed. Both in person and on the internet. So what do you do at that point? Hang out with dorks of course.

She begins to have a little fling with Miguel and they become an unannounced couple. Miguel’s training has reached critical mass and the Cobra begins to shine through day by day.

Daniel teaches the Hansen lead singer the basics of “Miyagi-Do.” The effect on the lonely kid is tremendous, he goes through a weird “Lit” and “fam” themed storyline before all of this that you can watch to figure out yourself. It’s enough to get him into Daniel’s hands story-wise and I’m fine with that.

The kid is a natural and Daniel is quickly obsessed with being in the role of Sensei. In a charming montage our beloved Karate Kid has completely missed the FUCKING POINT. If Miyagi were still there he would slap Daniel in the face and make him stand in the coastal mud overnight. Naked. Reciting his wedding vows in Japanese for this insolence.

Anyway, Daniel takes the vanity of the lessons to another level but the kid loves having a father figure. It’s really innocent and the kid kicks ass at Karate too, so fuck it.

Before the tournament, Daniel’s own doom crew takes vengeance into their own hands by trashing Johnny’s classic single-guy car. Johnny quickly discovers who they are related to and goes to sweep the leg once again. This time in Daniel’s own backyard. 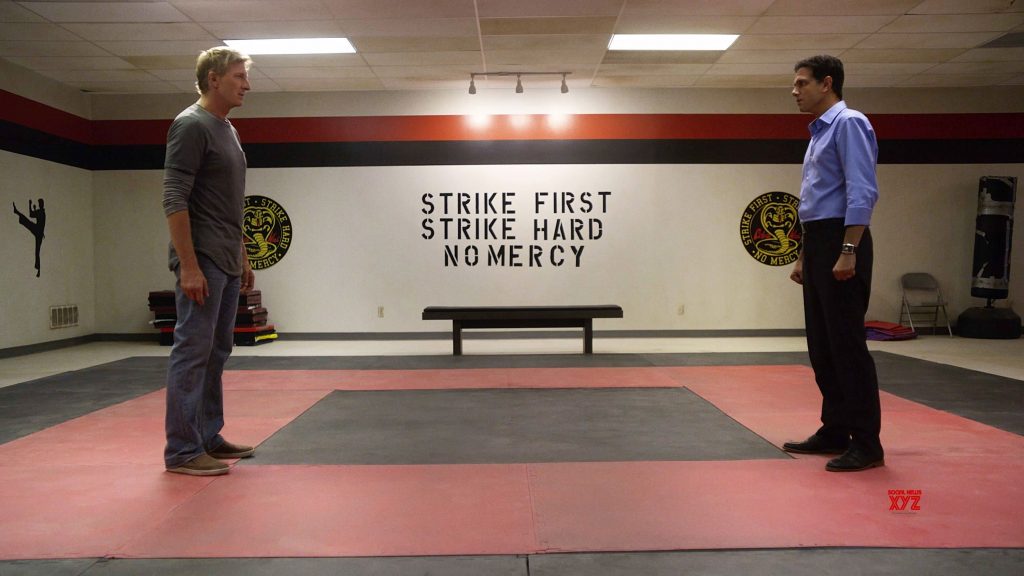 But Daniel’s wife has her uses, besides bad parenting she’s a fantastic negotiator. They sign the peace treaty by making Daniel buy Johnny a new car, (Good thinking) though Johnny is reluctantly thankful. Danny and Johnny stroll over to the lot and take a test drive. Stopping at some memorable spots and rehashing their differences (they even grab a drink for the first time ever). It’s a great few scenes that all fans of the old movies have to watch. So I won’t ruin it.

But the end must come. Daniel and Johnny agree to go back to the mat for old times sake. One spar to rule them all.(Awesome right?) Nope, Johnny notices his kid at the Dojo, Daniel learns Hansen is Johnny’s kid. Not good.

In Johnny’s mind his students are his children now. And when he takes them to the tournament he brands them with the ultimate sigil of honor. The black sleeveless Cobra-Kai karategi. 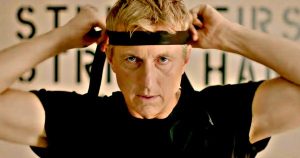 Daniel has to attend the tournament at the behest of his wife. Who also reminds him that his company sponsors the tournament every year and his appearance is mandatory. Daniel wanting no part goes anyway. But wait, Hansen has signed up, registered with no Dojo. Is this true? Yes. Daniel is lit. I mean excited! (Kick their asses harder!)

Later in the tournament Hansen starts to become a mirror of Daniel’s own efforts years back. It’s pretty cool. But yelling screaming and cheating are way more hardcore.

I won’t spoil the end. Flippy-dippy equality guy gets Miguel’ed and Hawk has his vengeance. But the last 45 seconds are the real treat of the entire series.

GO WATCH IT SO WE CAN TALK ABOUT IT!