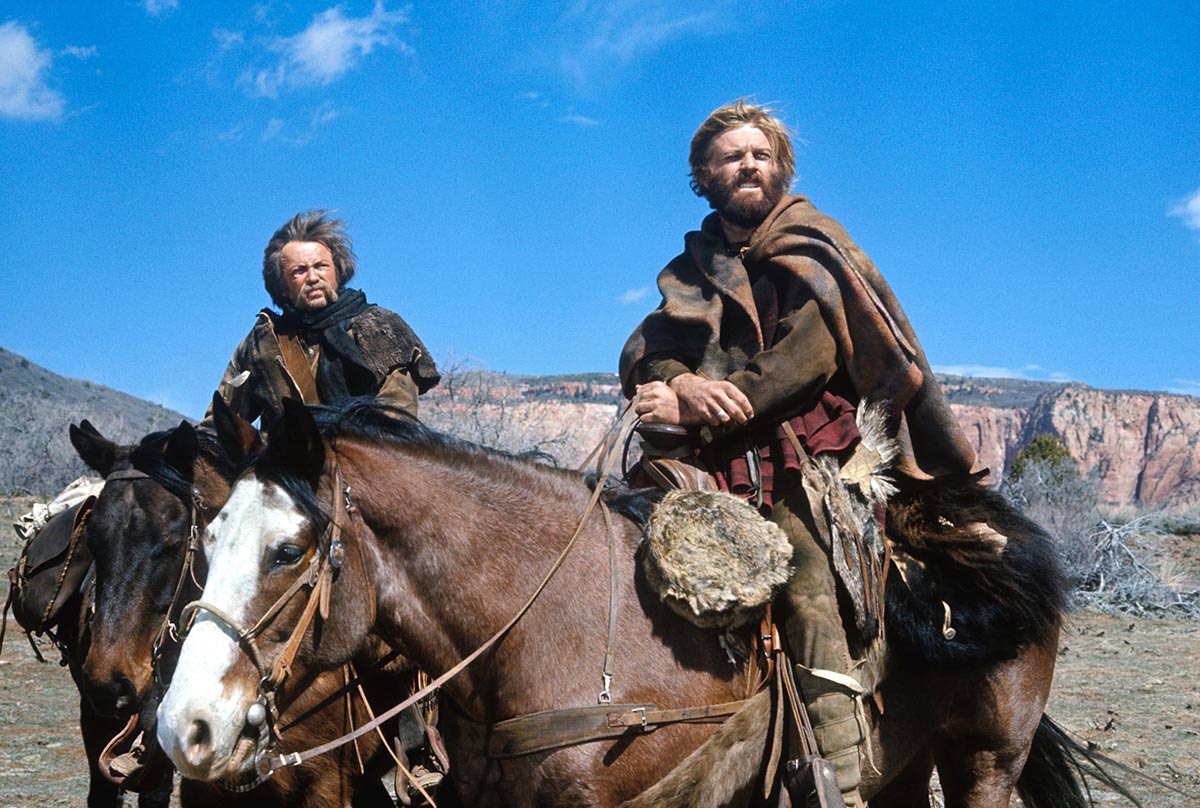 Jeremiah Johnson is a very odd and excellent movie.

Based on the true story of Liver-Eatin’ Johnson, the movie stars Robert Redford as a Mexican War veteran who tests his mettle by living off the land.

This is a conscious choice. He steps off a riverboat in his Union blue, buys a couple of horses, some traps and the wrong rifle and just wanders into the Rocky Mountains to begin his new life as a mountain man.

The angle? He has no idea what he’s doing.

What plays out over the next couple of hours is a bizarre post-60s, wish-fulfillment fable as written by James Milius.

We get everything one can ask for from the genre: bad Indians (Crow), good Indians (Flathead), grizzly bear, wolves, blood vendetta, hand-to-hand combat, cabin raiding, wagon burning, native burial grounds, crazy settler women and — of course — a rendition “Shall We Gather At The River.”

The only thing missing is a train robbery.

However, unlike most westerns, these events and encounters don’t really unfold in any kind of linear way; they just kind of happen.

No town needs rescuing, no gold needs stealing, no girl needs saving. There is a notion of a plot that develops about half-way through but it’s almost more of a sub-plot.

The real story here is how a man, I’m assuming a city man, learns how to survive through all the perils and peoples of this beautifully harsh land. It’s about Johnson, played by Redford at his laconic best, how he develops his skills, hones his senses, makes friends and vanquishes enemies.

In that way, it really mirrors the time period when it was made — as my night-friend Penelope remarked, “It’s the ultimate 70s movie.”

The dirt bath of the 1960s, with all of its impossible promises, was over and the boomers began to realize that we really couldn’t all get along.

That guy who was preaching “share and share alike, brother” really just wanted to smoke all your grass and steal your woman.

So, a lot of people dropped out. They left the cities and the suburbs, moved back to the land and started settlements and communities. They grew their own food, milked their own cows, fix their own vehicles, made their own clothes and generally eschewed the unnecessary trappings of modern life.

Director Sydney Pollack captures the spirit of this era perfectly. There’s a buoyant hopefulness to Jeremiah Johnson that helps elevate the tale from mere grim survival story — and it gets very grim — into something of a latter-day parable. It’s like a self-help guide with mythological milestones.

This spirit of optimistic self-reliance and misfit communalism resonated with audiences.

Made on the heels of the 1971’s unrepentantly hard-boiled and bleak McCabe And Mrs. Miller (5/5) for around $3 million dollars, the movie played in theaters around the US and Canada for almost 3 years, ending its run with $44 million at the box office. That’s the equivalent of pulling down $250 million in current dollars, $70 million more than The Revenant (4/5) made back in 2015.

Adjusted for inflation, Jeremiah Johnson made more money domestically than any western save Dance With Wolves (3/5). And at a time when there were half as many screens.

Filmed on 100 Utah locations selected from over 20,000 visited, the production was threatened to be shut down due to hazardous winter conditions.

Eventually, Pollack mortgaged his house, put up his own money to finish the shoot and then returned to the world for 7 1/2 months of editing. It was in the editing room that Jeremiah Johnson found its story and purpose:

“It was a film where you used to watch dailies and everybody would fall asleep, except Bob and I, because all you had were these big shots of a guy walking his horse through the snow. You didn’t see strong narrative line. It’s a picture made out of rhythms and moods and wonderful performances.”

That is really the best way to describe the movie: rhythms, moods, great performances buttressed by incredible scenery and those unique Milius characters and dialogue.

It’s an idea, an ideology, a lifestyle. Maybe even a challenge.

The last shot is one of the most Hard Style things I’ve seen committed to film. I will let you discover the power of that on your own.