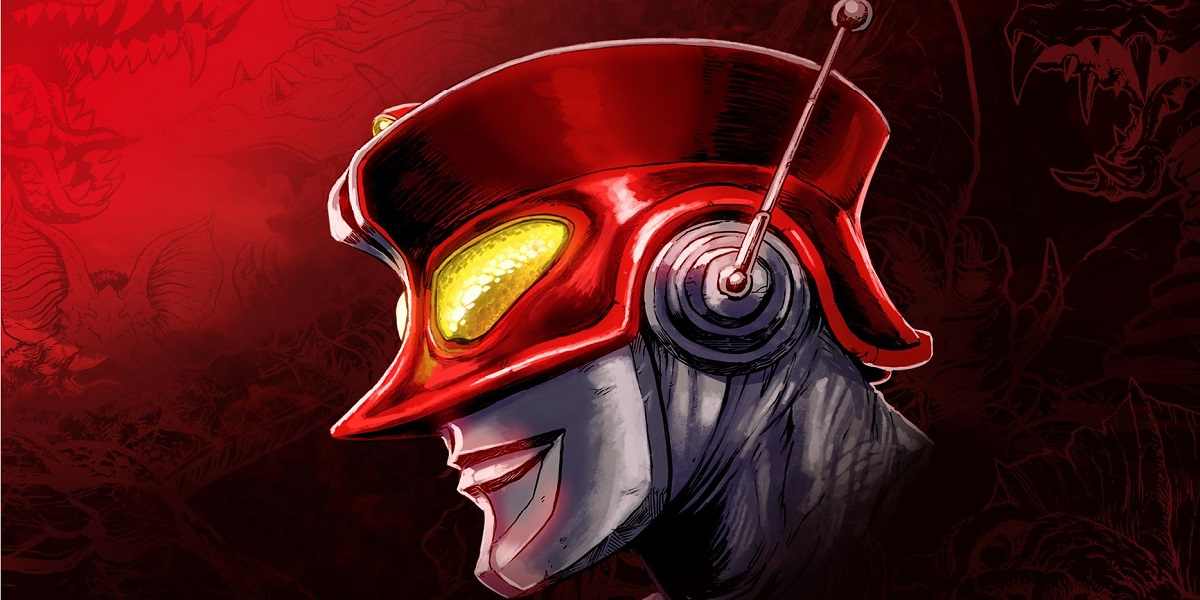 Redman: The Kaiju Hunter Volume 1 by Matt Frank (Godzilla, Transformers) has been recently released in the US by Night Shining. Respected on both sides of the Pacific for his talent for depicting giant monsters, Frank brings an intriguing story amid the dynamic fights between monster and hero.

It’s based the Japanese television show that ran in short segments on the 1972 Japanese children’s show Ohayo! Kodomo Show for 138 episodes. The comic comes on the heels of a renewed interest and newfound cult status for the character. 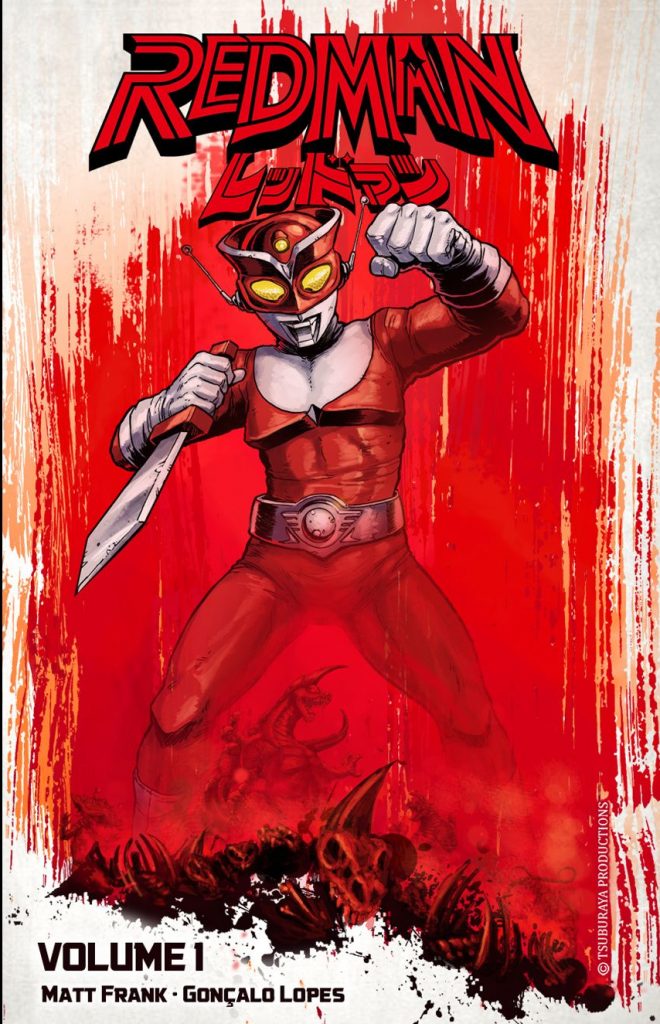 Who Is That Guy?

The show was produced by Tsuburaya Productions of Ultraman fame. There were many Ultraman imitators in the 1970s, but the fact that Tsuburaya created Redman allowed them to actually use monsters from the Ultra Series.

The monster suits were hastily made and there were no miniatures, so it really looks like men in suits fighting in a field. There is no human component or story beyond Redman going from battle to battle.

For over 40 years Redman stayed in relative obscurity. There was a Japanese LaserDisc release, but he was mostly a footnote in the history of Ultraman. Then, everything changed when Tsuburaya started releasing the show a few episodes at a time on their official channel in 2016. A new set of eyes watched the show and noticed that there seemed to be a dark streak for something that was supposed to be a kiddie show. 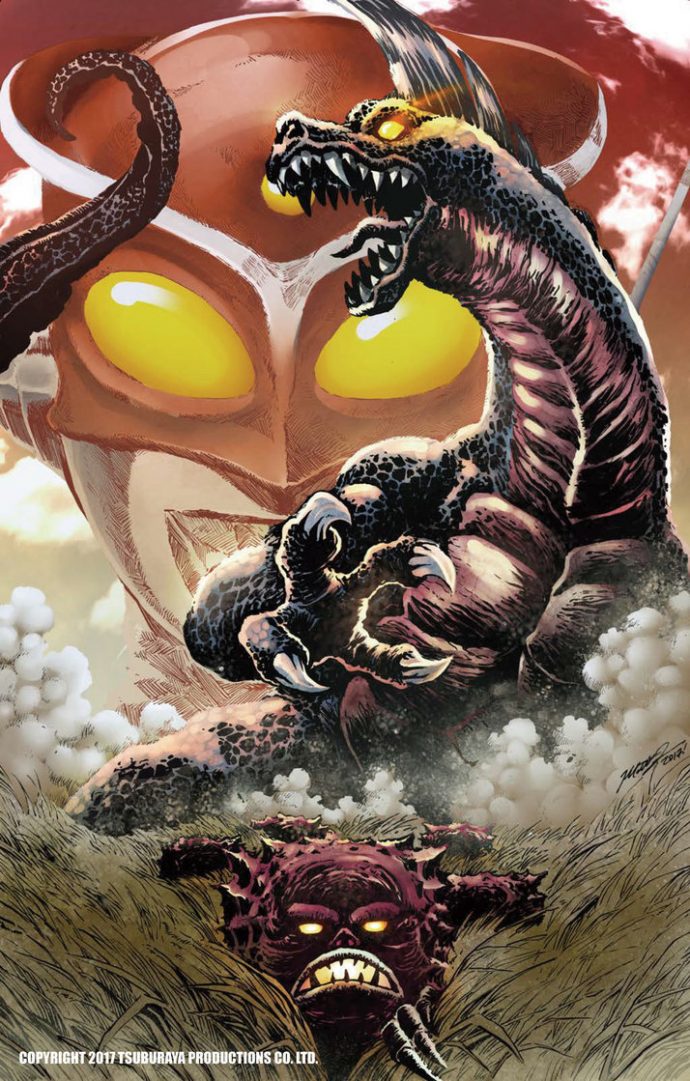 It appears the intention was just to show a hero battling monsters for a few minutes to entertain kids, but an older, modern audience could not help but comment how Redman came across as a relentless monster hunter. After a few episodes, Redman seems to be stalking his prey. Monsters would simply mind their own business or actively try to escape and Redman would run them down and kill them.

The crude no-budget way the show is shot creates an almost documentary feel like some of the grindhouse horror films of the 70s. The show has been referred to as “giant monster snuff films”.

Some Japanese fans view it less as a special effects (tokusatsu) show and more as suspense horror. It really is hard to view the character as a straight hero once these connotations are brought up.

Bringing It To The Page

The comic brilliantly brings this new context into story. There is minimal text (such that the Japanese version was bilingual) but Redman is given more dimension than in the show. He seems aware that his zeal borders on murder.

There are parts that play close to events from the show and those that differ. While the viewer questioned Redman’s motivation from the show, in the comic it appears that Redman is also grappling to understand his role.

There is a great nod to the awful suits used in the show where the monster Kanegon is depicted as the shoddy suit created for the Redman series in the monster’s memories.

It is unclear what those memories mean, but it ties into the otherworldly feeling of the show. There is also some fun non-verbal communication as the monsters discuss the need to team up to save themselves from being hunted.

Throughout the story there are hidden cameras capturing Redman’s battles as they are viewed by Alien Baltan (a well known Ultraman antagonist). This ties into the “snuff film” aesthetic of the show.

The story ends on a cliff-hanger, so there are no answers for our enigmatic protagonist. The story teases some actual answers to where and why Redman fights. It will be interesting to see how things continue and to learn more about why Redman seems to fight monsters endlessly. 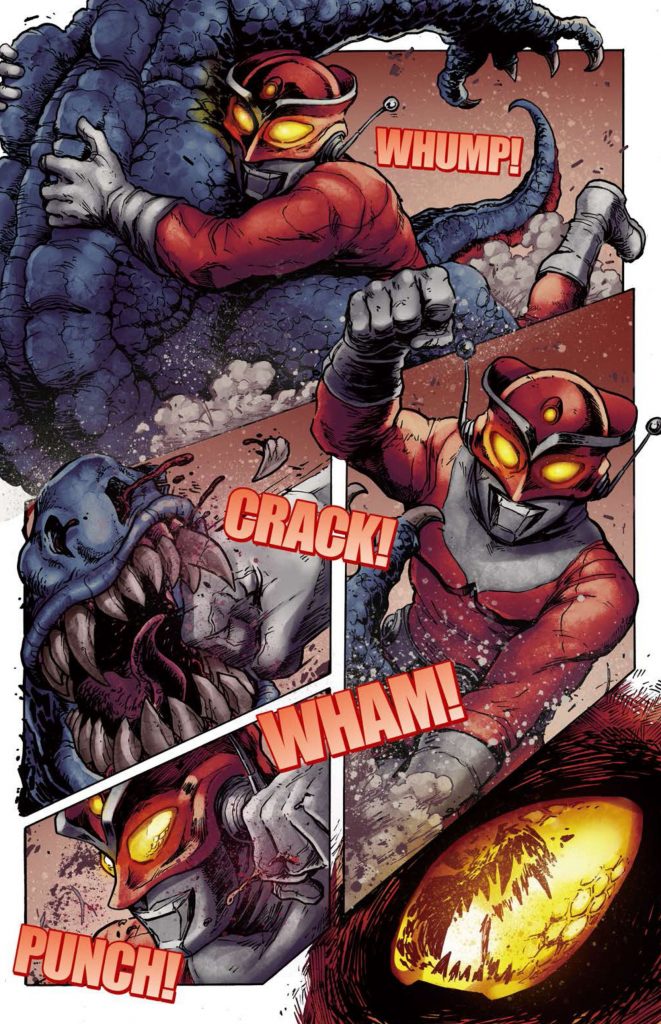 This really is a fantastically drawn comic. With very little text, this is a story that truly takes advantage of the visual medium. Some of the panel layouts and a few effects and stylizations seem influenced by Japanese manga, but it’s not too much for any readers that are put off by that style. There is plenty for both comic fans and monster fans to enjoy.

The comic, as well as other official Redman merchandise can be purchased directly at Night Shining. 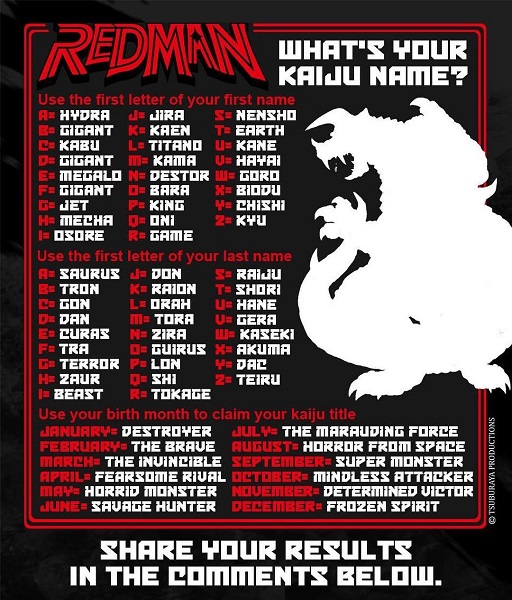