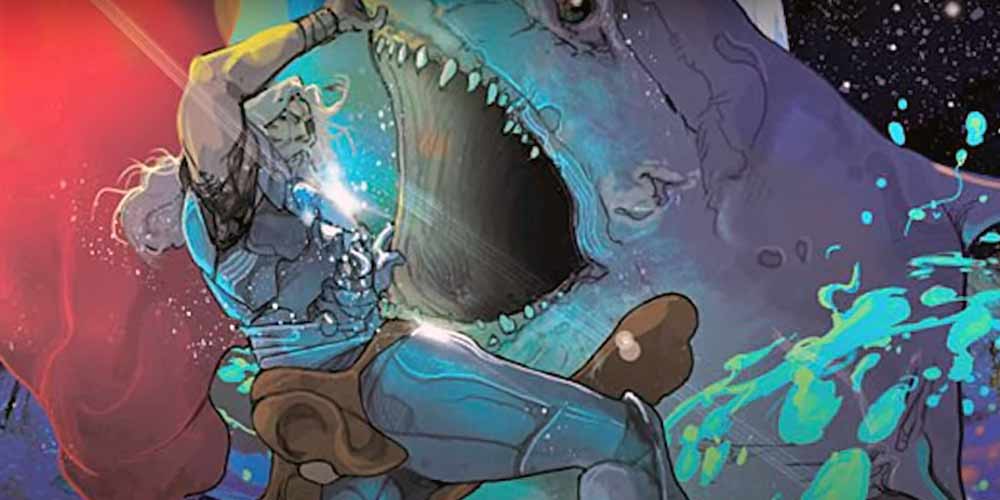 Here’s some interesting and maybe exciting news for those anticipating the return of both Thor and Taika Waititi to the directors’ chair in, the so far not delayed, Thor: Love and Thunder.

I know what you’re saying. Been done and done well in such fine fuckery as Sharknado but please know even the masters borrow for the geniuses that have come before them.

Turns out space sharks — or Starsharks — have a lengthy history in the Marvel-verse.

They are like our sharks on earth except they patrol the orbit of Gorr the God Butcher’s no-name planet and feed on the remains of the gods he killed. If the name Gorr rings a bell to you non-Marvel readers he’s been mentioned as the possible main antagonist to task Thor in the forth (hee hee) coming sequel.

If he had a tinder profile it would sound something like:

“Hi, I’m Gorr! I’m an alien from an unnamed planet who works in the armed forces. I have a bit of a medical condition due to a symbiote I named ‘All-Black’. To be upfront, I harbor a pretty intense hatred for gods due to them letting my family die and blame them for my loss of faith in general. I’m also a bit of an entrepreneur and have my own army #BlackBerserkers4Life with whom I seek out Gods to slay. All deities are encouraged to swipe left.”

And to you Marvel readers you’ll remember him as the main antagonist of the comic series Thor: God of Thunder.

StarSharks Can Only Mean One Thing! Well Maybe.

So does this confirm the villain of Thor: Love and Thunder?

Too many rumours surrounding that abound about which villains are in contention to be immortalized by Christian Bale. There’s Beta Ray Bill, former Thor-ally-turned-animal-themed-cyborg and also alleged original owner of Stormbreaker. Ares, the God of War. ‘Nuf said and Dario Agger, the corrupt oil CEO whose powers include not giving a fuck about Earth and also being a minotaur.

More unexpected zaniness is all we are guaranteed at this point as is Waititi’s modus operandi so we won’t really know what to expect until the first trailer hits which is obviously a ways off. What We Know So Far

Thor 4 will take place before Guardians of the Galaxy Vol. 3 and Chris Hemsworth will back and likely as fat-Thor. Tessa Thompson is also re-upping as Valkyrie and current Queen of New-Asgard. And, as has been widely reported Natalie Portman crawls back as Jane Foster and is expected to pick up the Hammer or Axe depending on whichever will sell more action figures to the hopelessly woke.

Though still mired in pre-production Thor: Love and Thunder are still set for release sometime in 2022.