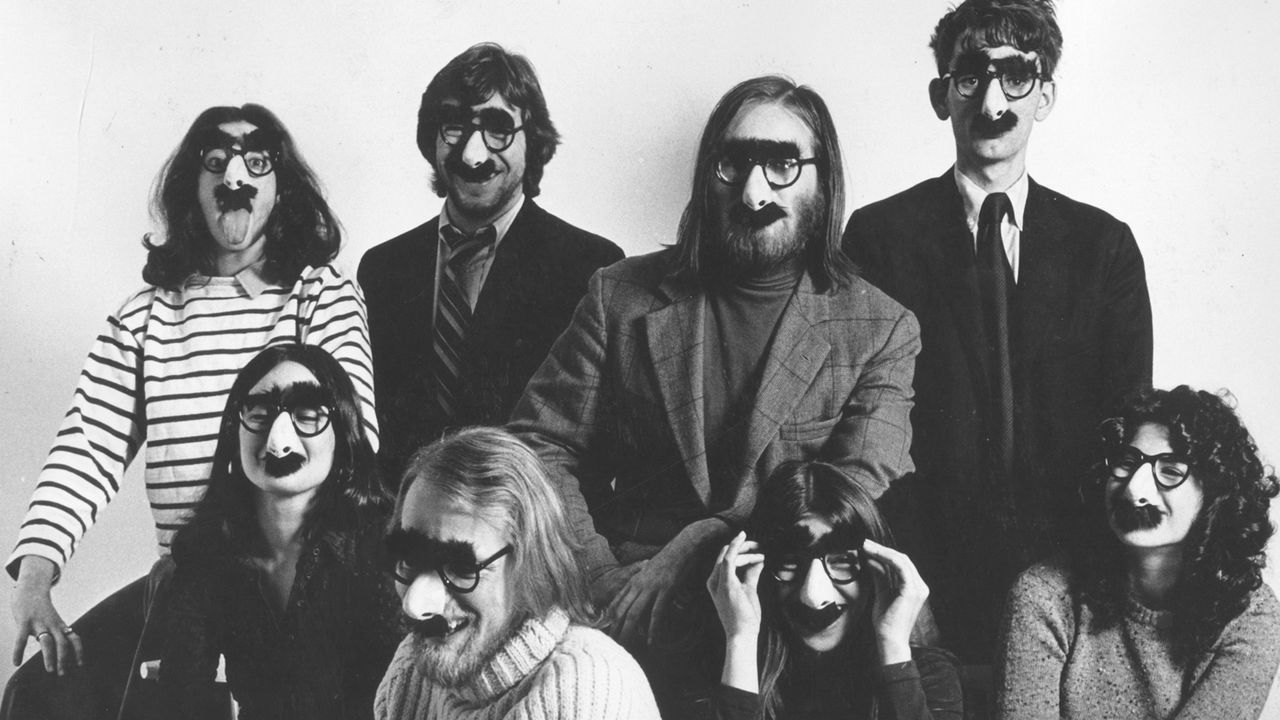 Sitting down to write this article, I did not expect to take a brief tour of cinematic comedy history, but I thought it would be important to at least superficially educate myself on a little bit of movie history.

I have my favorite comedies of all-time (Raising Arizona, Airplane!, Monthy Python and the Holy Grail) yet I also like to know what others are into.

[HTR Googles “best comedy movies of the past 20 years”]

[HTR is horrified and perplexed at the search results]

The Heat (Melissa McCarthy, Sandra Bullock) is included among the best comedies of the past 20 years. Hmm. Ok, then. Maybe I should’ve gone back 40 years.

Also on the various lists were some movies that I’ve never seen nor thought to consider comedic: In Bruges, Silver Linings Playbook, Best In Show. Also on the list was Enough Said (Julia Louis-Dreyfus, James Gandolfini).

I have some catching up to do.

Fortunately for my own peace of mind, the various lists included two that I do consider amazing movies in their own right as well as consistently very funny: O Brother, Where Art Thou? and Team America: World Police.

Again, more than just viewing a list of funny movies, I wanted to know how we got here as a nation, other than just changing generations.

How did we go from Bob Hope to Zach Galifianakis?

Beats the hell out of me and I won’t give you an answer here.

Fortunately for me and you, clues to the answer are provided in the excellent documentary Drunk Stoned Brilliant Dead: The Story of the National Lampoon. Wait, hang on. Before you shit yourself: no, The National Lampoon is not responsible for Zach Galifianakis.

I Learned It By Watching You!

My shallow research for this article sort of began where my own movie education began: with what my Mom considers worthy.

When I was a kid she showed me Bob Hope and Jimmy Stewart movies, and The Three Stooges. We watched Peter Sellers in the “Pink Panther” movies. That was the fare she recalled from her own childhood and wanted to pass along to me.

When she reached adulthood and birthed me, I tagged along with my parents to see just about every Eddie Murphy movie, as well as Steve Martin’s work. This was the comedy styling that my Mom now found amusing. A far leap from Mr. Hobbs Takes a Vacation to Trading Places.

Richard Pryor. Dan Aykroyd. Bill Murray. Chevy Chase. Rodney Dangerfield. John Candy. Robin Williams. I guess pretty much every kid in the 80’s had an awareness of these names, even if we didn’t each see all of their movies.

The 80’s sort of ended for me when my brother was born and my movie-life began to include stuff that he could watch. For a time, my parents were far more strict on what he was allowed to see vs what they had let me see at a comparable age.

Thus, consequently, my parental education on funny movies also ended and at the same time began to include peer education.

Ghostbusters. Ferris Bueller’s Day Off. Weird Science. Fletch. I saw none of these in the theater but some of my friends did and I was jealous.

The Wheel Of Pain

Yet in the midst of this cycle, especially in entertainment, are a few debatably brilliant people who change the game and send us off on a new trajectory, even if it’s only for a brief time.

From what we’ve covered so far, let’s step back and take a look at a few comedy pioneers that folks have enjoyed. By no means am I equating these folks with one another or any other comedic actor/writer. I just want to make a map of sorts and see where we took the left turn into a more “anything goes” style of comedy.

I think it’s plain to see that very quickly, especially in America, we went from wholesome slapstick to raunchy shock in the space of only a few short years. Peter Sellers almost feels like a place holder between Hope and Murphy, and I don’t know enough about movie history to say who else fits in there. I only know what I’ve seen.

Again, other than the very obvious factor of changing generations (from post-war to hippies to disco to 80’s hedonism)…what changed comedy and who changed it?

There’s an important name missing from the list above. You’ll find out whom shortly in this article.

Three alumni (Doug Kenney, Henry Beard, and Robert Hoffman) began to grab the world by the balls after graduation from Harvard. The documentary begins as they rise to power as a dominant comic force: first in print with The National Lampoon Magazine, then in radio, stage shows, and finally in a loss of power to a television show.

One of the great strengths of DSBD is that it allows each viewer to glean from the presented facts what they will. Nothing nor anyone in the chronicle is introduced with great fanfare, but “watching between the lines” allows us to see who was truly important, why they were so, and the precise moment they changed the rules for everyone.

The National Lampoon brand courted its most brilliant contributor and also, in my opinion, its greatest loss, in a member of Chicago’s Second City improv comedy troupe.

A long list of names that says, “We give rise to talented people.”

Yet of all the names and all the talent, one name stands out: John Belushi. A wild man to end all wild men. The wild man that elevated a group of comedic geniuses to a higher level.

Belushi helped Kenney and Beard add a dimension to their efforts that allowed them even further reach and greater reward.

I knew a little bit about Belushi because of my Mom. She was a big fan of his work, most especially The Blues Brothers.

But I never knew his history nor his true talent until much later, and most recently in watching DSBD.

I never knew there was a magazine, nor the other aspects of the brand, until I watched DSBD.

Thank Crom for this amazing piece of investigation, presentation, and heart.

I very highly recommend watching Drunk Stoned Brilliant Dead. Get a look into the people, the ideas, and the drugs that changed the comedy rules forever.

Please stay tuned to FilmGoblin for my companion-piece review of A Futile and Stupid Gesture.