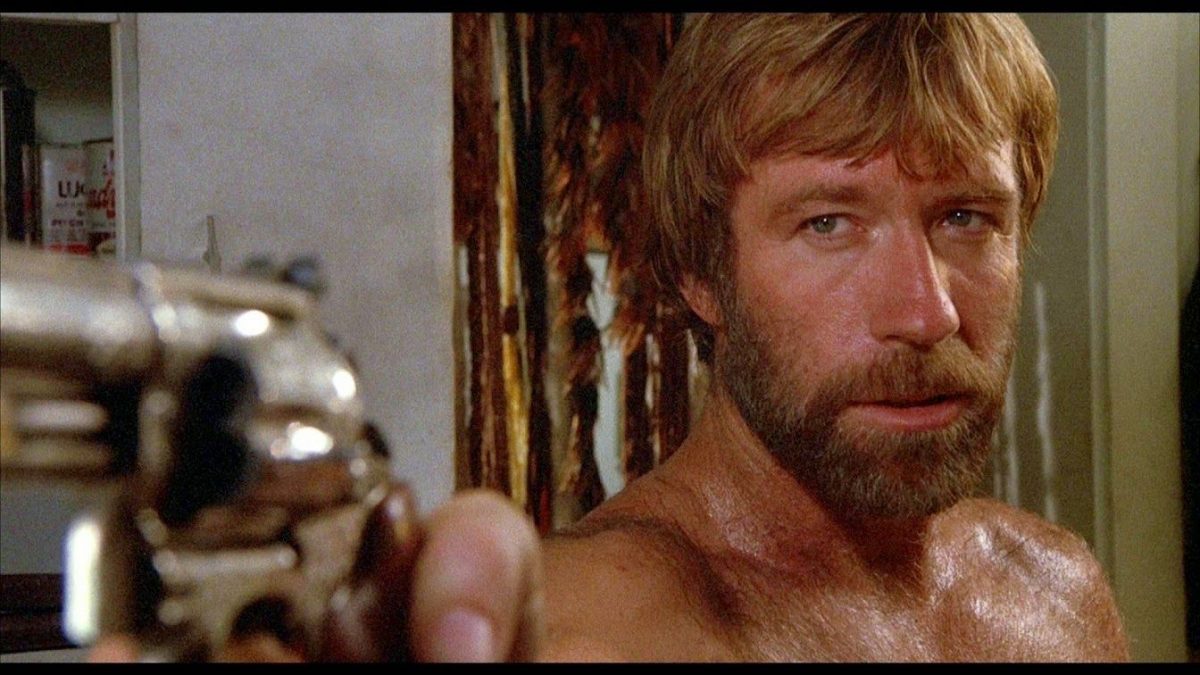 You don’t fuck with Chuck Norris. Unless you’re Bruce Lee it never ends well and when you think about it, it didn’t really work out for the Dragon in the end, did it?

Chuck Norris is Lone Wolf McQuade. Legendary Texas Ranger who has a wolf for a sidekick, lives in a shack and dispenses with bad guys with his fists, with his Smith and Wesson .44 magnum long barrel (one hell of a gun btw) and in this film a well placed grenade.

Lone Wolf McQuade isn’t your normal Chuck Norris actioneer, quite the contrary. Lone Wolf McQuade is at its heart a well executed homage to Sergio Leone and Sergio Carbucci spaghetti westerns like Django and The Good The Bad and The Ugly.

When released in 1983, Roger Ebert gave the film 3.5 of 4 stars and said the film was “worthy of a franchise”.

Man’s man filmmaking icon, John Milius, of Red Dawn and Conan fame co-wrote the film. Guns, revenge, orchestrated mayhem and stoic bravery shine in the film. All written and shot as if done by Sergio Leone himself. There is also a midget, a fixture of many Terrence Hill spaghetti westerns.

Like the better spaghetti westerns, Lone Wolf McQuade is a tale of a reluctant, mysterious loner, a stoic warrior thrust into a world of violence and revenge. Also in great spaghetti westerns the hero can be savagely hurt by the villains, lose loved ones, and must crawl back from a veritable grave to gain his justified revenge. In this instance leading to a showdown with Mexican cartels, border wars, and ultimately David Fucking Kung Fu Carradine.

I won’t spoil the rest but if you aren’t a pansy you need to see this film or revisit it and if you are a pussy who longs to share in the joy of being part of the generation who played tackle football without pads then I implore you to watch, there’s hope for your generation yet.