“At The Table” is an ongoing column that details our contributor Freman’s first time playing the tabletop RPG Dungeons & Dragons.

In my last article on Dungeons & Dragons I discussed the Tabaxi, and why I decided on a Tabaxi Bard as a playable character. In this, I’ll discuss the creation of said character.

The Player’s Handbook contains a step-by-step process for the creation of a character, and there are various editable PDF Character Sheets available online. 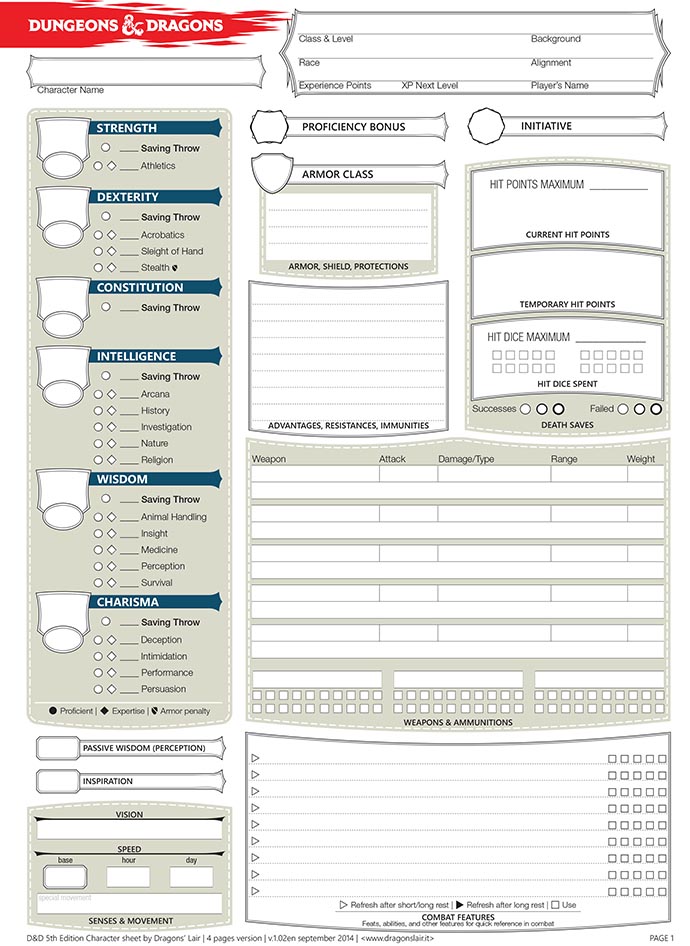 The first considerations in character creation are the name of your character, its race, class, and background. You can choose the sex of the character also, but that is part of the role-play, it makes no mechanical difference when playing.

I chose the name Bright Amber for my character, and he is a Tabaxi Bard.

The Player’s Handbook says that a Bard weaves magic through words and music to inspire allies, demoralize foes, manipulate minds, create illusions, and even heal wounds. They are a mixed caster and melee class, not as durable and powerful in combat as a Barbarian or Fighter, but not as fragile as a Sorcerer or Wizard either.

Skill proficiencies allow you to add your Proficiency Bonus, which varies based on level, starting at +2, to tests that use that skill.

A Tabaxi comes with skill proficiencies in Perception and Stealth, statistic bonuses of +2 to Dexterity and +1 to Charisma, and a handful of racial abilities: Darkvision, Feline Agility, and Cat’s Claws.

They speak two languages, Common and one of the player’s choice. From a game mechanics perspective, Goblinoid would be useful, as many enemies speak that language.

At level 1 the Bard comes with proficiencies in Light Armour, Simple Weapons, Hand Crossbows, Longswords, Rapiers, and Shortswords. They are proficient in three musical instruments of the player’s choice, I chose Lute, Flute, and Drum. In keeping with the flexibility of the Bard they also have three additional skills of the player’s choice. I chose Insight, Persuasion, and Sleight of Hand.

Backgrounds were a new invention for the 5th Edition of Dungeons & Dragons. They are intended to tie the character you create more fully into the world and story you’re building. They are customizable, and if one cannot be found that fits your vision for your character you can work with your DM to create one that suits.

Given the obsession that Tabaxi have with acquiring things, sometimes by less than legal methods, and also with some game mechanics concern for his role as a Jack of all Trades, I chose the Criminal (Burglar) background for Bright Amber.

In Dungeons & Dragons, your character has statistics of Strength, Dexterity, Constitution, Intelligence, Wisdom, and Charisma. These confer bonuses (or penalties) when engaging in combat or other exercises within the game.

There are a few ways of generating the values for your statistics.

A common method is to roll dice for them. Roll four six-sided dice, dropping the lowest value, six times, then allocate to your desired stats.

A third is to use a points-buy system, which is made simpler by online calculators.

Rolling dice offers you the greatest potential, you could roll 18 six times, but on the other hand you could roll 3 six times too. It goes without saying that you should only roll for your statistics in the presence of a witness.

Although going with points-buy I chose to roll dice just as an exercise. I rolled 15, 12, 13, 12, 11, and 14. These rolls would not have provided a higher peak than points-buy, but they fill out the bottom stats better. That is the price paid for the consistency of points-buy.

The Bard’s casting stat is Charisma, which means it is best to make that stat as high as possible. Given that Charisma is the stat also used for Persuasion, Deception, and most social interactions, the character gains a lot of utility from maximizing that stat. Dexterity is used for Stealth, Sleight of Hand, and melee attacks with a Finesse weapon like the Rapier while also contributing to the Armor Class, so is the next stat to focus on. The Tabaxi’s bonuses to Charisma and Dexterity makes it easier to reach higher values.

Strength is not an important stat in this build, but Intelligence and Wisdom are used for a lot of non-combat checks. Constitution determines the character’s starting Hit Points as well as their Hit Point growth as they level up.

The Bard has 5 Ability Score Increases (ASI) while leveling up, at 4th, 8th, 12th, 16th, and 19th levels. Each ASI allows the player to add 2 points to any individual stat, or 1 point to any two stats. The player, rather than taking an ASI, can choose to take a Feat instead, which is a skill that adds greater utility to the character. Since stat increases are so rare it’s best to make your vital statistics as high as possible when starting the game.

Tabaxi are not evil creatures, but they do favour freedom over all else. Bright Amber has the Chaotic Good alignment.

A character created with the Player’s Handbook rules comes with basic equipment from both its job class, and its background.

The Bard gives the player the options of:

Given that the Bright Amber is a high Dexterity build, I chose the Rapier. I also chose the the Entertainer’s Pack and a Lute.

As a casting class the Bard has spells to choose. At level 1 the Bard knows two cantrips, or level 0 spells, and four level 1 spells. They also have two spell slots to cast their level 1 spells with. Cantrips do not need a slot to cast.

Since Amber is intended to be fairly flexible, I decided to take Mage Hand and Vicious Mockery for his cantrips, and Healing Word, Cure Wounds, Dissonant Whispers, and Sleep for his level 1 spells.

Mage Hand creates a spectral hand that allows the character to interact with objects up to 30 feet away. Vicious Mockery inflicts damage and puts the enemy on disadvantage on attack rolls, which can help keep Amber from being hit.

Healing Word and Cure Wounds are healing spells, Healing Word healing less, but at range, while Cure Wounds requires contact. Sleep is a useful spell at low levels, capable of putting a group of enemies to sleep, although it does lose effectiveness at higher levels and will be traded for another spell at some point. Dissonant Whispers causes damage to an enemy and can force them to run away.

Like all magic classes the Bard gains spells and spell slots as it levels up. My intention is to take him into the College of Lore at level 3, which significantly increases the range of spells he has access to.

The feat Magic Initiate (Wizard) will be taken at level 4 in order to give him the level 1 Wizard spell, Find Familiar. That feat also allows the character to take two Wizard cantrips. One will be Booming Blade, a melee enhancing spell from the Sword Coast Adventurer’s Guide, and the other Mold Earth, a spell from the Elemental Evil Player’s Companion, that allows the character to manipulate the earth, for example raising defenses or digging traps.

Finally, a character needs a backstory, a recounting of where they came from and why they have the class that they do.

Bright Amber was born on the shores of the Bright Water, for so the Tabaxi call the great mountain lakes of their homeland of Maztica. It was believed that his white pelt marked him for future greatness, although he showed no sign of that growing up.

Precocious and curious, as all Tabaxi children are, he seemed to have an irresistible attraction to trouble. In his eighth year he first encountered human beings. Although the Tabaxi lived in relative peace with their sapient neighbours, some still tried to hunt them for their pelts, risking death for the great price such a prize would bring.

Such hunters espied Amber, and sought to take his unique white fur. It was that day that Amber first tasted human blood, for he was young, and fast, and strong, and the land itself cursed them. He slew them then and returned to his tribe with pride, honoured by his peers.

In his thirteenth summer a Tabaxi tinker, an elder named Smoke, took him and three of his packmates on a long journey to a far land of carved stone walls and tilled fields. There the Tabaxi wanderlust awoke in him and everything he witnessed entranced him. Smoke’s first gift to him was a lyre, and Amber found  magic in instrument and song.

When, at last, Smoke turned his wagon towards Maztica, Amber bade him farewell and chose to remain in the land of men. There he earned his bread and wine with his music, while traveling from town to town.

In the dingy bars he frequented he came into contact with those of the criminal underworld. Indifferent to the laws of men his agility was a great benefit in the art of burglary, although more than once he found himself fleeing town with the law in hot pursuit.

Now an adventurer, Amber seeks out treasure and lore to satiate his insatiable curiosity.

This is the process I followed creating the character of Bright Amber for Dungeons & Dragons.

The same process can be followed for any character. This is a game of character creation and development and most players have a folio of characters that they have played or intend to play at some point.

I’m sure Bright Amber won’t be my last.