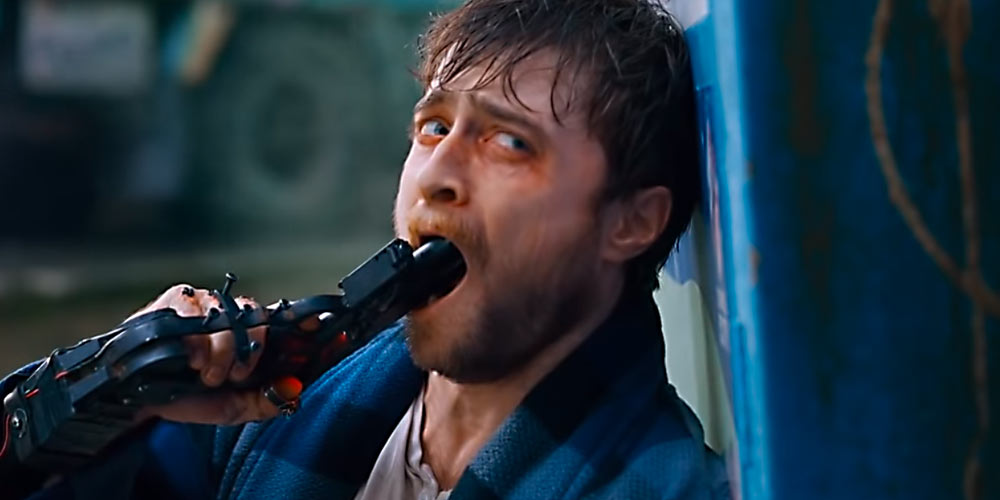 “Akimbo” Is Just One Of Those Annoying Words

Every garbage-chute tier ironic publication from The New Yorker to Vice was mandated to have “akimbo” appeared in at least one article each week.

Plus, it makes no sense here. Guns can’t akimbo. But again — irony.

Nerdy video game developer (Daniel Radcliffe) is a little too fond of stirring things up on the internet with his caustic, prodding, and antagonizing comments. One night, he makes the mistake of drunkenly dropping an inflammatory barb on a broadcast of Skizm, an illegal death-match fight club streamed live to the public. In response, Riktor (Ned Dennehy), the maniacal mastermind behind the channel, decides to force Miles’ hand (or hands, as it were) and have him join the “fun.” Miles wakes to find heavy pistols bolted into his bones, and learns Nix (Samara Weaving), the trigger-happy star of Skizm, is his first opponent.

Director Jason Lei Howden (Deathgasm) foretells of a future that may soon await us: drone-captured live feeds, UFC-like competitions pushed to an extreme, and online streaming platforms used for gladiatorial entertainment all around the world. As Miles navigates the underworld of Skizm, the stakes — and the ratings — have never been higher.

Did you also need a cigarette break to get through the whole thing?

But, I don’t know, it sounds pretty cool in a Death Match 2000 or Running Man sort of way. Maybe?

Have a look at the trailer:

Well, at least we know why they name-dropped Scott Pilgrim vs. the World.

Mistakes were absolutely made.

Guns Akimbo will allegedly appear in cinemas on March 5th, 2020.