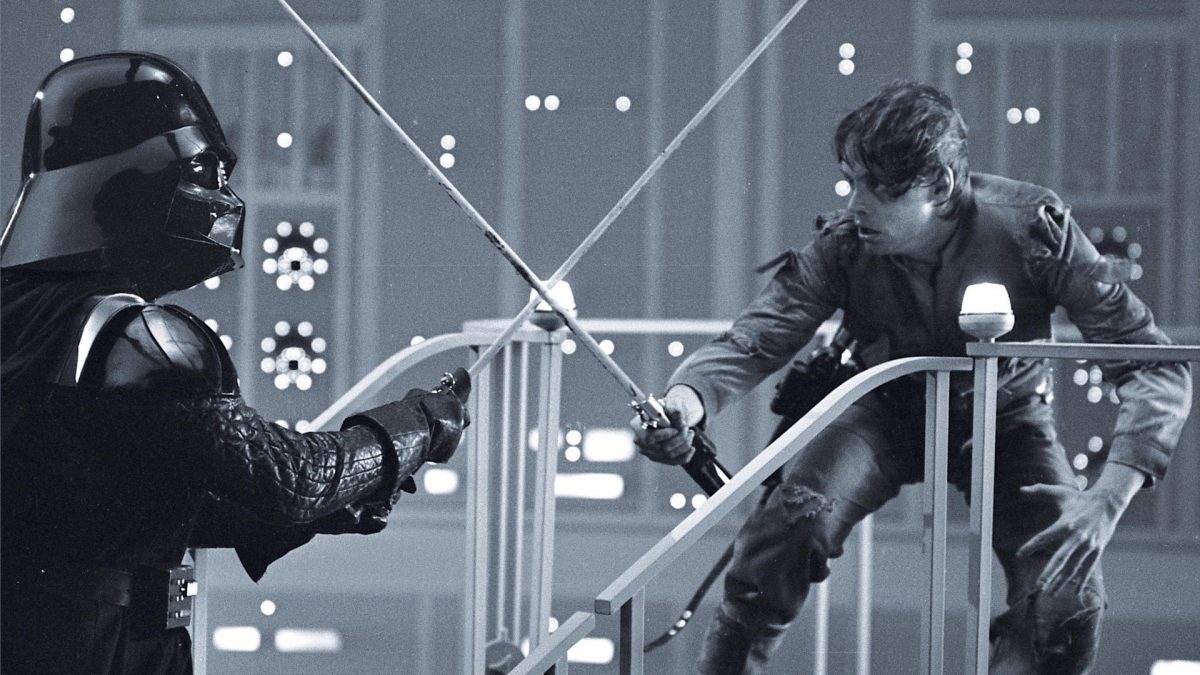 Welcome to Film Goblin’s Behind the Scenes column. We hope to cover the most interesting (and obscure) movies, music, people and events with some pics and factoids you probably already know, but if you don’t, even better! Feel free to recommend or contribute images or articles in the comments below.

Set Your Course For The Hoth System

When shooting for The Empire Strikes Back began on location in Finse, Norway, a fierce snowstorm hit the hotel where the cast and crew were staying. This would have normally halted filming, but director Irvin Kershner thought these weather conditions were an excellent opportunity to film the scene where Luke Skywalker wanders through the snow after escaping the Wampa cave. He did this by sending Mark Hamill outside into the cold, while he and the cameraman stayed and filmed inside the hotel’s front hall.

During the filming of the Battle of Hoth, the Echo Base troops were actually Norwegian mountain-rescue skiers. In exchange for participation in the film, Lucasfilm made a donation to the Norwegian Red Cross.

Stanley Kubrick nearly killed the movie. Empire was sharing studio space with The Shining, and there was a huge fire that burned down Stage 3 at Elstree Studios, destroying The Shining’s sets. That meant that Empire had to give up some of its own studio space, and The Shining went way over schedule, especially as Kubrick used the delay as an excuse to rethink his own movie. “Timewise, it is doubtful the picture will recover,” one crew-member wrote at the time.

The Force Is With You, Young Skywalker, But You Are Not A Jedi Yet

The shots where Luke uses his Jedi powers to retrieve his lightsaber from a distance were achieved by having Hamill throw the lightsaber away and then running the film in reverse. Hamill had to bang his head 16 times on the ceiling of Yoda’s hut before Irvin Kershner was satisfied with the take, and with the exception of being sucked out of a Cloud City window, Hamill did all of his own stunts.

Darth Vader’s reveal that he is Luke’s father was kept so secret that not even the man in Vader’s suit, Dave Prowse, knew.

The script said that Luke’s ‘No!’ was in response to Vader telling him that he killed his father, and only Lucas, Hamill, Kershner and James Earl Jones (voice of Vader) knew the secret, which was added in later.

Vader sarcastically inviting Han Solo to dinner is the only time in any of the Star Wars films that Vader speaks directly to Han.

Darth Vader was not always intended to be Luke’s father. Luke was going to meet up with his Force ghost father Anakin later, who would administer the oath of the Jedi with the help of Yoda and Obi-Wan Kenobi.

In the scene of Vader arriving on Hoth, Vader (Prowse) slipped on a cable and fell flat on his face.

The sound of Vader’s shuttle door opening is reportedly a recording of a whole block of Alcatraz cell doors slamming shut.

George Lucas was so impressed by Frank Oz’s performance as Yoda that he spent thousands of dollars on an advertising campaign to try and get him an Oscar nomination for Best Supporting Actor. Lucas’ campaign ultimately failed because it was felt that a puppeteer wasn’t an actor. Lucas felt this wasn’t fair to Oz, who actually didn’t mind.
Yoda’s iconic manner of speech has the parts of speech in Object Subject Verb order. Very few languages on Earth use this and most are based in the Amazon River basin.

The Dagobah set needed to be elevated to give Frank Oz and three other puppeteers room to control the Yoda puppet from below. For proper interaction, Mark Hamill was given an earpiece so he could hear Oz doing Yoda’s voice. On numerous occasions, Irvin Kershner would give a direction to Yoda by mistake and Oz would have to remind him who to talk to.

Carrie Fisher revealed that during the making of Empire she and Harrison Ford met up with Monty Python’s Eric Idle and The Rolling Stones for a night of hard partying, drinking a beverage called Tunisian Table Cleaner discovered by Idle during the filming of Life Of Brian.

Fisher says she and Ford went right from the party to shooting the arrival at Cloud City scene. She admitted the reason herself and Ford look so happy is that they were still feeling the effects from the night before.

The party atmosphere spilled into the shoot.

“Billy Dee Williams (Lando Calrissian) would say dirty things,” said Fisher. “I would say them right back. He said something unmentionable when he kissed my hand.”

The Empire Strikes Back was the highest grossing film of 1980 and in 2014, Empire Magazine voted it The Greatest Movie Of All Time.