Exploring the origins of locations in the Marvel Cinematic Universe (MCU) was a great suggestion from Goblin editor Wolves and I truly found it more interesting than I ever thought I would.

As this article builds on terminology and points established in the previous Nine Realms articles, please check those out first if you have the time:

Part One: GALACTUS & The Making Of MIDGARD

Part Two: The Best Laid Plans Of Ice And Men

Neighbor Of The Gods

Nestled in the uppermost branches of Yggdrasill, the Realm of Asgard is home to one of the two tribes of gods in Old Norse mythology: the Aesir (the other tribe being the Vanir of Vanaheim).

Asgard is not a normal planet in that it is a mostly-flat mass of land, suspended in space. Gravity is heavier there than on Earth, and as such it may be the natural force holding the land mass and waters of Asgard together.

It would seem that in the MCU, Asgardians are not necessarily gods but are so technologically advanced that their science seems to humans as magic.

Let’s take a closer look at some of the major players in Asgard.

The “Master of Ecstasy” is the translation of Odin’s name. Indeed, Odin poured himself wholeheartedly into everything he did, whether creating the world or gaining knowledge.

In battle, Odin valued berserk rage and those who fought harder than any other. Yet he also valued poetry. Truly, the only aspect lacking from his history seems to be overwhelming lust, such as that which drove Zeus to make #metoo seem like a Garry Marshall movie.

Hugin and Munin are extensions of Odin’s self. Their names translate roughly as “thought” (Hugin) and “desire” (Munin) and as such, they represent Odin’s intense desire for greater knowledge. He daily sent these ravens out into the Realms and daily they would report back, sitting on his shoulders and speaking into his ear.

The depiction as ravens is significant because, although clever, they are also carrion birds. This signifies Odin’s love of battle, and Norse warriors took the sighting of a raven to mean that Odin was pleased.

Such was the rich story that Stan Lee and Jack Kirby dug into when they introduced Thor and his history. 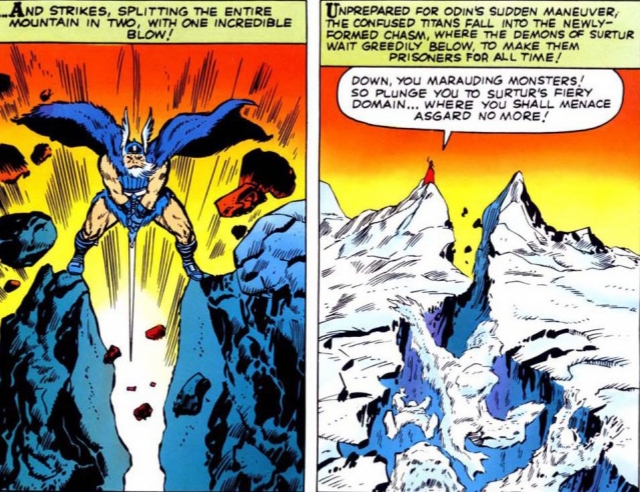 Valhalla And The Valkyries

A host of female figures, often associated with ravens, the Valkyries and Odin choose, among those in battle, who may live and who shall die. Among those slain, the Valkyries bear half to the hall of Valhalla, after the other half have been selected by Freya and borne to her hall. More on that shortly.

Here is Valkyrie, aka Brunnhilde, as she appears in the Earth-616 reality:

And here is the diversity-for-money version of Valkyrie in the Earth-199999 reality (Thor: Ragnarok):

The Valkyries have been an inspiration for many varying works of art. Composed in the early 1850s and first performed in 1870, Richard Wagner’s Die Walküre is the second of four operas in a series, with the famous “Ride” being the beginning of an act within the opera.

Here is perhaps the most famous use of Wagner’s piece Ride of the Valkyries, in Francis Ford Coppola’s Apocalypse Now:

In Odin’s hall of Valhalla, the honored dead that have been borne to him by the Valkyries enjoy spending their days adventuring, battling, eating fine dinners, and downing endless supplies of mead. Each evening, all their wounds are healed in anticipation of the morrow’s exploits.

Yet these warriors aren’t in Valhalla for a life of comfort. They are expected to join Odin and fight for him during Ragnarok, which is the end of the entire cosmos and means “fate of the gods” in Old Norse.

At debate among scholars is whether or not the goddesses Frigga and Freya are one and the same. Evidence strongly suggests that they could be and the similarities are many.

In any case, the close relationship of the two mythological figures gave me a reason to post this incredible piece of music from Texas-born band The Sword:

Her Marvel comics identity and her MCU identity take an opposite track, however, for in the comics she is but step-mother to Thor, while in the MCU she is his biological mother.

In the reality of Earth-616, her marriage to Odin was the reconciliation of the Aesir and Vanir, as the two tribes of gods had previously been at war. Now, upon her union, unification was achieved, however grudgingly, and the Vanir agreed to bear the title of Asgardians.

Freyja as she appears in Earth-616:

And here is Rene Russo as Frigga in the Earth-199999 reality (Thor: The Dark World):

Choosing Warriors Among The Dead

As the song above intones, Freya rides into various battles, choosing half of all slain warriors and appointing them to her hall of the dead, called Fólkvangr.

As mentioned above, after Freya has selected her half of the dead, the Valkyries bear the other half to Valhalla. This sharing or parting of slain warriors was part of the peace treaty made between the Aesir and the Vanir. As was the custom among Norse and other Germanic people, tribute was paid between warring parties by the exchange of hostages, who would live in peace with the opposition.

As stated above, Freyja is not Thor’s mother in the Earth-616 reality. That honor belongs to Gaea, one of the Elder gods.

I feel that enough can be learned about Thor’s origins by watching the three Thor movies in the MCU, and I don’t want to rehash it here. Likewise, his Old Norse mythology is much of the same as you find in the movies. He’s the god of thunder!

I’d like to take this time to briefly look into Thor’s battle with a foe known at the time only as Him.

A nameless being, intended to be the next step in human evolution, the being soon to be known as Him was created by a group of scientists called the Enclave, in their remote lab called the Beehive.

Upon his “birth” Him promptly escaped, injuring the scientists and wrecking the Beehive. After some adventuring among the stars, Him encounters Thor and Sif. Him explains his story to the Asgardians and, feeling lonely, decides to take Sif as a concubine. He teleports away with her, easily fending off Thor.

The battle rages into the next issue, as Thor intensely attacks Him, eventually causing Him to retreat back into a protective cocoon to heal, abandoning his plan to slip the stiff to Sif.

Here now is a post-credits scene from Guardians of the Galaxy Vol. 2, in which Ayesha of the Sovereign race is nearly ready to unleash her creation, called Adam, from his pod:

As you may have already guessed or already know, Adam is Him in Earth-199999, and may soon be known as Adam Warlock. Some surmised that Adam would be the one to defeat Thanos, but that can’t happen now with Guardians 3 on hold for the time being.

Heven And The War Of Angels

The enmity between the Aesir and the Vanir was due in part to the Vanir and other Asgardians mistreating the inhabitants of Midgard (humans) and Odin sought to quell this behavior.

He enlisted the help of the Angels, from the Realm of Heven, to protect Midgard. Extremely materialistic, the Angels accepted Odin’s payment but were also conspiring against him, to form an alliance of Asgard’s enemies and accepting payment from them as well.

Svartalfheim, Vanaheim, Niffleheim, Hela, and Surtur were among those who joined the alliance, and when war was declared, the Queen of Angels brought Odin a price at which he could prevent it.

Odin refused the blackmail payment while also balking at paying their now-broken agreement. War began. There were heroes on both sides.

During a battle, the Queen of Heven sneaked into Asgard and took hostage Odin’s infant daughter Aldrif.

Odin refused to yield. The Queen stabbed Aldrif, then retreated.

In his hatred, Odin summoned all his power and cut the Tenth Realm of Heven from Yggdrasill. I take this to mean that Odin slammed shut the portal to Heven, preventing any travel into or out of the Realm, because in my research I learned that after a time, Thor discovered and reopened that portal.

If you’ll recall way back to the first part of this series, when I was introducing Yggdrasill, I mentioned Ten Worlds. Now you know why and what happened that left only nine.

There, Not Back Again

There you have it, friends. The Nine or Ten Realms. We began this quest looking at maps, both of Yggdrasill and Asgard, though as you’ve seen it morphed into much more, and as we’ve discussed, mapping the Realms is nigh impossible.

In any case, I hope you’ve enjoyed reading this as much as I’ve enjoyed learning about it and writing it. Hell yes, Marvel. Keep on building!