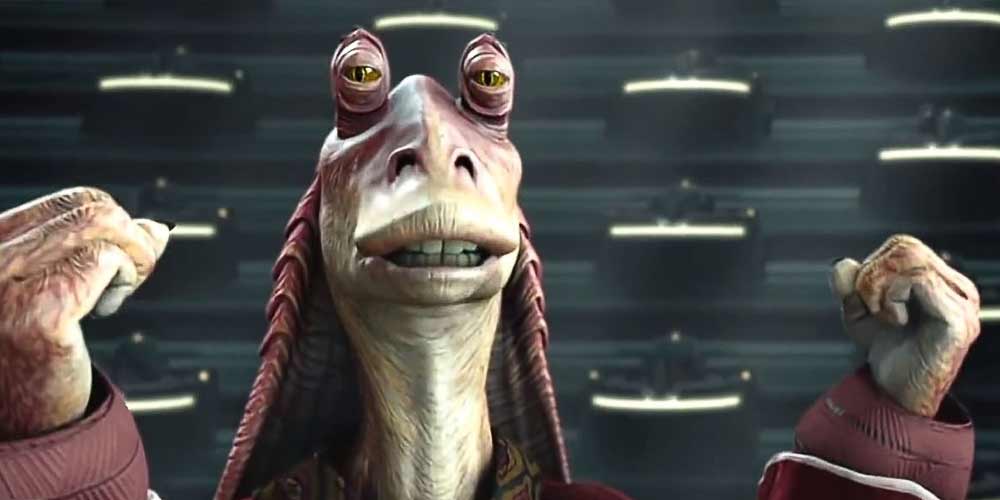 It Was Only A Matter Of Time

Of course, this news about Mr. Best was picked up by the shill media to bolster the idea that a segment of the fans was “toxic” and targeted actors because they not only hated the characters they portrayed, they also hated the actors for their gender and skin color.

Oddly, Mr. Best never mentioned any harassment toward him personally from fans and merely referenced a general “backlash” against Jar Jar Binks, which I believe we can all agree occurred. That character was fucking hated. This Is All Assumed To Be Fake

Without evidence, we assume all accusations to be false. Especially ones that involved multi-billion dollar corporations.  Keep this in mind while considering The Kelly Marie Tran Instahoax:

It was a public relations campaign designed to discredit critics of Disney Star Wars movies — that’s it.

But, as with any good astroturf campaign, the dislike for Jar Jar’s character was seamlessly folded into the false narrative of “targeted harassment” of Disney Star Wars actors at the hands of racist and sexist fans.

Even though the entire episode was a manufactured crisis meant to distract from the box office failure of Solo: A Star Wars Story that occurring at the time, it received a tremendous amount of digital ink culminating with a tone-deaf racial grievance screed by Kelly Marie Tran herself in The New York Times.

Even the least keen of readers will notice that none of Ms. Tran’s accusations of racism and discrimination have anything to do with either online harassment or her role in any movie. The only mentions of such are in the description of the article that was added by editors at The New York Times.

If you are interested in the full scope of this hoax, the entire con job is covered in great detail over at the fantastic website Disney Star Wars Is Dumb.

In return for being a useful tool that Disney could use to crybully fans into not having contrary opinions about their Star Wars products, Mr. Best has been given his reward.

This is quite a step-up for an actor who’s IMDb credits show an almost equal split between roles that exploit and mock Jar Jar and one-time appearances in obscure and quickly canceled TV shows.

Landing something this big is clearly his payoff for playing the game.

If anyone cares about the game itself, Lucasfilm’s senior director of Online Content & Programming, Mickey Capoferri give some details:

“This is definitely a kids game show like no other. The various challenges will test a Padawan’s connection to the Force in three locations — a forest planet, onboard a Jedi star cruiser, and inside a Jedi Temple — immersing them and the audience in a fun, humorous, and exciting competition.”