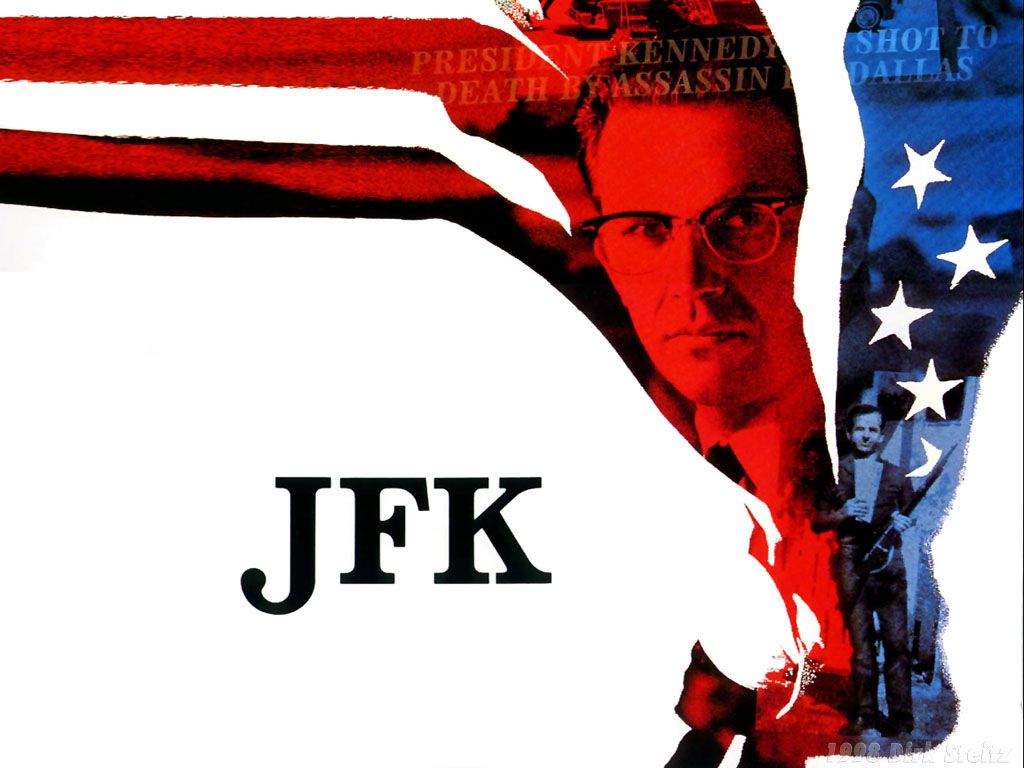 That Oliver Stone, eh? To some, he’s a film-making genius exposing the dark underbelly of The American Dream. To others he’s a crazy burnout with a tinfoil hat. The reality probably lies somewhere in-between, and 1991’s JFK is probably the best representation of both facets of the man.

Three films in his canon have drawn more attention than any others. The truly great Platoon, his devastating portrayal of the disintegration of human conscience during the Vietnam War, deservedly bagged him a couple of Oscars. Wall Street remains the greatest validation of Michael Douglas’s ability to command a screen.

And then there is JFK, which is a difficult movie to review. As pure entertainment it’s pretty much flawless, rattling along from revelation to revelation and constructed with an artist’s attention to detail. It’s possibly the greatest procedural and legal thriller ever made.

But JFK was never intended as pure entertainment and Stone said as much. He was on a mission to tell people “the truth” about the Kennedy assassination, and the movie seems to contain so much solid and incontrovertible evidence of a vast conspiracy that you find yourself wondering if you were involved.

And there is JFK’s Achilles’ heel: once you begin to dig a little deeper into the background, you realize exactly how much of this film is built on some very wet sand.

Kevin Costner puts in a career-best performance as New Orleans District Attorney Jim Garrison, who immediately following the Kennedy assassination pulls in a suspect named David Ferrie (Joe Pesci at his hyperactive best), supposedly because he was an associate of Lee Harvey Oswald’s (a terrific Gary Oldman).

Although Ferrie is clearly hiding something, Garrison has no choice but to release him and gets on with his life until a chance conversation with a U.S. senator three years later.

The senator (Walter Matthau) states that there is no way any man could have killed Kennedy with three shots in the time it took, and that the official Warren Commission report into Kennedy’s death was a blatant cover-up.

Garrison re-opens the case and accumulates evidence that suggests, variously, that Oswald was a covert CIA operative and that the CIA were running guns into Cuba with the help of David Ferrie, a local businessman named “Clay Bertrand” and a militant anti-Castro group. 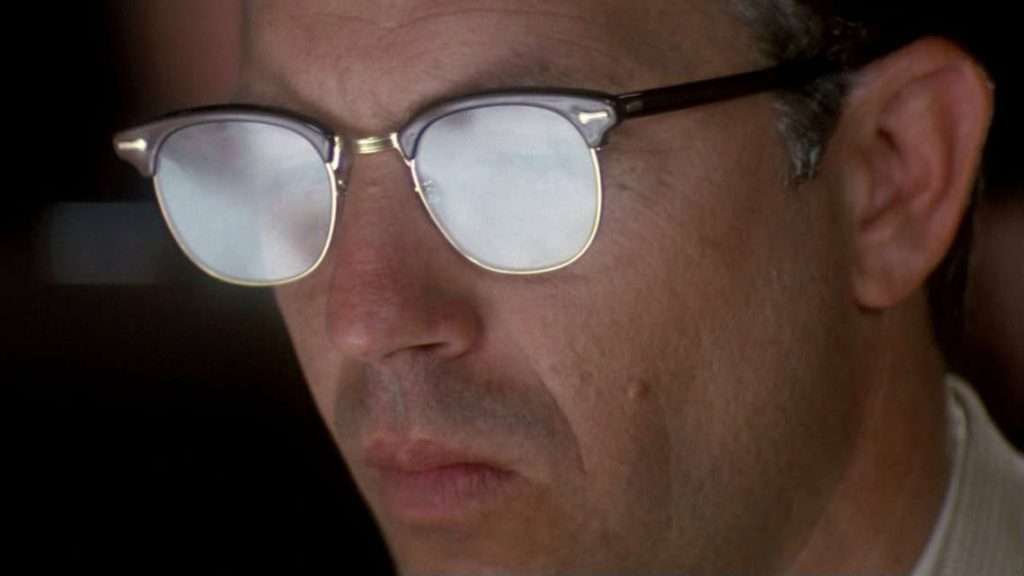 He concludes that the assassination was actually ordered by military elements in the U.S. government, furious at Kennedy’s apparent intention to withdraw from Vietnam, who used this anti-Castro group for their own ends.

Garrison finds his office bugged, witnesses murdered, his family threatened and his reputation destroyed as he doggedly persists in hunting for the truth, until the trail leads him to businessman Clay Shaw (a truly brilliant Tommy Lee Jones), who is the alleged “Clay Bertrand”.

Though he has no evidence to speak of except word of mouth, he brings the first prosecution in the history of the assassination against Shaw and attempts to expose the conspiracy. 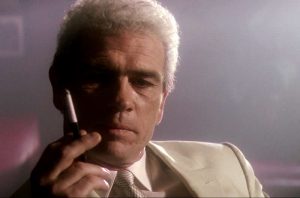 Why Is JFK A Great Movie?

Stone coaxes flawless performances out of every actor, from John Candy’s seedy jive-talkin’ lawyer to the priceless moment when a frustrated Joe Pesci bangs a payphone mouthpiece mid-conversation. Almost everyone is gifted some trademark “Nawlins” peppery dialogue to chew, laced with southern-fried profanity and turns of phrase:

“This is Louisiana, Chief! How the hell do you know who your daddy is? Cause’ yo’ momma told you so!”

It could also be one of the most thrillingly-edited movies ever made. It cuts-and-pastes archive newsreels with reconstructed flashbacks and footage of the Zapruder film with a devastating cumulative effect, reaching its zenith during the heart-stopping courtroom scene as Garrison hammers home his case using Zapruder’s chilling video.

John Williams delivers one of his finest scores of the 90s, a heady mixture of American nostalgia and sinister military force.

JFK is, quite simply, brilliantly assembled and masterfully filmed, and for a film nudging the three-hour mark, it seems to shoot past in half that time thanks to its slick construction. The script is tight, the dialogue snappy and quotable, the music perfect and the acting of the very highest caliber. As entertainment, it is hard to fault at all.

If only it could be judged upon these merits alone.

Why Is JFK Full Of Shit?

So here’s the thing. Stone’s movie can’t be judged solely on the above, nor was it ever intended to be. The fact is, there are numerous elements within this story that are either pure fantasy or willfully distorted. This didn’t go unnoticed when it was released. Stone suffered serious damage to his credibility over many of the claims he made in this film, and deserved to.

There are countless books, documentaries and websites devoted to the Kennedy assassination if you have the time or inclination to do some digging. To detail them all here would require a few dozen pages, but it’s worth briefly mentioning the main bones of contention, as the movie’s flesh hangs on them.

The catalyst for Garrison’s investigation was that Oswald, apparently a poor shot with a rifle, couldn’t possibly have got off three shots in the space of approximately eight seconds; ergo, a second gunman.

But it had already been proven by the time the film came out that not only could this have been possible, but the time frame was significantly longer than the eight seconds in the movie, and Oswald was in fact an excellent shot with a rifle according to his military records. So much for that theory, Oliver. 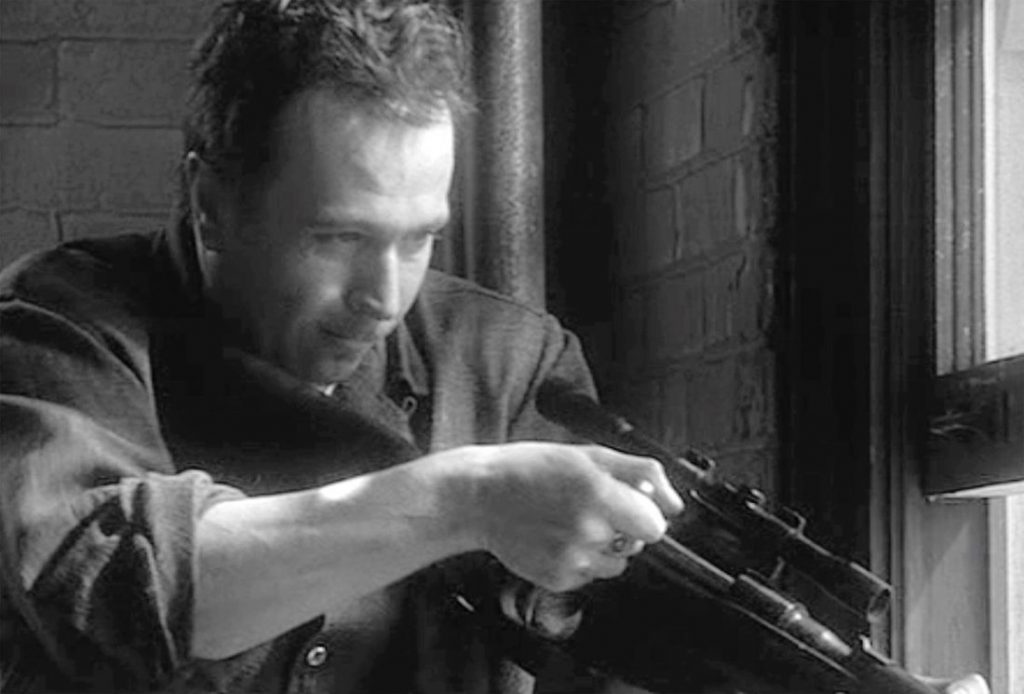 Then we have David Ferrie and Clay Shaw, believed by Garrison to have plotted the assassination with an anti-Castro cabal. There exists no evidence for this other than Garrison’s hunch. There was no evidence to suggest Shaw ever even met Ferrie or Oswald, yet in the movie they are all sitting around in a smoky room talking about “triangulation of crossfire” and so on.

Garrison himself was held by many to be a deeply flawed and misguided man, his prosecution more of a witch-hunt than a crusade for justice.

The courtroom scene in which we hear the famous “magic-bullet” theory seems to represent rock-solid evidence of a conspiracy. The problem is that the seven wounds inflicted on Kennedy and Governor Connally were in all likelihood caused by one bullet, when you look at the angles at which they were sitting and other factors. 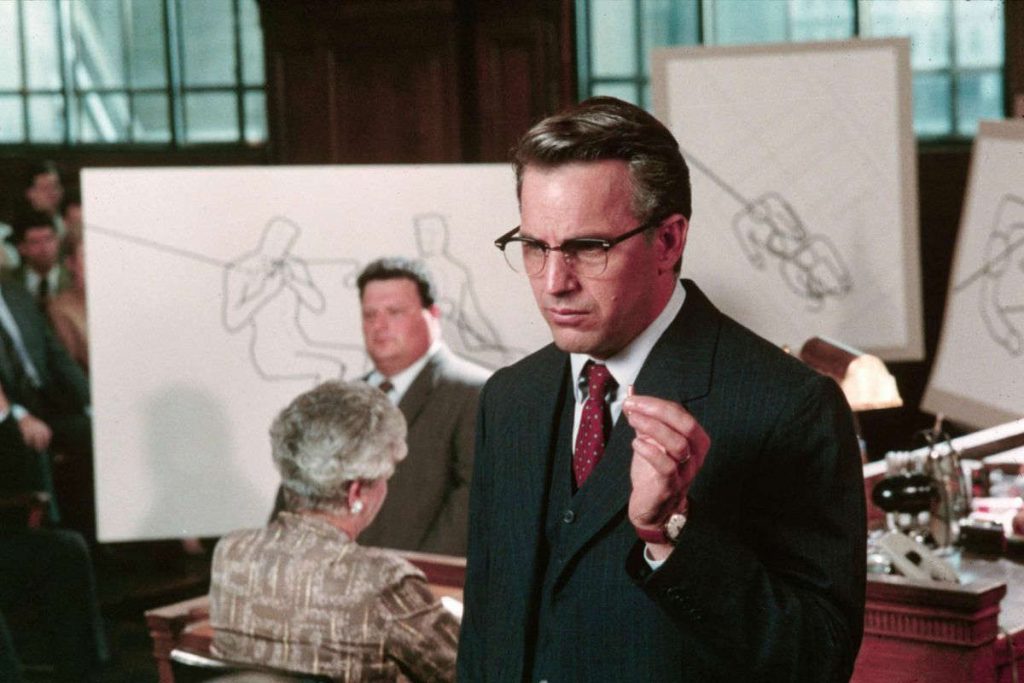 Stone even disproves his own theory in the movie: During the Zapruder film footage, Garrison states that Connally shows no sign of being hit, when in fact he clearly reacts on-screen to a bullet strike.

The famous “back and to the left” scene is a stunning movie moment, scored and edited to perfection. The problem is that it’s meant to be conclusive evidence that Kennedy was hit by a second gunman, but is actually perfectly consistent with a shot from the rear when you research some human physiology.

Stone And The Gays

Problematic one this, Oliver.

For Stone, gay means sick, at least on this evidence. Shaw and Ferrie are here having a sadomasochistic gay relationship, for which there is — guess what? — no evidence.

So naturally, they feature in some tastefully depraved and deviant gay-sex scenes, because…that’s what bad gays do, I guess. On the plus side, Kevin Bacon does get some choice lines as a jailbird rent boy.

The key scene in JFK is the appearance of “Mr. X”, a former military black ops expert played by Donald Sutherland. He sagely explains to an astonished Garrison how security arrangements in Dallas were tampered with (unproven), how the telephone system went out in Washington for an hour after the assassination to keep the wrong stories from spreading (it didn’t), and how various shady military & business types organised the murder in order to protect their money-spinning Vietnam war.

Maybe that notion might have flown, except for the fact that “Mr. X” never existed and was instead based entirely on a man named L. Fletcher Prouty, a renowned conspiracy-theorist with whom Stone was clearly mightily impressed.

Among other things, Prouty claimed two alien bodies were kept in storage by the military, the Jonestown tragedy was in fact mass murder carried out by U.S. intelligence and Franklin Roosevelt died from being poisoned by Winston Churchill. He also had some unfortunate links with anti-Semitic organisations and had a book published by a company which denied the Holocaust happened. 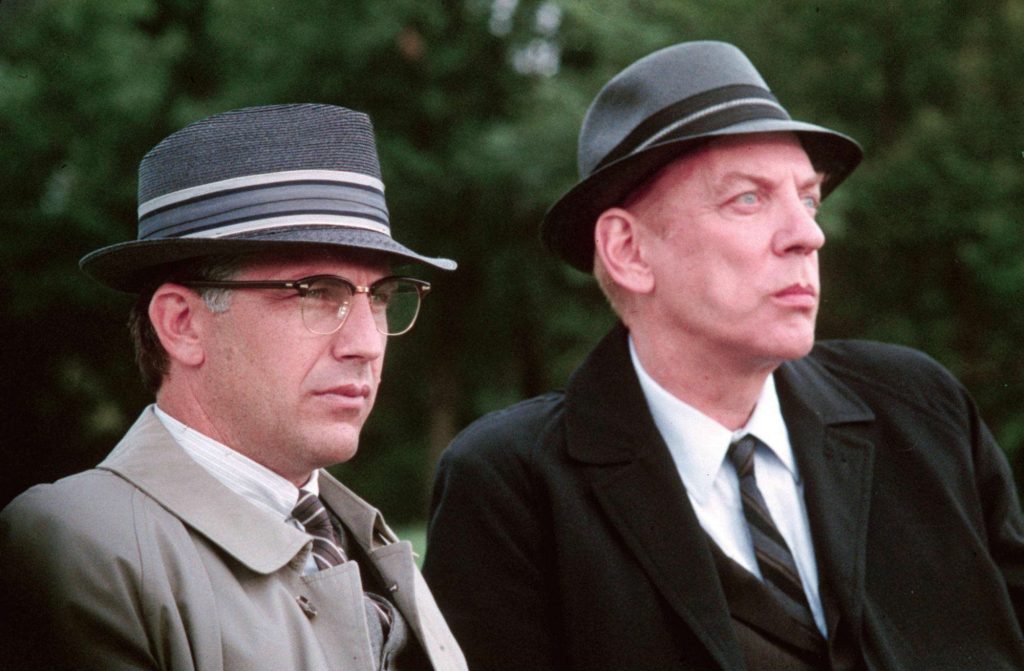 All of which slightly undermined Stone’s credibility in blowing open this supposed conspiracy. By relying on questionable evidence and simply making up a few facts as he went along, Stone managed to convince an awful lot of people who went to see the movie. Until, of course, a few more reasonable voices pointed out his errors; the ones detailed here are a snapshot, the film is riddled with many more.

Trust no one who claims to be telling “the truth” with a movie.

And a movie like JFK merely provides fuel for the fire for those who believe that all conspiracy theories are bullshit, and to be fair, most are.

But some hold any amount of water when backed up with sound evidence and reasoning, and these are two qualities lacking from Stone’s movie.

In recent years Stone has shuffled his feet over JFK, at one point claiming that he was offering not the truth, but a “counter-fiction”. Or “alternative facts”, if you will.

JFK is a thrilling, chilling, fantastic movie. It also plays fast-and-loose with history and evidence and, for all its outstanding cinematic qualities, isn’t the place that anyone should look for a serious examination of the assassination.

Or, as Michael Rooker says at one point, unwittingly providing the movie’s epitaph:

“How the hell do you keep a conspiracy going between the CIA, the FBI, the Mob and who the hell knows who else when you can’t keep a secret in this room between twelve people?”

“Thank you Dallas and GOODNIGHT!!” 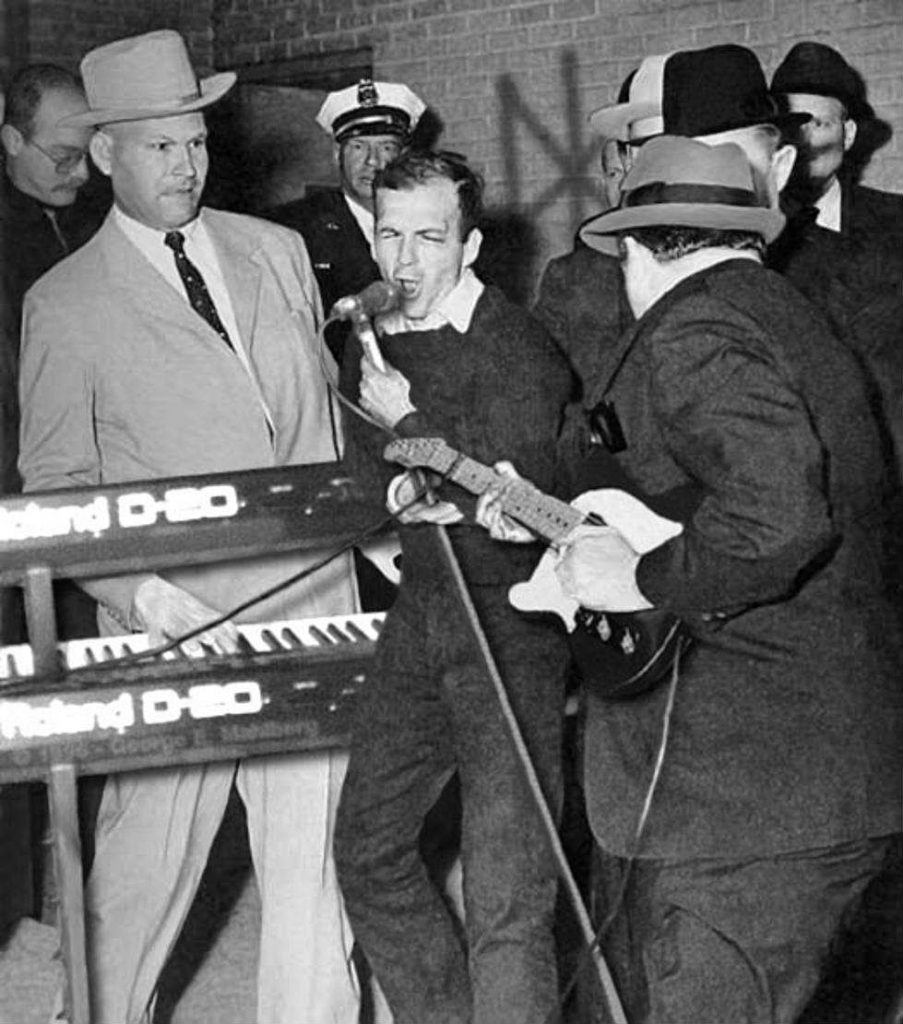