Sylvester Stallone famously wrote the first draft of the script in three days, it went through nine sizable rewrites before it was purchased. 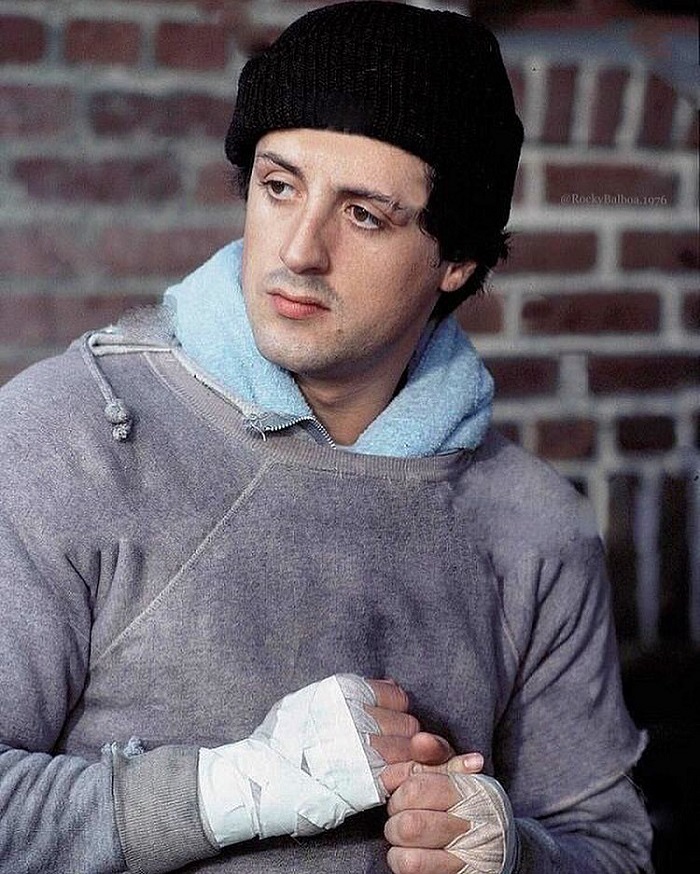 Producers Irwin Winkler and Robert Chartoff became interested in the script and offered Stallone an unprecedented $350,000 for the rights, but he refused to sell unless they agreed to allow him to star in the movie, despite the fact that he had only $106 in the bank, no car and was trying to sell his dog because he couldn’t afford to feed it. 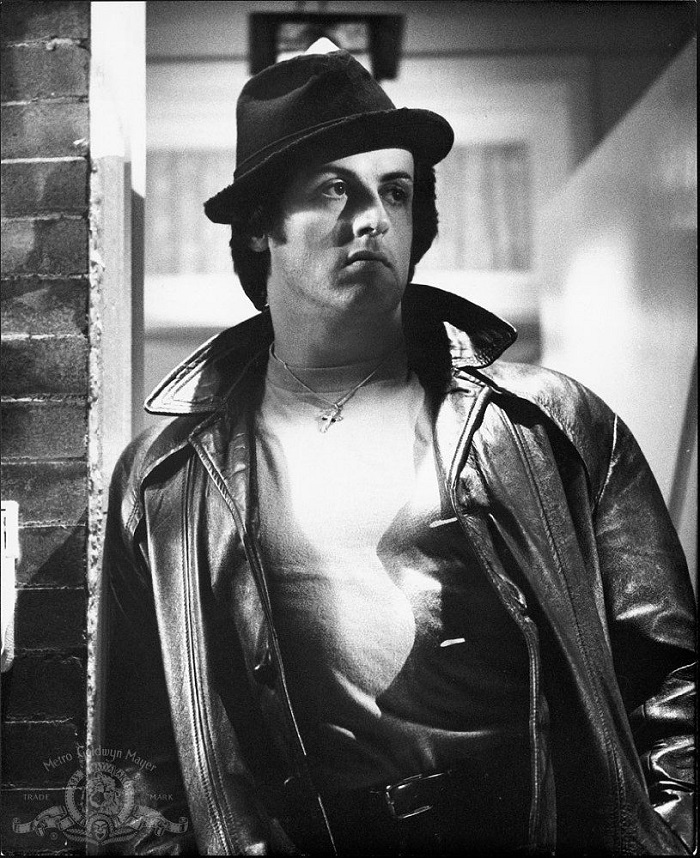 When the budget was lowered to $1 million, the studio was no longer allowed to keep Stallone from starring. He was paid $20,000 for the script and a SAG minimum of $350 per week for acting instead.

Rocky was made on a budget just over $1 million and was a sleeper hit, earning $225 million in global box office receipts, becoming the highest-grossing movie of 1976.

In his original version, Adrian was Jewish, Mickey was racist, the Paulie character was Adrian’s Jewish mother, Apollo Creed was Jamaican, and the script ended with Rocky throwing the fight and opening a pet store for Adrian with the money he made.

The studio was interested in having James Caan, Burt Reynolds, or Ryan O’Neal play Rocky.

Adrian was almost played by Susan Sarandon. Stallone and the producers decided that she was “too sexy.” Cher was also considered. Bette Midler was offered the role but turned it down. Carrie Snodgress had, in fact, won the part, until her agent asked for too much money. Talia Shire auditioned at the last minute to save the day.

Burgess Meredith got the part of Mickey because the other actors they considered for the role were insulted that Stallone wanted them to read for it. 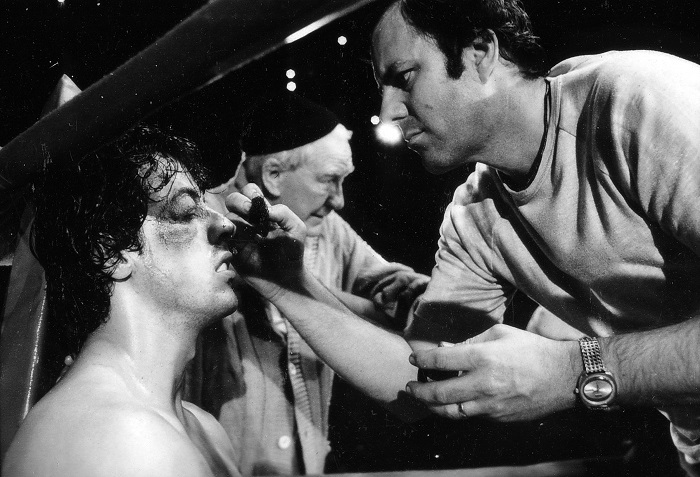 The single most expensive cost on Rocky was the make-up.

No artificial lighting was used for exterior shots, and actors had no trailers or catering. Only one on-set meal was served for breakfast, lunch, and dinner: pizza!

The two scenes where Rocky runs up the museum stairs, the first where he can’t do it and the second during the “Gonna Fly Now” training sequence where he runs up them triumphantly, were filmed two and a half hours apart. The first before the sun rose, the second afterward. 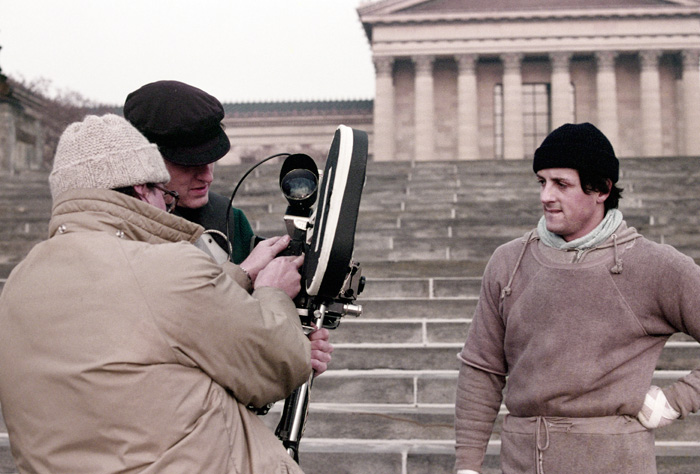 When shooting his famous jog through the streets of Philadelphia, Stallone pulled a tendon in his leg and was taken to a nearby hospital in a wheelbarrow. 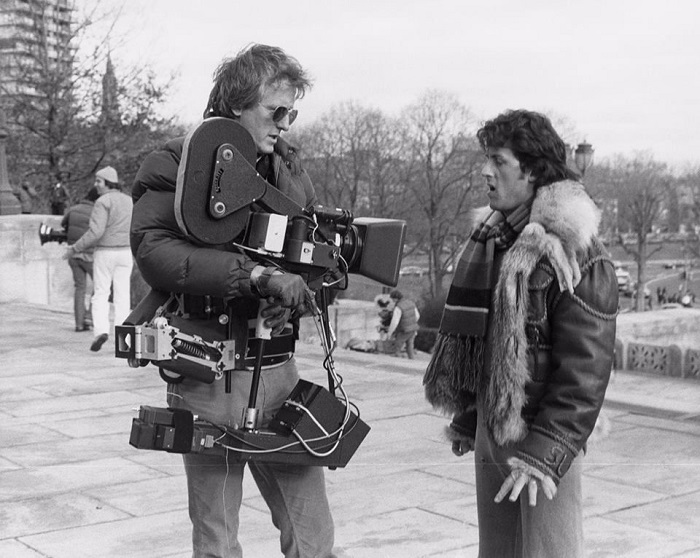 Most of the scenes of Rocky jogging through Philadelphia were shot guerrilla-style, with no permits, no equipment, and no extras. 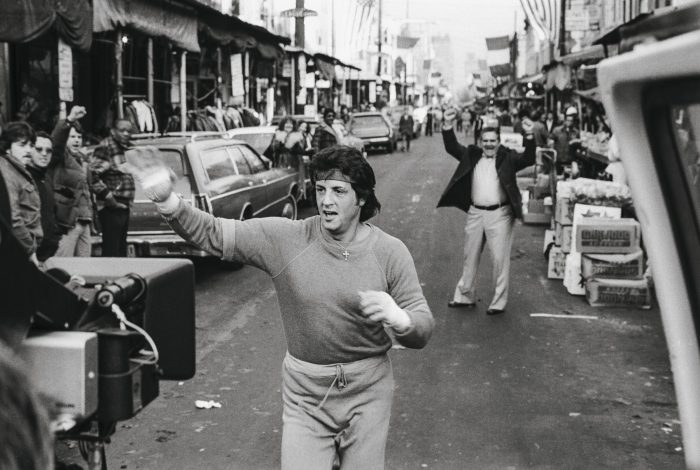 The entire movie was shot in 28 days.

When he agreed to make the movie, Director John G. Avildsen had never watched a professional boxing match, nor had he ever seen a boxing movie. Avildsen and cinematographer James Crabe both make cameos during Rocky’s TV interview in the meat-house. Avildsen is the cameraman, whereas Crabe is the lighting man.

Avildsen excited about the success of the film, reduced his usual salary from $250,000 to about $50,000 and a percentage of the profits.

The monologue which Rocky delivers after turning down Mickey’s offer to manage him was completely improvised on-set by Stallone. He has since explained that he was heavily influenced by the fact that the bathroom of the tiny apartment in which they were shooting really did stink.

The photos on Rocky’s mirror are actual photos of Stallone as a young boy.

Rocky and Adrian visited the skating rink after it was closed for budgetary reasons. Originally, Adrian and Rocky have a date during the skating rink’s operating hours. Because it would’ve cost money to pay for extras to skate around them, Avildsen asked Stallone to change the scene so that the couple had the rink all to themselves. 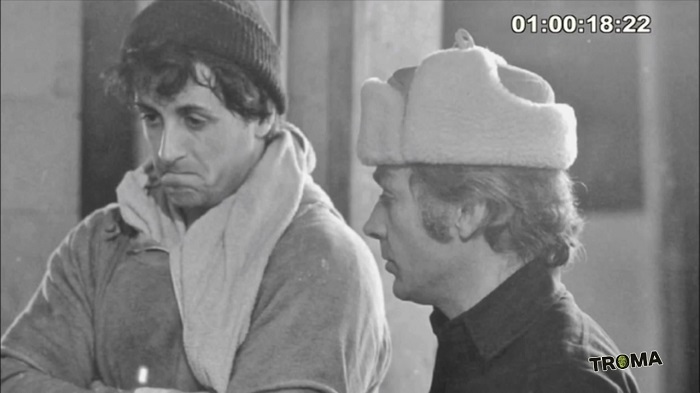 Stallone insisted that the scene where he admits his fears and doubts to Adrian the night before the fight be filmed, even though production was running far behind and the producers wanted to skip it. Stallone had only one take for the scene, despite the fact that he considered it to be the most important scene in the movie. 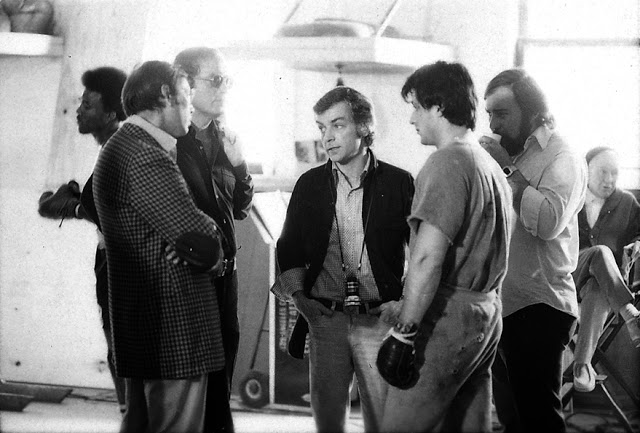 Stallone and Carl Weathers rehearsed their big fight for four weeks. Avildsen shot their rehearsals on Super 8 so that the actors could see what they were doing.

When it came time for the actual shooting of the Creed/Balboa fight at the Los Angeles Sports Arena, producers advertised that anyone who showed up to participate as audience members would receive a free chicken dinner. 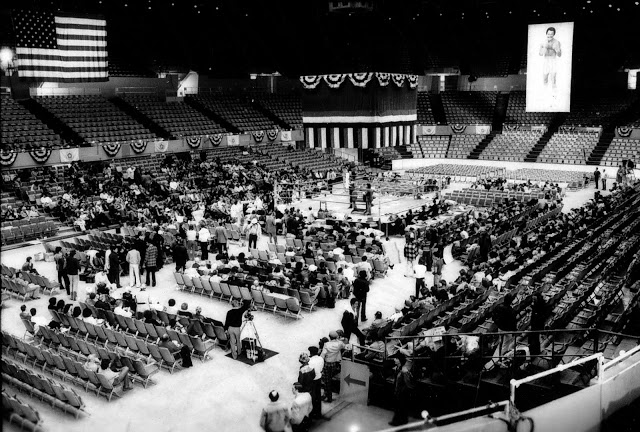 Two things that were cut were a scene where Rocky visits his gym with Apollo Creed as a photo op and Rocky beats up Dipper, the fighter who took his locker earlier in the story, and a scene the night of the big fight in the locker room between Rocky and Adrian.

The locker room scene was at least filmed because production stills from it exist. No footage of these cutscenes exist.

“Ain’t Gonna Be No Rematch”

Filming on Rocky became a bit of a Stallone family affair. Sly’s brother, Frank Stallone Jr., played a street corner singer in Rocky, while Frank Sr. was the timekeeper for the fight. 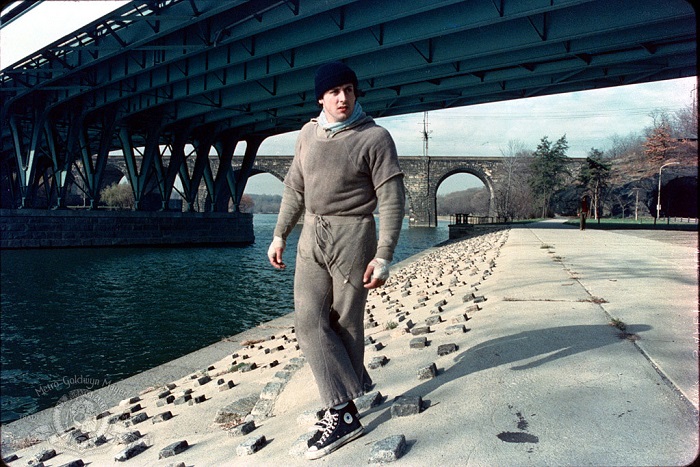 Stallone was initially inspired by watching Muhammad Ali fight a major underdog fighter named Chuck Wepner in 1975, who lost but managed to knock Ali down once in the match and became a local New Jersey hero. 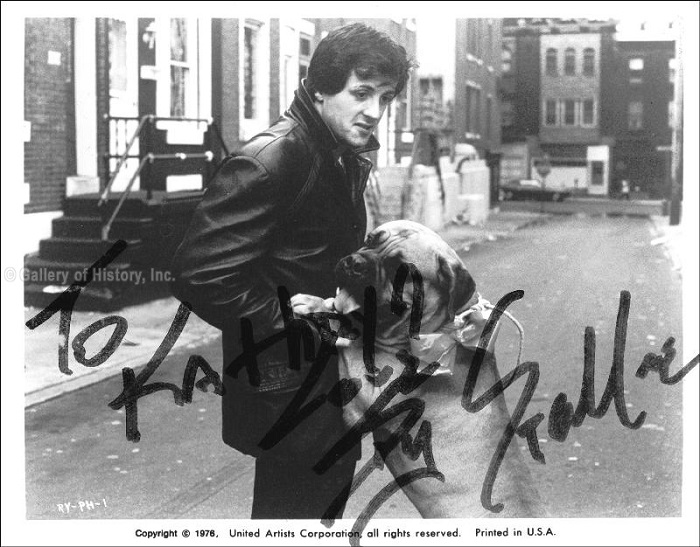 Rocky’s turtles Cuff and Link outlived a couple of the characters. The female red-eared sliders that appeared in 2006’s Rocky Balboa are the same turtles from the original 1976 picture. 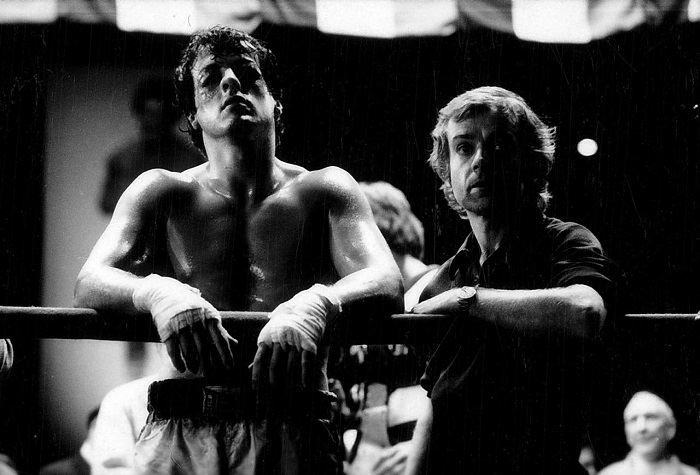 Rocky isn’t the character’s actual name. His real name is Robert Balboa, this was seen in a rough script from the second movie. He took the nickname from the real-life boxer Rocky Marciano.

The original, tattered grey sweatshirt worn by Stallone during his famous run up the steps of the Philadelphia Museum of Art is still in existence. The old relic is currently in Sly’s personal collection. He has promised it to the American History/Pop Culture section of the Smithsonian but has yet to submit it to the museum. 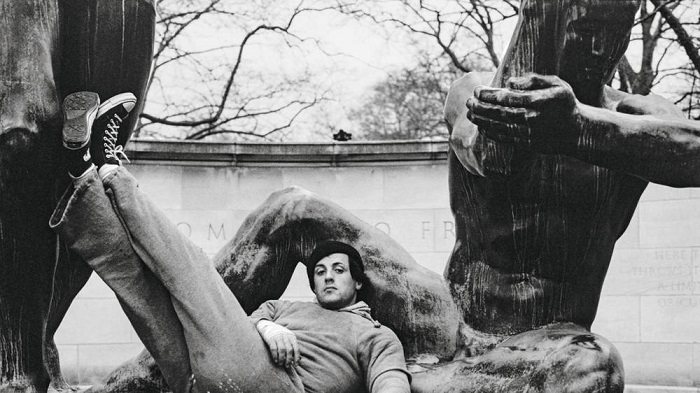 The movie went on to win 3 Oscars, including being the first sports movie to win the Academy Award for Best Picture. Rocky received many positive reviews and turned Stallone into a major star. Sly also received an Oscar nomination for writing the film. 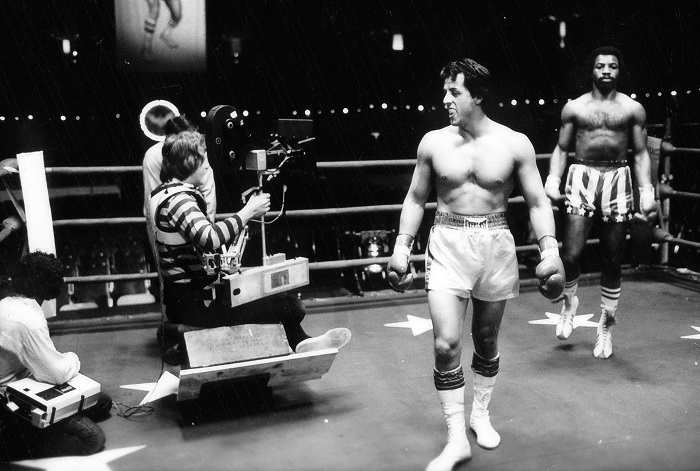 In 2006, the movie was selected for preservation in the United States National Film Registry by the Library of Congress as being, “culturally, historically or aesthetically significant.” 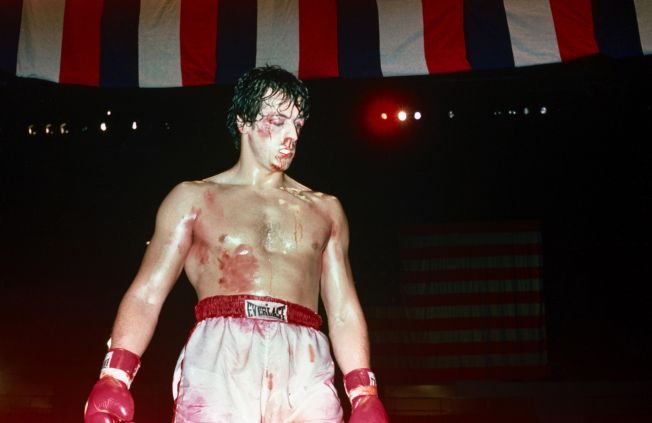 Rocky is considered to be one of the greatest sports films ever made and was ranked as the second-best in the genre, after Raging Bull, by the American Film Institute in 2008. 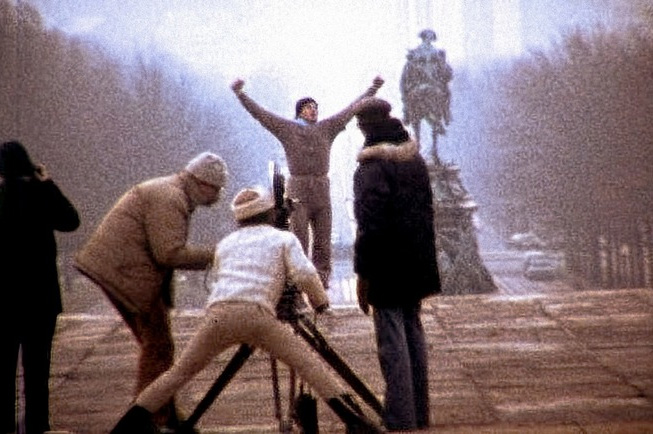