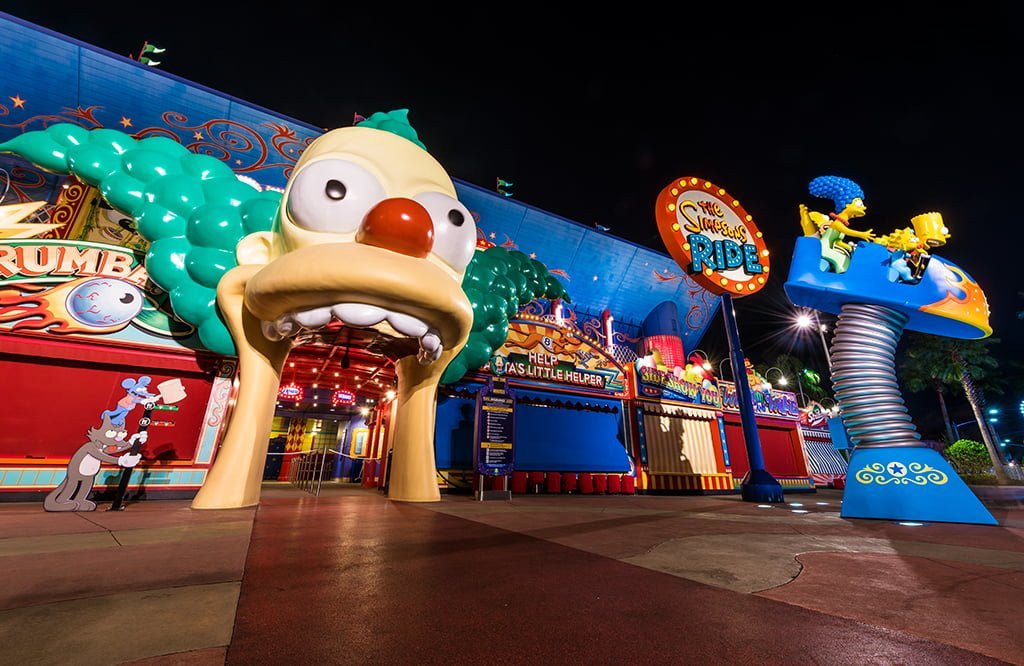 Yes, I’m on vacation but that doesn’t mean I can’t toss up an article and let you in on a bit of movie-related entertainment! Videos will start again later in a couple of weeks but this week I took my daughter and my mother to Universal Studios in Orlando, Florida.

For those of you who haven’t been, know that there are really two parks.

Yes, that’s right, if you really want the full experience, you may want to go to both parks so they can get the most out of your cash. The original park was built in 1990 and I went there in 1995. I was unaware of the second park and was too lazy to do the correct amount of research, so make sure you do.

The second park is called The Islands of Adventure. It was built in 1999 and I don’t have as much to say about it as I didn’t go to that one. In this park,  they create entire sections dedicated to a particular movie or franchise.

We only got the tickets to the older park whose areas are a bit more generic with rides and only subsections dedicated to a particular franchise.

For instance, there’s Toon Village with a big Simpsons section but there is also other stuff in that area, too.

In the newer park, there would be an entire Harry Potter section with numerous rides and attractions all based on that theme. So if you really want the entire experience, I would recommend the dual park ticket. There are easy ways to get from one to the other.

That being said, you will definitely need two days to get through them both.

Unless you only want to only do Harry Potter, it will take you all day to just get through one park. We went through the original park and it was plenty satisfying but again, it really depends on what you’re looking for. Mileage may vary.

Speaking of mileage, I walked over 8 miles in that park. Hope you’re healthy, it gets hot in July. I would recommend May or October. These months are generally the lightest in terms of weather and crowds. July wasn’t too bad for crowds but it ain’t cool.

The lines averaged about 30-45 minutes however the Harry Potter ride told us 50 minutes but something happened halfway through and it was nearly 2 hours from entry to exit. One thing you may consider is the Express Pass which lets you go through a shorter queue. It’s pricier but if time is a consideration, I would spring for it.

Let’s start in on the best parts: the rides! So how were they?

Many of the rides are variations on the same technology. 3D glasses are part of nearly every ride and the merging of 3D projections with the moving coaster/car is pretty darn seamless.

Many times I believed what was happening to me, even though it was impossible.

That being said, some rides were clearly retro-fitted from older rides. For instance, The Fast and The Furious: Supercharged was made from the old Earthquake! ride.

Now I understand the necessity for this. Who the heck remembers that movie? The ride was recreated from the California park as it was an old standby and probably was more popular than the movie it was created from.

But time marches on and if you’re not a Star Wars or MCU property, it’s going to be hard to keep up interest. The Fast and the Furious makes sense and it’s not a bad ride but still feels like a hand-me-down.

On the other hand, the Harry Potter ride was phenomenal. The ride takes place in the Gringotts Bank which makes a lot of sense if you recall the roller coaster type cars they had in the movie. You get attacked by the Guardians Of The Vaults and then Voldemort and Bellatrix themselves come out to get you to give up “Har-REE POT-ter!” as Fiennes likes to pronounce it. It appears to take place during the moment in Deathly Hallows Part Two when they free the dragon. Or was that part 1? Who knows…

Anyhow, the blending of sets and screens is excellent. The cars tilt and lurch and you never know which direction you’re really going. The seamlessness is only marred at one point when the projection wall clearly has a door that opens. You can see the edges quite clearly. They try to mask it with steam and it’s supposed to look like the dragon opened up a hole in the mountain. Otherwise, it’s damn near perfect.

The Simpsons ride was the old Back To The Future ride retrofitted.

It’s really funny and the 3D is spectacular. As with most of the rides, not only do they have the 3D screen combined with the tilting car, they like to spray you with a bit of water or blow heat on you during explosions. It’s probably the most frantic ride as a ride based on a cartoon should be.

Men In Black had an interesting ride, it was the only one that didn’t have a 3D glasses, at least of the ones we went to. The cars are equipped with laser guns and you can get points for all the aliens you shoot along the way.

I’m embarrassed to say my daughter smoked me.

The Transformers ride is basically the same set up as Harry Potter but suffers from Michael Bay issues. Loud, chaotic and not nearly as enjoyable. Still, better than any of the actual movies, being very short.

The Mummy is one that’s long in the tooth, with videos of Brendan Fraser still looking young and not yet traumatized by Hollywood. But it was still very good. Lots of coasters into dark tunnels, real fire effects and the 3D did a great job with sand mummy face.

At one point it appears the ride is over until the poor lady thanking you for riding gets killed by mummies. Off you go again!

The Tonight Show ride is a kind of virtual simulator ride where you follow Jimmy Fallon on a race through New York. Like his show, it’s not funny, it’s not good and only worth it because there’s no one in line.

Finally rounding off all we went on is the first one we did: Shrek 4D. While it was ok, the movie did not do well with the 3D effect. Much like an old 1990s projector it probably was.

It was mostly a typical theater with occasional swooshes by your feet, some projections on the wall, and occasional mist in your face. The moving seats were definitely showing their age. This did not leave a very good first impression but fortunately things got better after that.

So the vast majority of the park was fine. A backlot style area with a lot of shops, some arcades, and food. Food is very expensive so stop off at a McDonald’s for breakfast or something. We wandered around until we go to Diagon Alley and this is where they pulled out all the stops.

First off, it isn’t easy to find. Not to say it’s terribly difficult but like in Sorcerer’s Stone, they don’t mark it well with signs or anything. Of course, you have a park map and a few clues of the London buildings they used so it’s not like you’ll waste a lot of time finding it or anything. But I appreciated the entrance being somewhat tucked away and looking just like the brick wall in the first Harry Potter. You walk in and my daughter’s face said it all.

It was Diagon Alley!

I like the movies but Harry Potter to my daughter is like my Star Wars — original trilogy, of course. Clearly, they did it right and from my recollection, I would have a hard time telling the difference. The area is enormous. The stores are full of overpriced stuff but they kept the illusion everywhere.

The dragon on top of Gringotts is enormous and breathes fire regularly, making you jump the first time. My daughter wants a wand. $55. It is prop-level accurate and they really do a good job of giving you a variety to choose from and tailoring it to your personality. The ones my mother and I liked were pretty close matches to the personality types listed for them. Sure it’s vague enough but still, it’s all in good fun.

The wand, however, isn’t just a nice souvenir. You can find little golden markers on the ground all over the area. Stand on them, wave the wand and things will magically happen. Maybe an umbrella statue will start raining. Maybe lights coming on in a window. Maybe a broken suit of armor fixes itself.

Really, I can’t say enough about the immersive nature of the Harry Potter area. If you want more though, you have to go to Harry Potter World in the Islands of Adventure. I would say we spent the majority of our time there and there was a lot do.

Kudos to them on that alone.

We stopped in for food and for just my daughter and me it was $45!

We had butterbeers and regular meals, but still! Theme park food, always with that extra bit of rape. Still, it was good food. Also, get the frozen butterbeers. They are much better than the regular drink.

The lines are not too bad and they usually have videos or animatronics there to entertain yourself. In some of the rides, there is a pre-ride to the actual ride. In Harry Potter there is an area where you can see a desk, bookcases and such. Then they project holograms of the actors that look like they are there in the office! It’s a well-done effect. Fast and Furious also had a similar effect.

Then they put you in an “elevator” which is just a floor bouncing up and down with some projections up top to make it look like your going down. Finally, there’s more stairs and lines before you finally are able to ride into Gringotts.

If you really want to be immersed in a world, the Harry Potter section is great. My guess is the Islands of Adventure are all like that so if you are really into any of those franchises, I would get the two-day pass. If it’s Harry Potter, it’s probably a must.

The lines could be better but generally are tolerable. Going on a Monday was probably a good move. The rides are a mixed bag. Food is good but expensive. Diagon Alley was worth the whole thing, at least for my daughter.

I look forward to trying out Star Wars Galaxy’s Edge next year. I’ve not heard great things and if they don’t put in the level of detail that Universal did for Harry Potter…

I’ll have a bad feeling about that.