This article started out as “The Top 10 Dragon Magazine Covers With Monsters That Are Not Dragons”.

It kind of became just “Weird Monsters Of Dragon“.

Maybe some of these aren’t so unique and strange.  But a lot are.

Since the 1970s, counting the “Best Of” issues, there are around 109 Dragon covers with some kind monster on the cover that is not a dragon.

From those, I picked 21 to move into the finals before I chose the ten I’ve prepared for you here. What I’m saying is… it was a lot of work. 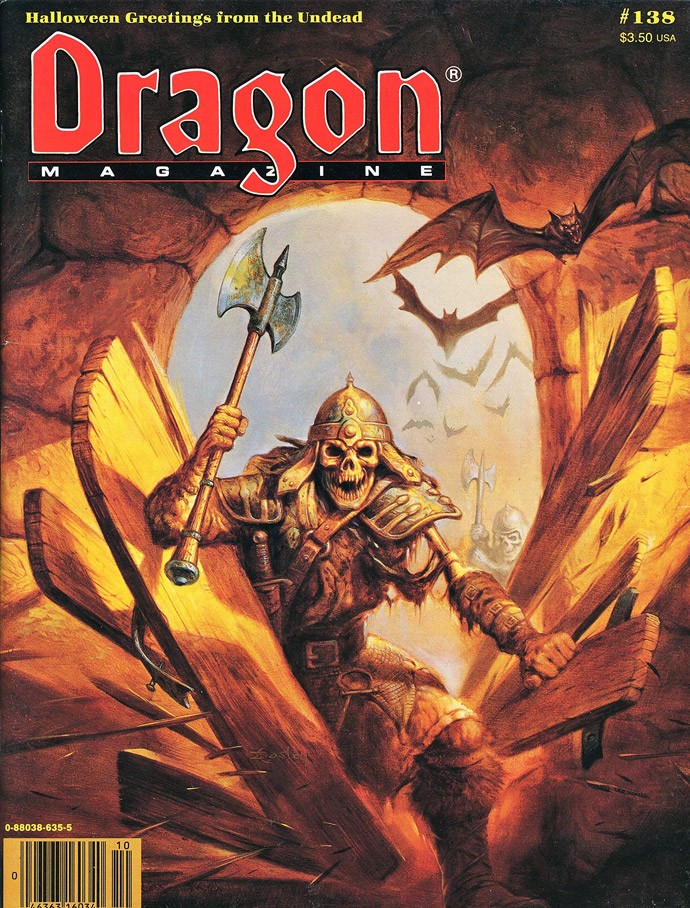 When I asked some of the Goblins with help IDing this creature, they said all “skeleton”.

Which was weird. I mean, does that look like some SJW NPC undead to you?

NO! There is malevolence in that skull!

So, I went looking for some other official explanation and found the skeletal warrior from 1st Edition Fiend Folio. 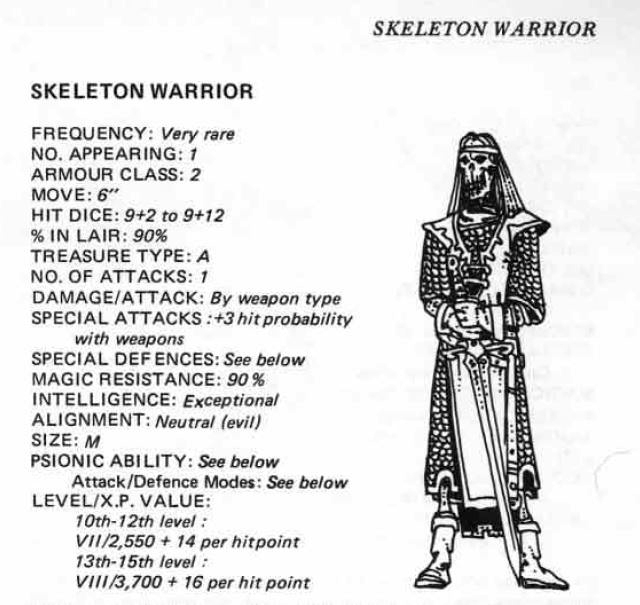 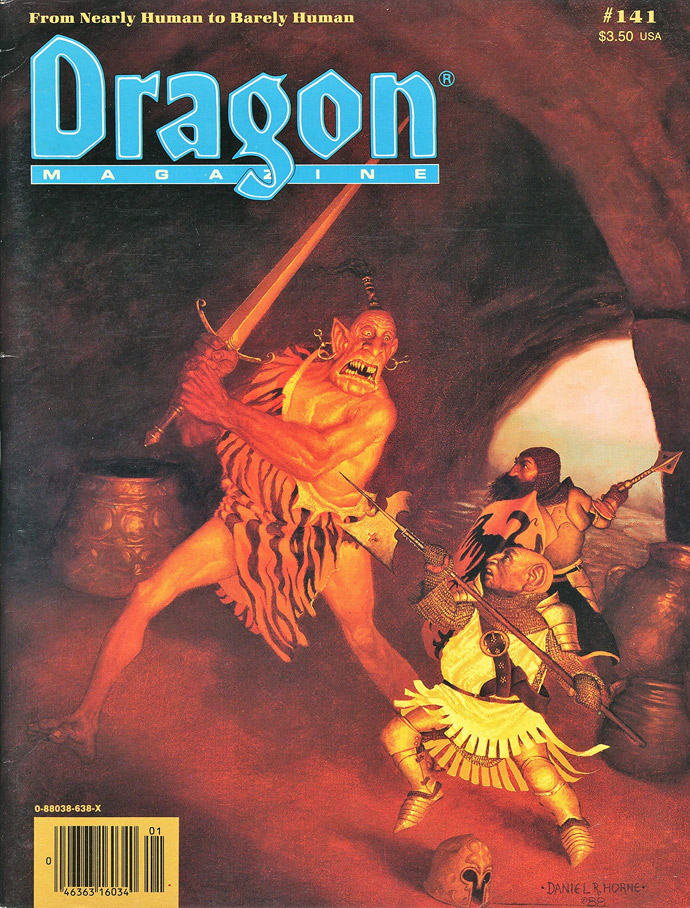 Daniel Horne puts a couple of gnome guards into a sticky situation with a qullan. That’s right, a qullan.

The qullan are a race of seemingly insane humanoids that wears warpaint in a wild variety of clashing colors and sports their battle scars proudly. They wield swords which have been sharpened to an incredible sharpness. 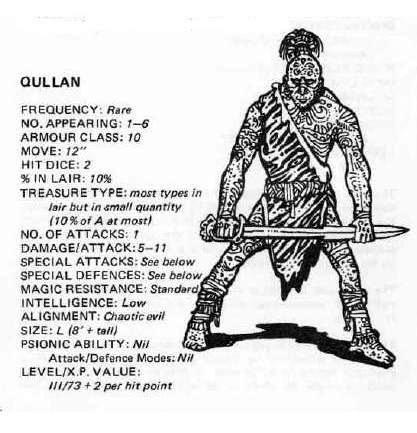 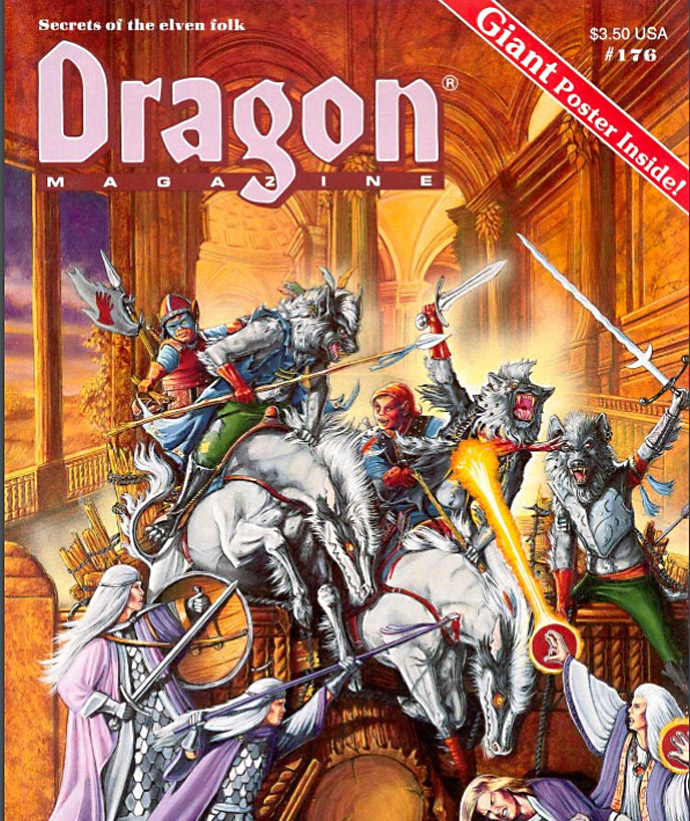 Gnolls, goblins, and leucrotta hurl themselves across the last barricade in an elven
mansion, as the defenders wield spells and steel against them. The final moments of a
doomed elven house are recorded this painting by Lissanne Lake.

Not a great work of art but a very evocative concept; we rarely see elves lose in D&D and we almost never see them losing to a cannon fodder race like the gnolls. 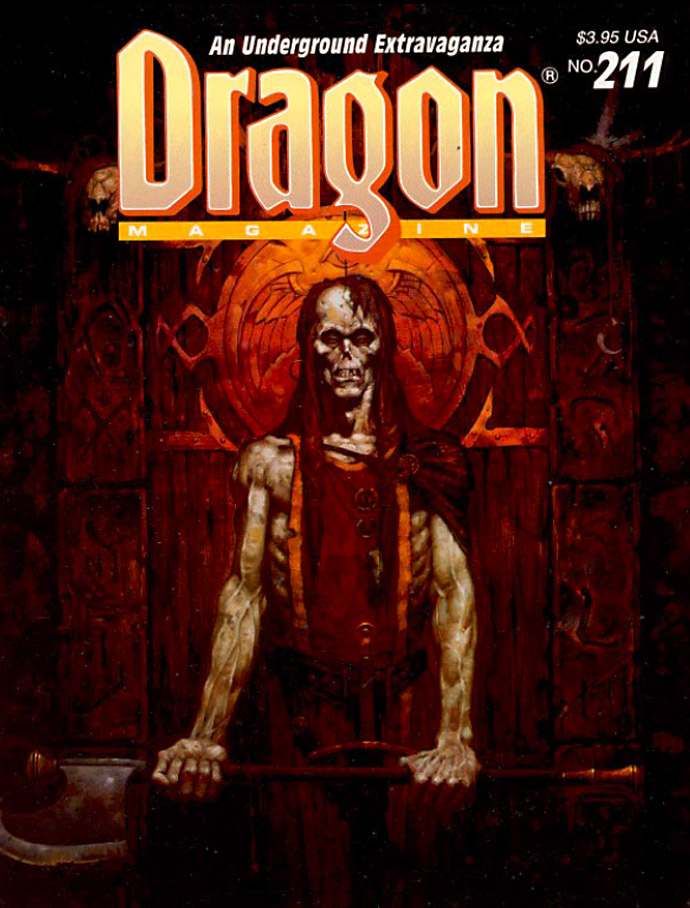 This looks like a draug, an undead creature from Norse mythology that is also known as aptrganga or aptrgangr, literally “again-walker”.

Mr. Brom has many other strange and terrible paintings for sale on his website. 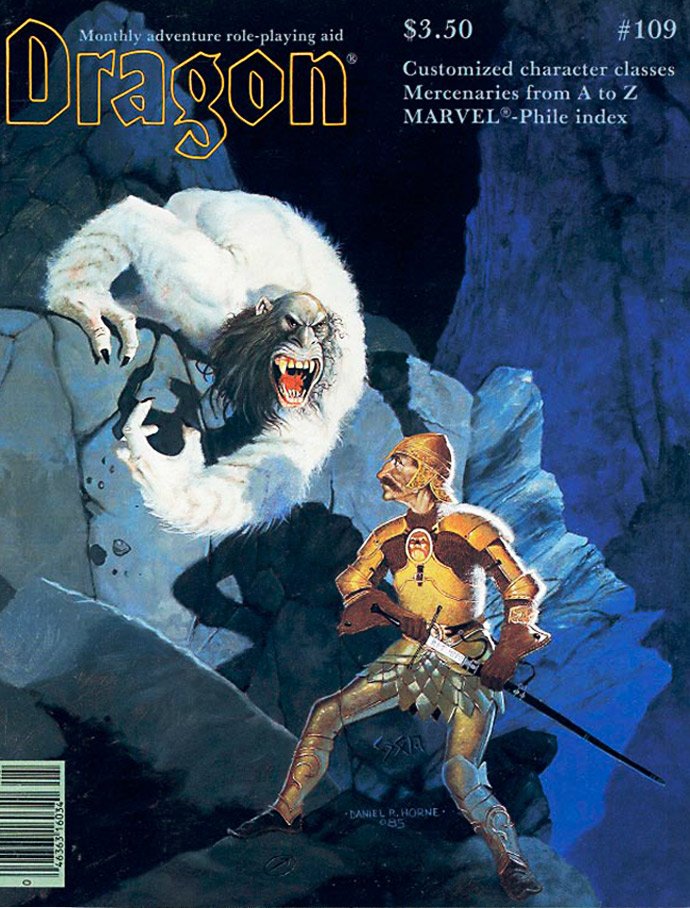 “Attack of The Taer” on this hapless cavalier was Horne’s first cover for Dragon magazine.

A taer is a solitary primate-like creature resembles a muscular gorilla that lives in cold mountain caves far away from civilization and despises all company.

Basically a yeti, the taer first appeared in the original Monster Manual II (1983). 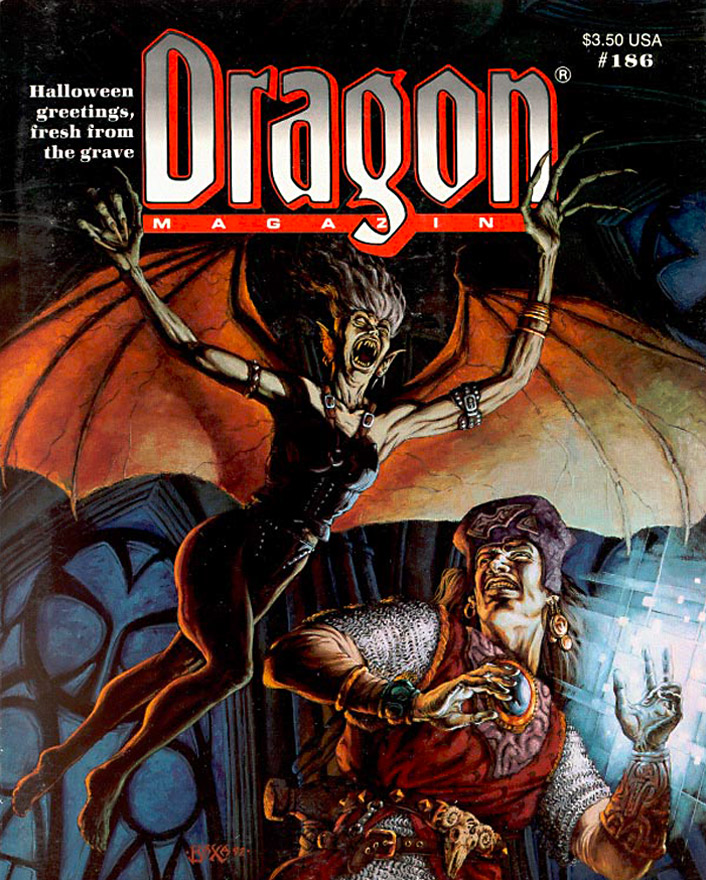 According to the official Dragon description that is a vampire dropping in on our cleric friend. But not really a vampire that I’ve ever heard of. I looked up all of the Dungeons & Dragons variants and the closest I could get is the Bruxsa, a Portuguese vampire, or the Irish Dearg-due.

Maybe it’s some kind of alternative vampire form and I just missed it. Let me know! 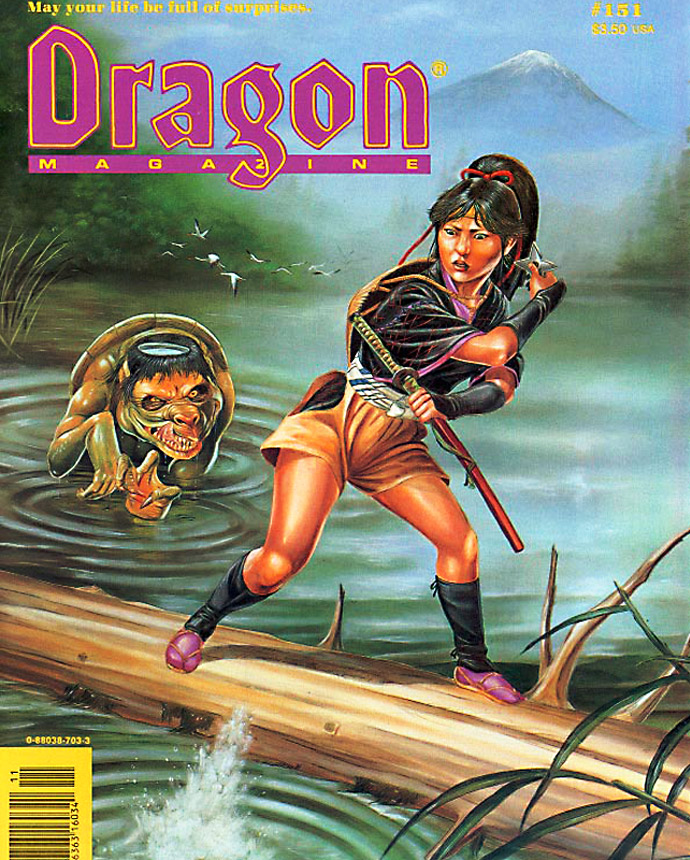 Again, not the best painting but I have a soft spot for 1st Edition Oriental Adventures.

Obviously, what we have here is a female sohei, a fighter-cleric hybrid, about to get blindsided by a kappa, possibly of the vampiric kind.

For some reason she’s not wearing a bikini. 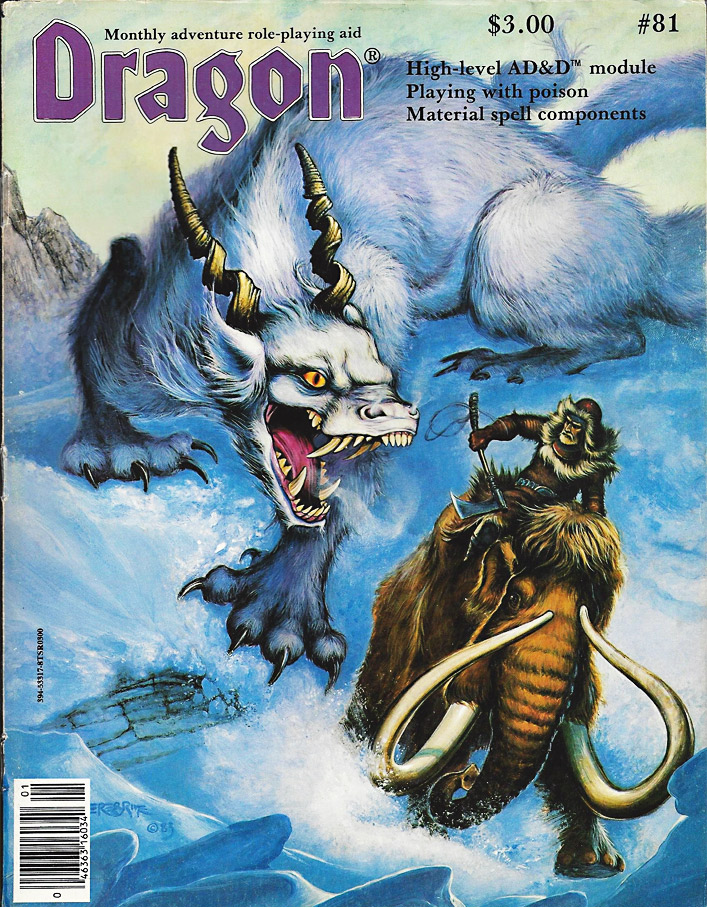 I have no idea what this creature is. Maybe a foo lion or a Chinese guardian lion?

The tamed and trained baby woolly mammoth is definitely a nice touch. The whole motif reminds me a little of the Lone Wolf book, The Caverns Of Kalte. 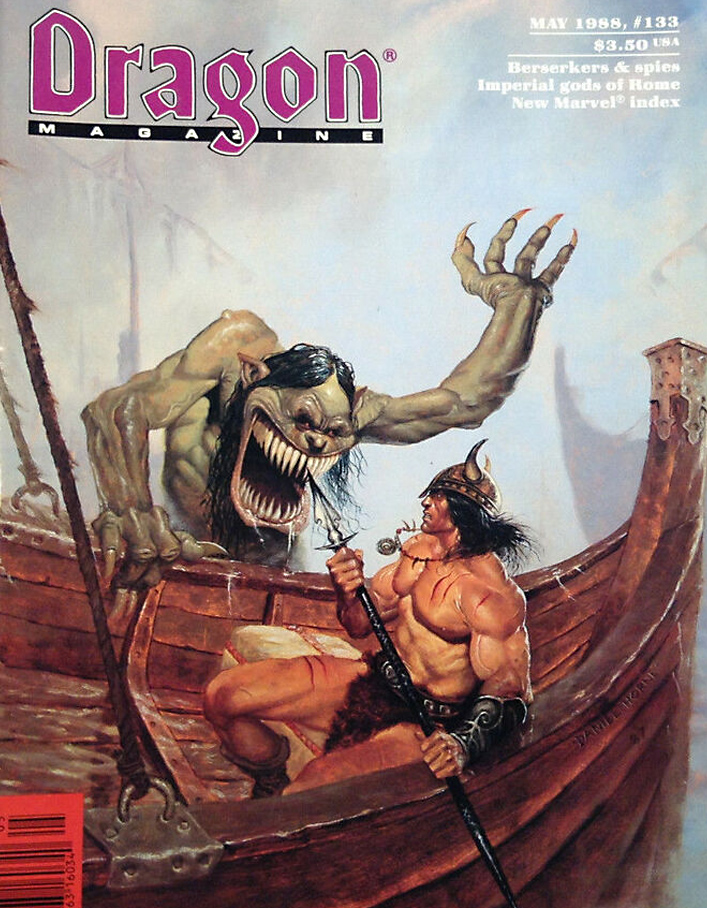 A sudden confrontation between a hot-tempered barbarian and a marauding sea troll is the subject of yet another great cover by Daniel Horne.

The sea troll — aka marine troll, aka scrag — first appeared in module S4, The Lost Caverns of Tsojcanth, alongside new monsters like the umber hulk, the piercer and the water weird.

The Lost Caverns of Tsojcanth happens to be the first D&D game I ever played. 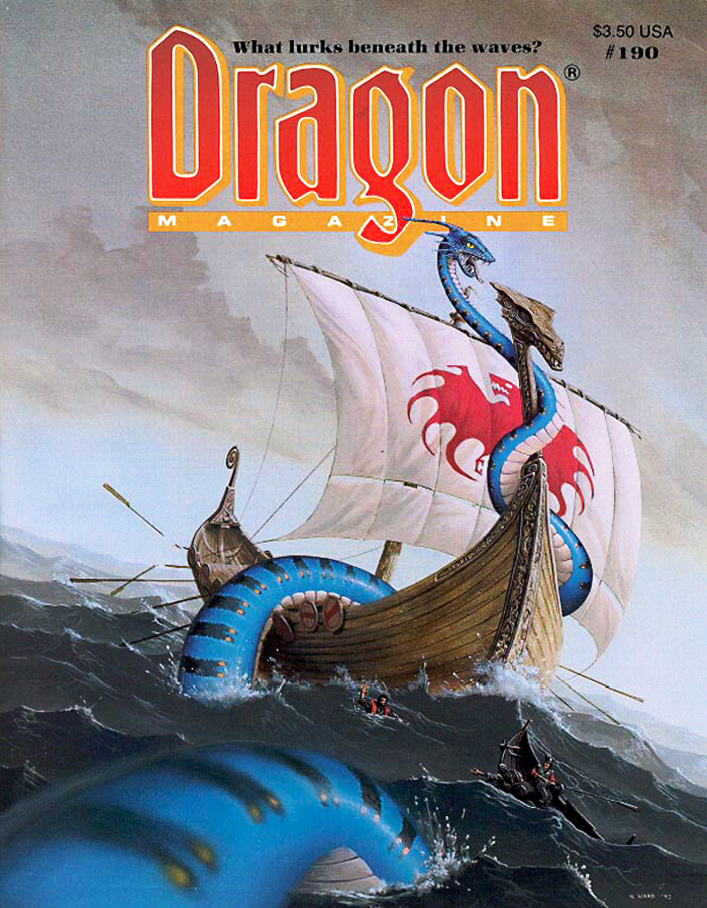 This is just an amazing painting of a dramatic sea serpent attack on a Viking longboat. I’d love to own this painting.

The style reminds me a lot of the Basic D&D rules covers, which had some of the best art in the entire brand.

I’m currently adapting some of the sea-based X modules into a 5th Edition campaign, so this one is also a little personal.

Now my day is complete. If you have different Dragon covers with weird monsters on them in your top ten let me know below.

And of course, If you’ve got any other ideas for top ten Dragon covers (or anything else you’d like to see at Rolling Nostalgic) please let me know in the comments below or over on the Film Goblin Facebook page.