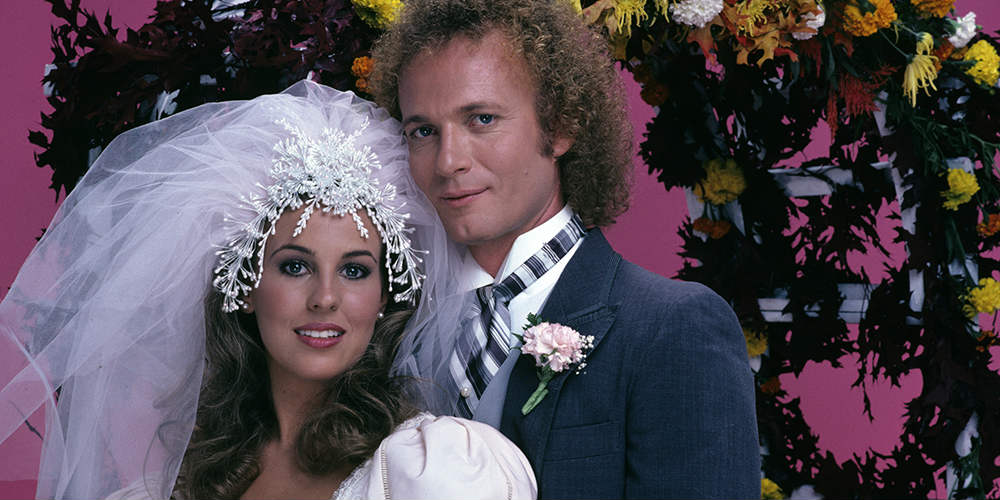 In the late 1977 the soap opera General Hospital was fighting for its survival. On the verge on cancellation they cast Genie Francis to play Laura, a teenage character, to bring life into the show and hopefully a newer, younger audience.

Francis’ Laura was a very popular addition to the cast but ratings didn’t move. Here’s a look at the ratings of the season before and after she joined the cast.

No change at all in viewership. So they had to try something else. But what? The showrunners decided to do a big story for Laura. A rape story.

They hired Anthony Geary to play, Luke Spencer, for a temporary stint at the end of which his character would be unceremoniously killed.

Late in 1978, a nurse named Barbra “Bobbie” Spencer has the hots for Scotty Baldwin, who was Laura’s husband. She convinces her brother Luke, a criminal, to come to town to break up Laura and Scott.  Luke gets a job at a disco that is a money laundering front for a crime boss (played by George “Punky Brewster’s Dad” Gaynes). Laura works there as well. Soon after, Luke tells Bobbie he won’t help in her scheme to break up Laura’s marriage because he has fallen in love with her.

During this time the ratings begin to rise, bringing it up to number 2 in daytime programming.

The Rape and Aftermath

Like Laura, Luke appealed to a younger demographic that liked their storyline together.  The writers wrote a controversial rape storyline between Luke and Laura, which would end with Luke dying in Laura’s arms, after which she would reunite with Scotty. Luke would be ordered by Frank Smith to assassinate Mitch Williams, a Senate candidate, on election night, in what would likely end in Luke’s death and was given a month’s advance notice before hit job. Laura show up and Luke tells her to leave so he doesn’t give into his lust for her. She refuses. Luke decides he has to hold Laura in his arms before he dies and the rape occurs.

To prepare for the story, Geary and Francis both met with a social worker before taping the rape scenes. Originally intended to be a brutal attack, it was changed in order for the encounter to come off as more of a seduction.

The ratings continue to get better and better and the decision is made that Luke isn’t going to die at all. Letters pour in from fans saying they want Luke and Laura to be together and have a bigger part in the show.

Initially, Laura admits to being raped, but does not name her attacker. She throws Luke’s keys away on the night of the election to prevent him from being killed. Frank, furious that Luke failed to kill Williams demands that Luke marry his daughter Jennifer.

Slowly, they replace the rape elements of the storyline with more of a forced seduction that she was actually game for that she just confused for rape. To see some of that pivot take place the scene between Laura and Scotty in the below clip is a good example.

Not long after this takes place, Luke and Laura run away together after stealing Frank’s black book, which is coded. They hope to find a way to break the code so Frank will go to prison. They are pursued by Frank’s hitmen during this time. They eventually decode the book and Frank goes to jail.

As the show moves to more of an action/adventure based soap than a traditional one during this time the ratings go through the roof, putting it into the number 1 slot.

The next big story-line for Luke and Laura was “The Ice Princess”. Continuing this directional change, the show moves further into the realm of action/adventure becoming a serialized, daily James Bond movie on a shoestring budget.

The Ice Princess was a large, uncut diamond that was sought after by a family of Bond-like villains, the Cassadines. They wanted the diamond so they could use it in a super-weapon that would allow them to control the weather and put the world into the next Ice Age if their demands were not met.

Luke and Laura teamed up with an Australian spy, named Robert Scorpio (Tristan Rogers), who worked for a spy organization called the WSB (World Service Branch) to stop them. The story-line culminated on the secret island lair of Mikkos Cassadine, the mastermind of the plot. The Cassadines turned the ice ray on Port Charles (the city in which Luke and Laura lived) to show the world their power and to enact their ransom scheme.

Luke, Laura and Scorpio defeated the Cassadines, with Luke killing Mikkos and turning off the weather machine.

The ratings for this period are even better than before, blowing expectations away.

Academy Award winning actress Elizabeth Taylor was a big fan of General hospital and an even bigger fan of Luke and Laura (It is rumored that she would stop working on set for an hour to watch this show). She called the producers of the show around this time and said if they would have Luke and Laura get married, she would be a guest star for the week of the wedding.

They planned to have the pair get married in about a year, but decided to move up the ceremony in order to nab a guest stint by Liz. She played the wife of Stavros Cassadine, Helena, who wanted revenge on Luke, Laura and Scorpio for killing her husband and thwarting his plans.

The wedding was on November 16, 1981 and had an estimated 30 million viewers, the largest ever for a soap opera episode.

The ratings for this year were just as almost as good as the previous, but the wedding episode and the Ice Princess storyline would never be surpassed.