Steven Spielberg and Michael Crichton were working on a project that would become the TV show E.R. when Crichton told Spielberg about his new dinosaur novel. Spielberg was hooked, and Universal bought the rights to make a Jurassic Park movie in 1990, months before the novel was even published. 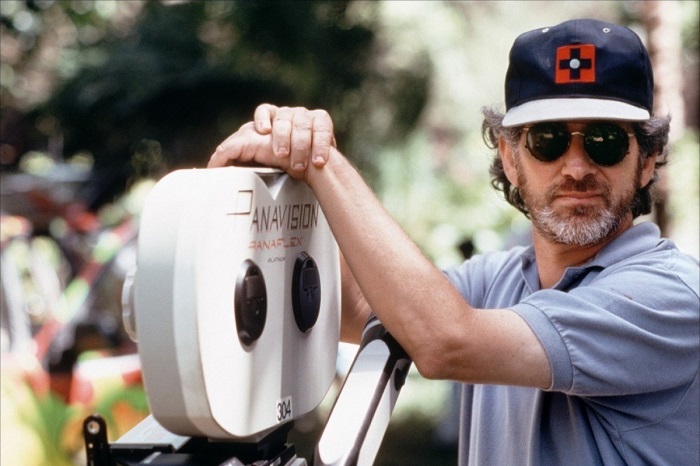 He even began storyboarding scenes from the book, although there was no screenplay written yet.

Though excited about Jurassic Park, Spielberg wanted to direct Schindler’s List. But MCA/Universal President Sid Scheinberg would only greenlight Spielberg’s Holocaust movie if the director agreed to make the dinosaur film first.

Both films were released in 1993. Jurassic Park in June, and Schindler’s List at the end of the year. 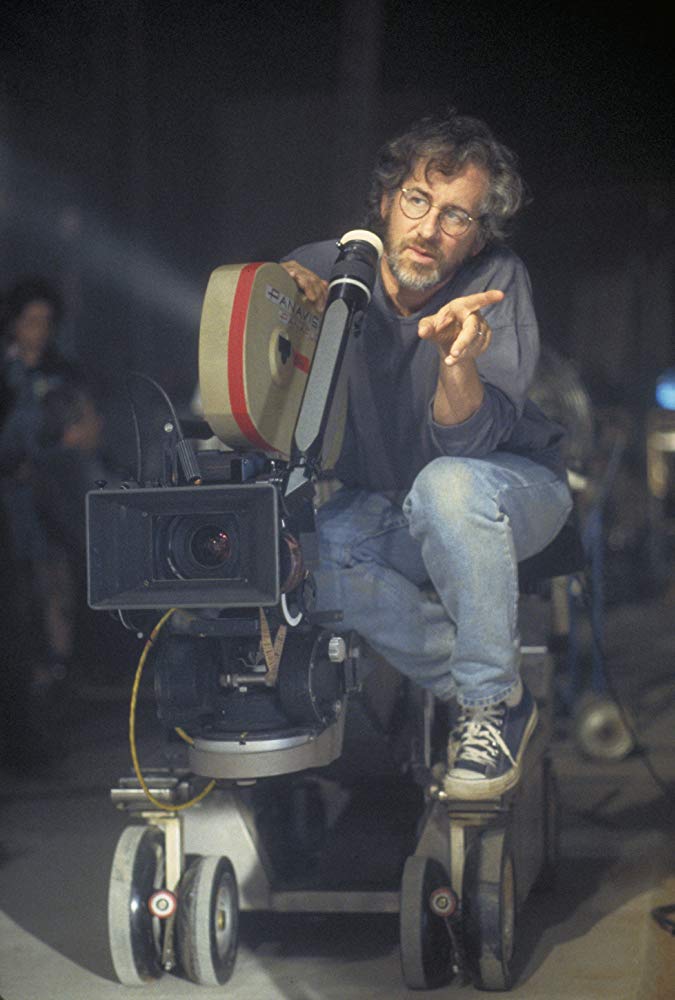 In a 1993 interview he described the challenges of working simultaneously on both these very different films:

“I’m sitting here working in a black-and-white medium on a Holocaust story about an unpraised hero, over my head in that kind of sorrow every day. Then I have to kind of shift gears and get on the action-adventure story fast track. That’s been hard on all of us – the same editors have cut both movies along with me – so together we’ve gone through a kind of cinematic and cultural whiplash.”

Spielberg and crew completed filming on Jurassic Park on November 30, 1992, 12 days ahead of schedule, but he had to quickly shift focus and concentrate on shooting and completing Schindler’s List.

George Lucas stepped in to oversee the last weeks of post-production and has a credit at the end of the film. Sir Richard Attenborough came out of a 14-year hiatus from acting to star as Jurassic Park creator, John Hammond. Spielberg had already asked him to star in two previous films, but Attenborough declined. The request is pretty incredible, considering that Attenborough was the director of Gandhi, which beat Speilberg’s E.T. for both Best Picture and Best Director at the Academy Awards in 1983. 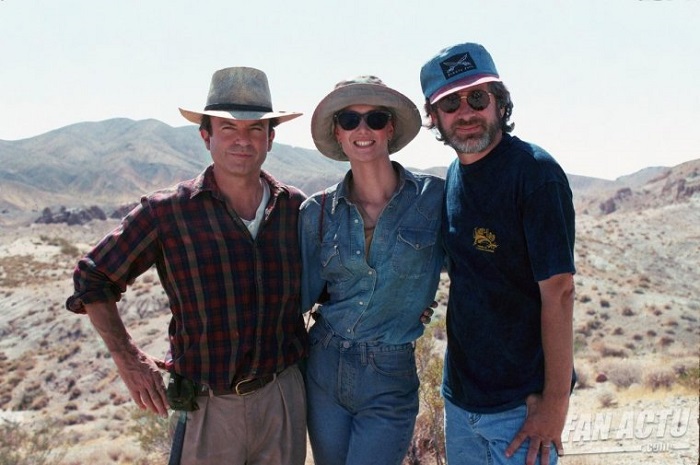 Other possible candidates for the lead roles in the film included William Hurt and Harrison Ford as Alan Grant, Sean Connery as Hammond, and Robin Wright or Juliette Binoche as Ellie Sattler. 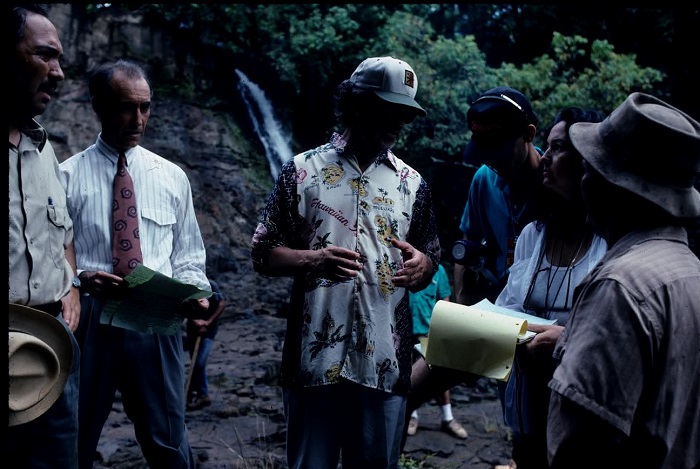 Many actresses auditioned for the part of Lex, including Christina Ricci. The role went to 12-year-old Ariana Richards, who later said it was her blood-curdling scream that got her the part. 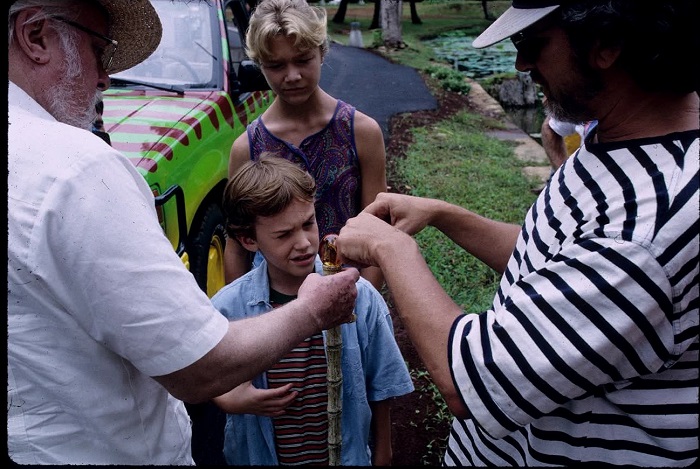 Joseph Mazzello had auditioned for Spielberg’s Hook but was turned away for being too young. Spielberg didn’t forget him, and Mazzello was cast as Tim, Lex’s younger brother. Tim was originally written as the older sibling, but Spielberg didn’t want to cast an actor any younger than Mazzello already was, so the ages of the characters were switched.

Stan Winston’s team, which created the exoskeleton from The Terminator, would build and operate the live-action dinosaur robots. Some creations, including the T-Rex, were full dinosaurs, but most were just the upper half—including the head and torso of certain dinosaurs—while others were the just bottom half, including the legs and claws.

The two models of the T-Rex each weighed 9 tons. Due to their weight, the crew constructed sets around them, rather than moving them onto sets.

The first dinosaur scene depicts a sick Triceratops. According to Duncan Shay’s book about the making of the film, Winston and his team had to rush to complete the Triceratops puppet after Spielberg put it at the top of the production schedule.

The Triceratops puppet took eight people to operate. One person operated the eyes by remote control while the others sat in a pit underneath the dinosaur. Each of the limbs were operated by a different puppeteer, with others operating the mouth, tongue and breathing mechanism.

Michael Lantieri, special effects supervisor on Indiana Jones And The Last Crusade and the two Back To The Future sequels, would supervise the interactive elements on-set. For instance, in the final scene when the CGI T-Rex throws a CGI raptor into a practical T-Rex skeleton, Lantieri was responsible for making sure the skeleton reacted, in a realistic manner, to the yet-to-be-included CGI elements.

The CGI Brachiosaurus dinosaurs in the film, the ones that jump on their hind legs to reach leaves on the top of a tree. Spielberg revealed in DVD commentary that the move was anatomically impossible for the real dinosaur to do, based on its bone structure found by real-life paleontologists. The CGI team shrank the digital creature’s hind legs to allow him to perform the bit of movie magic.

Phil Tippett, who received an Oscar for his special effects work on Return Of The Jedi, would use his “Go-Motion” technique for dinosaurs in wide shots, to add motion blur to each frame for smoother and more lifelike movement. Dennis Muren, who had previously supervised special effects on the Star Wars films and Spielberg classics like E.T. and Indiana Jones And The Temple of Doom, would lead the effects team at ILM in seamlessly combining all of the effects elements in post-production. 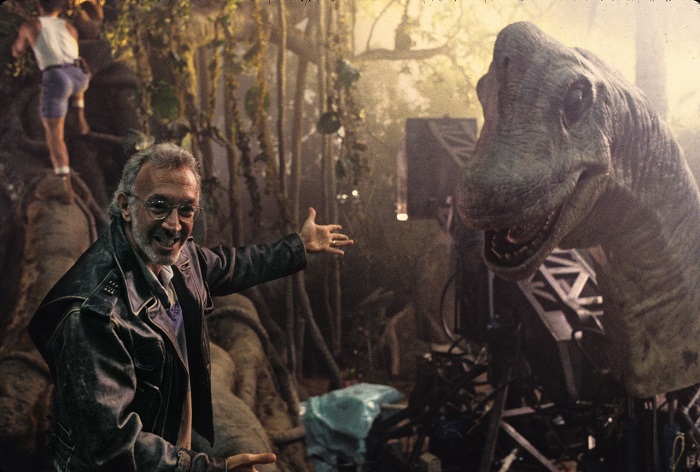 While viewing Muren’s complete CGI test with Spielberg and the other members of the effects team, Tippett said, “I think I’m extinct.” Spielberg incorporated Tippet’s comment into the film in an exchange between Alan Grant and Ian Malcolm:

Combined, all of Jurassic Park’s CG dinos have just 6 minutes of screen time, while total dinosaur effects shots make up only 14 minutes of the 127-minute film.

“Remind Me To Thank John For A Lovely Weekend”

The movie was shot on location in 1992 on Hawaii’s Kauai Island. The most powerful hurricane to hit Hawaii in recorded history hit at the same time they were filming, leaving them stranded in a motel for a few days without food or water. Attenborough apparently slept through the worst of it. The cast members asked him how he did it and he said that it was nothing by explaining he had survived the London Blitz during World War II. Allegedly, the rippling water scene was inspired by a mirror shaking in Spielberg’s car while he was listening to Earth, Wind, and Fire. Then the effect was created by placing the glass of water on a vibrating guitar. Goldblum also says he came up with the idea for Malcolm to save the kids by distracting the T-Rex with a flare and letting it chase him. The script originally had Malcolm running away scared, but Goldblum convinced Spielberg that the flare would be more heroic and exciting to watch. Scriptwriter David Koepp toiled trying to figure a way of explaining the science in the film in a way that made sense. He said:

“I remember Steven and I were wrestling with that very issue, about the DNA, and one of us said, ‘What are we supposed to do? Have a little animated character called Mr. DNA?’ And the other one said, ‘Yes. That’s exactly what we’re going to do.’”

The hokey Mr. DNA was animated into a short film shown to the Park’s visitors upon their arrival. After the film came out, Tippett’s work also made him infamous, thanks to the role he was given in the credits: “Dinosaur Supervisor.” When Jurassic Park aired on NBC on television for the first time in 1995, it had over 65 million viewers. This made it the most-seen-movie on television taking the top spot over 1987’s Trading Places. While Jurassic Park mania swept the world, critics Gene Siskel and Roger Ebert weren’t on board. They gave the film two tentative thumbs up, but also called it a “missed opportunity,” saying it didn’t hold up to Spielberg’s past films, including Jaws and Close Encounters Of The Third Kind. Jurassic Park cost $64 million to make, and another $65 million was spent advertising the film. It paid off for Universal Studios as the film brought in $357 million in North America and a total of $914 million worldwide in its original theatrical run. It was the highest-grossing film ever until its record was broken by Titanic in 1997. In 2018, the film was selected for preservation in the United States National Film Registry by the Library of Congress as being “culturally, historically, or aesthetically significant”.

We’ll leave you with this pretty cool BTS video of Jurassic Park: