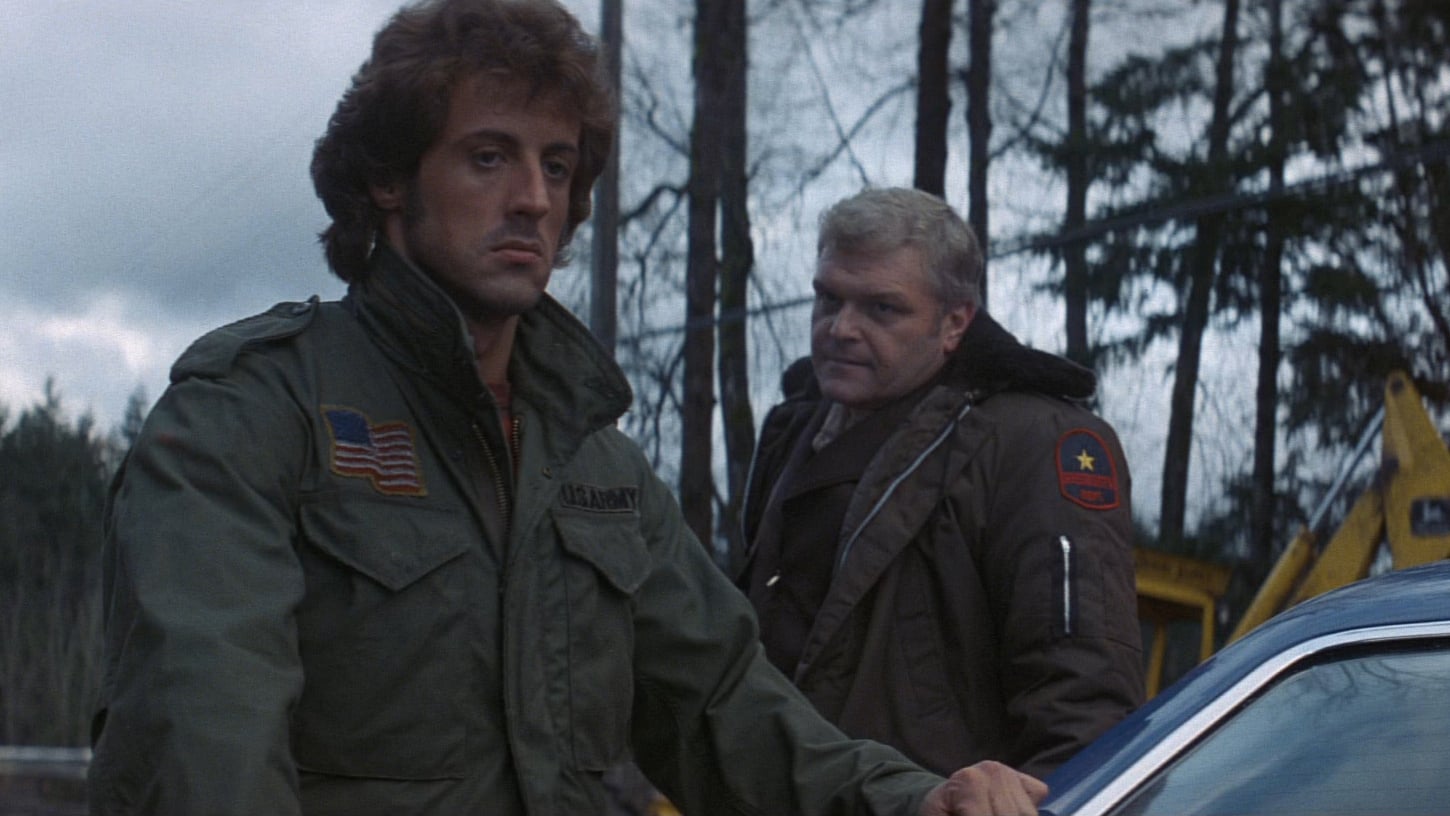 “Can You Tell Me If Delmar Berry Lives Here?”

First Blood, was written by David Morrell in 1972 and was very well received, the film rights went on to sell later that same year. It would then take a further 10 years for the project to move from page to screen due to rewrites, resales, and the rights to the movie being passed from pillar to post.

In 1982, the film adaptation ended up being very different from the novel. As well as changing several characters and minor points, the entire focus of the novel shifted by the time production started. In the book, basically, everybody dies.

Morell cites many influences for his novel, but a major inspiration for the character of John Rambo himself was War hero and actor Audie Murphy.

The original budget was $11 million, however, the film ended up costing closer to $17 million as production ran months late, which in turn, stalled the pre-production for Rocky III. Sylvester Stallone asked for $3.5 million for his part.

Producers Mario Kassar and Andrew Vajna agreed and told him he could have $2 million from initial profits and a further $1.5 million from future television sales.

Stallone hated the first 4+ hour cut of the film so much, it made him physically sick after he first watched it. Fearing it would destroy his career, he tried to buy the film back and destroy it. He suggested the producers cut most of his part out and let the rest of the characters tell the story. They cut the movie time in half and setting the standard for future action movies.

“All I Wanted Was Something To Eat”

That piece of rotten canvas that Rambo finds in the woods, was a real and found by the film crew during the movie’s production.

Sly joked about how the canvas became a treasured prop on the set because it was the only type of jacket he was allowed to wear during a bitterly cold British Columbia shoot.

Stallone kept the rotten canvas after filming had finished.

In spite of the fact that temperatures during filming were extremely cold, and he wore only a tank top during most of the movie, Stallone never got sick, well not until someone offered him a shot of brandy. He said the fluid in his eyes begun to freeze over during the motorcycle chase scene. 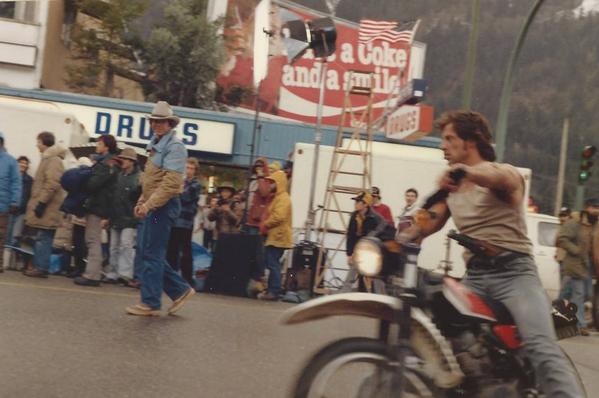 The names of the people on Rambo’s team in Vietnam (as read by Col. Trautman) are actually names of people from the film’s crew, including make-up artist Michael Westmore and costume designer Tom Bronson. 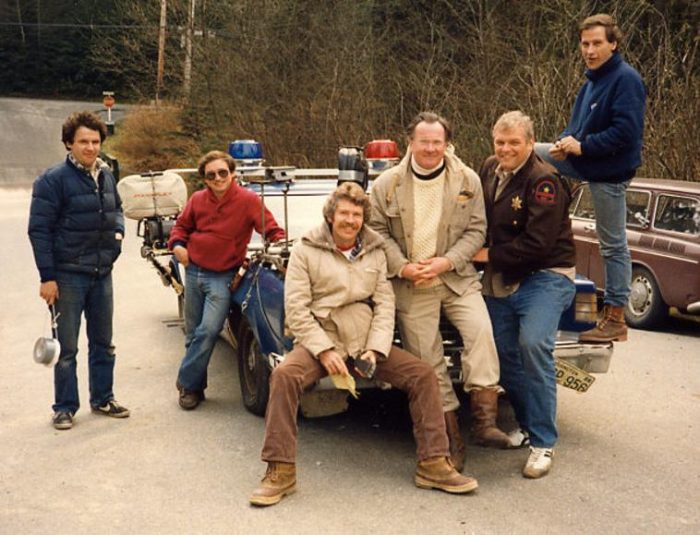 Stallone suffered various injuries during the filming of this movie.

During the scene where Rambo throws himself from the cliff and injures himself when landing on the tree branches on the way down, Sly performs the stunt himself during the bottom third of the fall, and in the process, cracked a rib when he landed on the tree branch.

Stallone said that it wasn’t hard to do when Rambo screams in pain since he wasn’t acting and he really was in pain.

The scene where he stitches up his arm was filmed using makeup and prosthetics.

“They Drew First Blood, Not Me”

One plot that was present in the novel but wholly absent from the film was the reason behind Teasle’s underlying resentment and dislike towards Rambo, which was that Rambo was a decorated Vietnam War vet, which gained a lot of attention, whereas Teasle was an equally decorated Korean War vet, a war which most people had forgotten about. 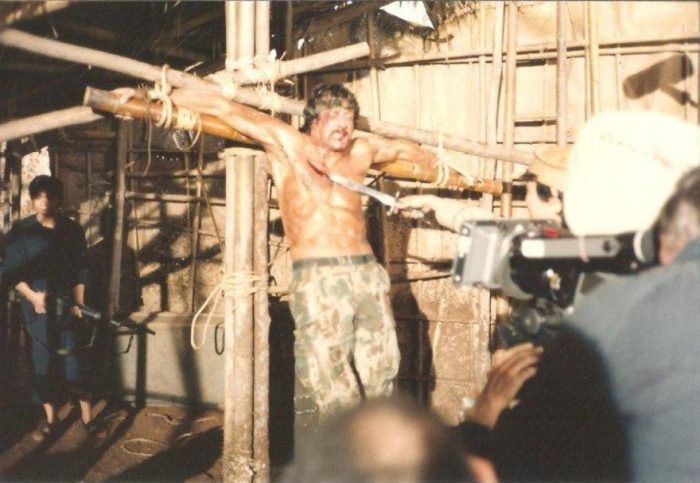 This film and the franchise as a whole has a reputation for being overly violent.

However, the total body count of the movie is only one person, that being Gault falling from the helicopter.

The novel ends with Rambo being killed by Colonel Trautman, who was brought in to kill him because he had trained him, and the only one who could stop him as Rambo had to be put down. However, in the films, he is an important ally who always defends Rambo.

An alternate ending, where Rambo dies in a mercy killing (as in the novel) was filmed, but test audiences found that conclusion to be too depressing, so the script called for Rambo to live, hence the sequels.