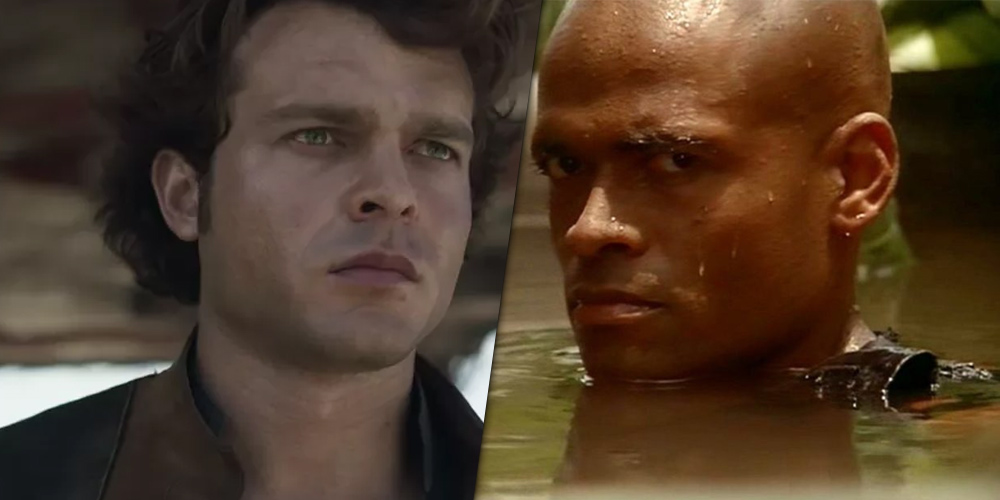 The Wife Is Gone!

At last, I watched Solo: A Star Wars Story. No watching with the wife this time. Her reaction to being made to sit through Rogue One and The Last Jedi was to print out divorce papers and remind me that my greatest contribution to the marriage was reaching things off high shelves.

In my previous Star Wars-themed installments, I pitted the new movies against some unrelated but thematically similar classics: Rogue One vs. Where Eagles Dare and The Last Jedi vs. The Last Starfighter.

This time I stacked the deck in Star Wars’ favor…

In one corner, we have a Star Wars movie that fired its original directors and reshot with Ron Howard. Some might call this dysfunctional. Disney calls it business as usual.

It features a Young Indiana Jones Chronicles take on Han Solo, played by Alden Ehrenreich, who won an Oscar for Most German Sounding Surname in 2018.

In the other corner, we have a Mario Van Peebles vanity project from 1996. I’m pretty sure it was a vanity project because Mario displays his gainz, and the story is bogged down by just enough meaning to make me believe the creators wanted to make the world a better place through B-movie preaching. 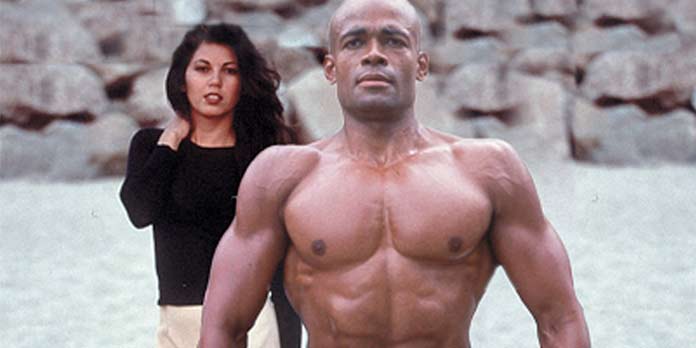 Which was the better film?

I wish my wife was here to answer that question.

Solo: Is This a Star War?

As I sat through the first third of Solo: A Star Wars Story, I thought to myself, maybe this can work. Sure, how Alden Solo got his name was an eye-roller — the lowest of low-hanging fruit, the kind of thing that only an audience member with an IQ lower than said low-hanging fruit would find clever. I imagine the chained-to-a-desk staff writer tasked with crafting this scene refusing… until Mickey Mouse started putting cigarettes out in the back of his neck.

I wasn’t a fan of how Alden Solo met Chewbacca. That scenario was so stock that even Red Letter Media predicted it would happen ahead of time.

I wasn’t a fan of Alden Solo’s motivation in the movie being to get with a woman. In this case said woman is the actress who played NuSarah Connor in Terminator: Genie’s Sis. I think she was in something else, too, but I believe the memory of whatever that was has been repressed by everyone due to its less than a satisfying final season.

NuSarah Connor is a perfectly serviceable story device, but I prefer Leia being Han’s only lady. Once again, these new Star Wars films weaken or destroy something from the Original Trilogy. Loner Han and Icy Leia expressing love in The Empire Strikes Back was a great scene.

Han saying, “I know” to Leia’s “I love you” was so perfect that you forever leave that dynamic alone. No other romances should come into other films for either of them. 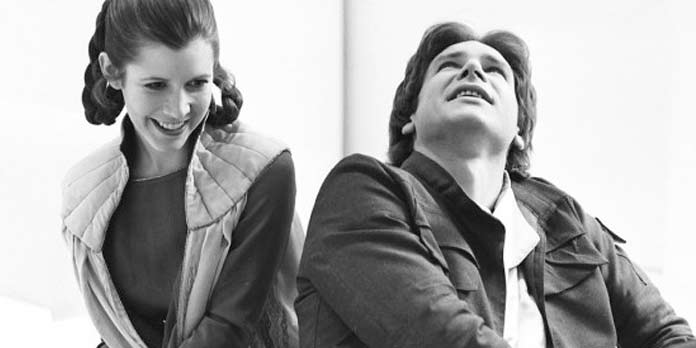 Despite these weak points, Solo: A Star Wars Story limped along okay. It didn’t rehash the plots of the first three films. It didn’t have a Death Star in it. No one was using the Force and trying to make the Force sound like it has any depth whatsoever remaining at this point.

The movie even hit a genuine stride during the train robbery. That particular sequence had a degree of excitement and weight. Characters died. A secondary villain, Empty Nest, nicely complicated matters. The robbery failed. Alden Solo and Company were then in trouble with the crime lord whose booty they failed to capture.

Disney had something cooking at that point.

Then they dropped the ball…

Meanwhile, Solo: A Mario Van Peebles Movie was handicapped from the beginning.

You remember when department stores used to have child portrait days? That is kind of how Solo: A Mario Van Peebles Movie looked — filmed by JC Penny.

Maybe the most interesting image was Adrian Brody rocking his 1990s wardrobe. I could practically smell the teen spirit emanating from the screen. 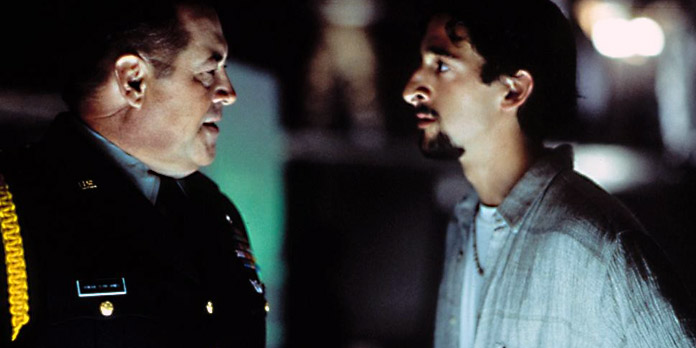 Yet, a sincerity existed to Solo: A Mario Van Peebles Movie. They tried their little hearts out, and the story did have a functional structure:

Android soldier developed a conscience, so he must be scrapped. Who cares that he cost $2 billion? For that amount of money, they could have at least made him a butler, but William Sandler and Barry Corbin decreed his demise.

Solo hung out with some jungle peasants who taught him how to laugh. Bad guys showed up. Solo lost his Adrian Brody mentor, got his diodes in a huff and defeated the final boss — an android William Sandler, which looked like an eighty-five-year-old man’s head stuck on top of one of the black-armored hockey players from Strange Brew.

It also had a gun-arm. 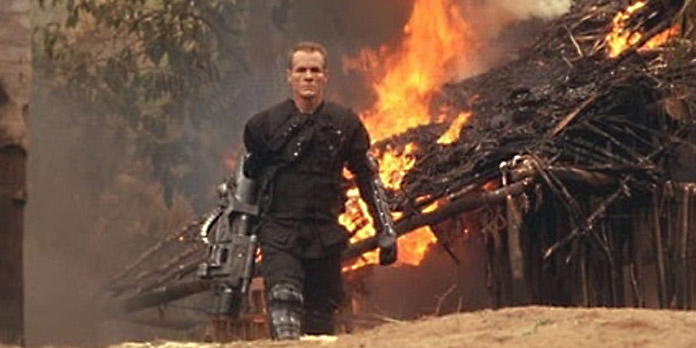 All of that is somewhat acceptable. Solo: A Mario Van Peebles Movie was a straight-to-video film that somehow got lost and ended up in theaters where it simply didn’t have the production values to compete against the big boys. Then again, if you look at the films released at that time, the playing field was a lot more level than one might think.

Solo: A Mario Van Peebles Movie came out in August 1996. Its main August competition was Bordello of Blood, Tin Cup, The Island of Dr. Moreau, A Very Brady Sequel and The Crow: City of Angels.

On the other hand, Solo: A Star Wars Story had pedigree, a budget and baked-in expectations. All hope of meeting those expectations flew out the window after the train-robbery sequence. From that point on, things became clunky.

Let Me Count The Ways…

Paul Bettany could have been a solid primary villain, but he didn’t get to do much.

Plus, it was a stretch to believe that of all of the crime lords in the galaxy, NuSarah Connor just happened to work for the one that Alden Solo had to visit.

Empty Nest turned out to be a good rebel pirate disguised as Maya Rudolph. 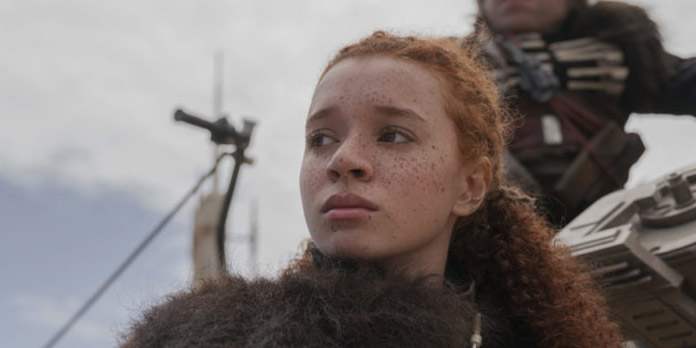 She then trashed Han’s arc in the Original Trilogy. She got Han to donate all of the fuel he stole to the rebel fleet. This showed Han was never a scoundrel.

He always had a heart of gold.

His returning to help Luke in Star Wars was the standard operating procedure, not a great character turn.

Alden Solo pulling a Han-Shot-First-Move on Woody Harrelson was a decent character moment. Yet, they screwed that up in the end, as well, which may be a reshoot issue.

At the end of the film, Alden Solo mentions how Woody told him about a gangster who was hiring smugglers: “Jabba!” the same person who was impressed by how Solo got his last name cries from the back of the theater with pride in his ability to recognize obvious references.

Note the way Alden Solo delivers that line. It is a good-natured delivery. Why is he so good-natured about it? He just shot the guy and felt bad about it earlier. The delivery felt jarring to me, like maybe Woody lived before reshoots, and this delivery was attached to that version of the film. Or maybe I’m a nitpicking dork.

NuSarah Connor flew away at the end with no resolution. She also works for Darth Maul, apparently. Darth Maul had to be a reshoot insert. It exists for no other reason than to make Darth Maul fanboys happy. I liked Darth Maul, but his appearance didn’t make me happy. The scene was obvious, pointless fan service.

As was Warwick Davis standing around.

SJW-Bot was terrible. How distraught Lando got when SJW-Bot died was even more terrible. I half expected him to fall to his knees and wail, “NOOOOOOOOO!”

Maybe he did, and I blocked it from my memory. By that point, I was checking out.

I did not like the inclusion of the Kessel Run. Like Spielberg said about showing the inside of the mothership in Close Encounters of the Third Kind, Special Edition:

“That should belong exclusively to the imagination of the viewer.”

Are we happier now that we know the Kessel Run killed one of H.P. Lovecraft’s Old Ones?

Plus, the rule of Lovecraft remains intact — the idea of Lovecraft is often better than the reality of Lovecraft. If I heard someone say, “what if Han Solo encountered a giant, tentacled monster in space”, I’d think, “that sounds pretty cool!”

Yet, how it played out onscreen was a bit wonky. 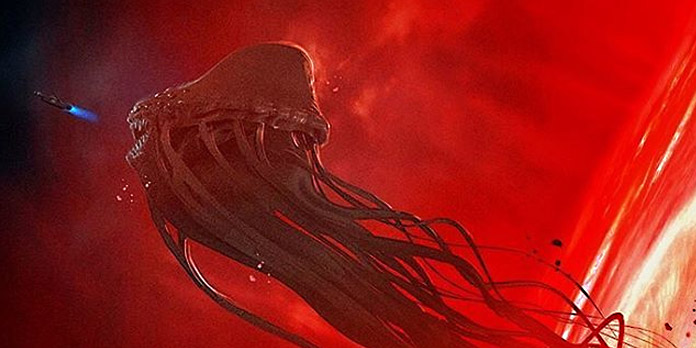 There you go — same basic parts, but I could have lived with this story a bit more. Han is less bumbling and more cunning.

He gets betrayed by people to make him more cynical. Yet, the Woody mentor figure gives him an object lesson in not being totally selfish.

No future character arc is ruined. We get to see some fun reversals and capers. The story flows better without shoehorning Chewbacca, Lando, the Millenium Falcon and the Kessel Run into it.

Meanwhile, when I think about what I would do to make Solo: A Mario Van Peebles Movie more satisfying, I shrug and think, it is what it is.

Solo: A Mario Van Peebles Movie wasn’t part of a well-loved franchise. They did what they could with what they had.

Solo: A Star Wars Story and Solo: A Mario Van Peebles Movie, which is better?

They both could have been better…