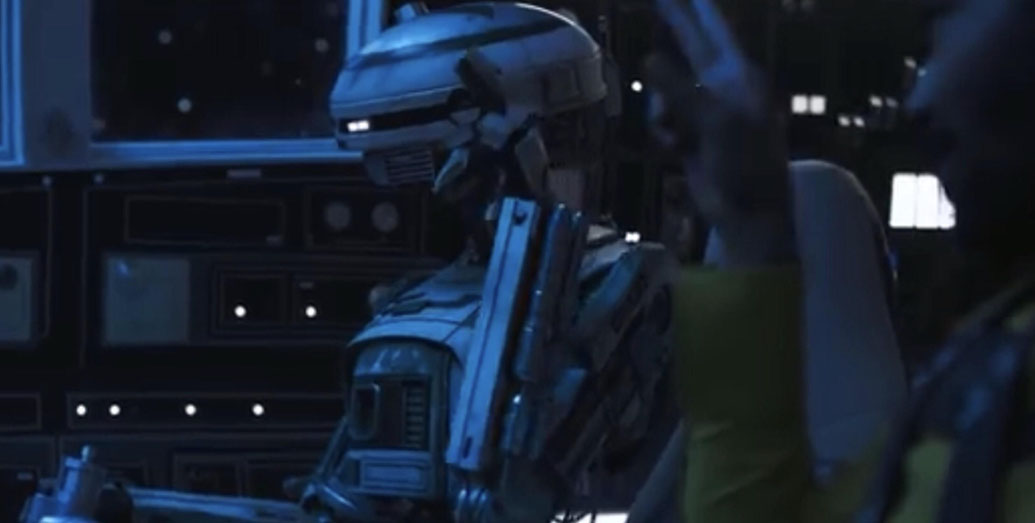 The Motherboard is Female

“The Force is Female”, declares the woman busily screwing up the Star Wars franchise, and the domineering women (and emasculated, fuckup men) we’ve been seeing on-screen lately in these increasingly-awful movies reflect that feminist vision.

But if Mary-Sue Force-users, purple-haired admirals who don’t need to explain anything to their top commanders, and Resistance bridge crews made up almost entirely of women weren’t enough to drive the point home, now Kathleen Kennedy is going to work on the droids.

Solo: A Star Wars Story, it has recently been revealed, will feature the first female droid in the history of the franchise: L3-37, voiced by Phoebe Waller-Bridge. (Please, don’t bother pointing out to me that there was a female droid in panel 3 of page 7 of one of the Dark Horse comic books in 1994; I don’t want to hear about it.)

I’m not really sure what the in-universe point of building explicitly “female” droids would be, nor am I sure what kind of quota system the Rebellion has in place for ensuring gender parity in droid construction.

Hahaha, oh wait, that’s right, NO ONE built her!  The strong, sassy, “subservient to no one” L3-37 (I always thought the entire point of droids was that they were subservient; this would be like your laptop or phone refusing to do anything you told them) built herself. In Kathleen Kennedy’s #StarWoke, the women are so God-damned strong and independent they’re not born, they’re not created, they just are.

The debate over how much sense it makes to assign gender to robots (R2-D2 is a rolling trash can, for crying out loud), how one would go about it, what kind of market forces would drive it, etc., is beside the point. The point is that L3-37, who as a female droid is apparently going to be the strongest, most independent anti-droid ever, is perhaps the most blatant illustration of the social-engineering agenda that’s been pushed on Star Wars during the Kathleen Kennedy era, and that is one component of the franchise’s spiral into diminishing returns.

You know, I started out to write a simple clickbait news story (and it worked, you’re here), and look how much I’ve rambled. We’re going to have to create a “Politics” section for filing Star Wars news, at the rate Kathleen’s going. Female droids, Jesus Christ. (Solo screenwriter Jon Kasdan says that it was “more than time” for a female droid, which is kind of like saying it’s more than time for Black & Decker to manufacture a female toaster.)

But anyway, they’re here, so get used to it boys. Solo, the movie nobody asked for, will be released May 25.