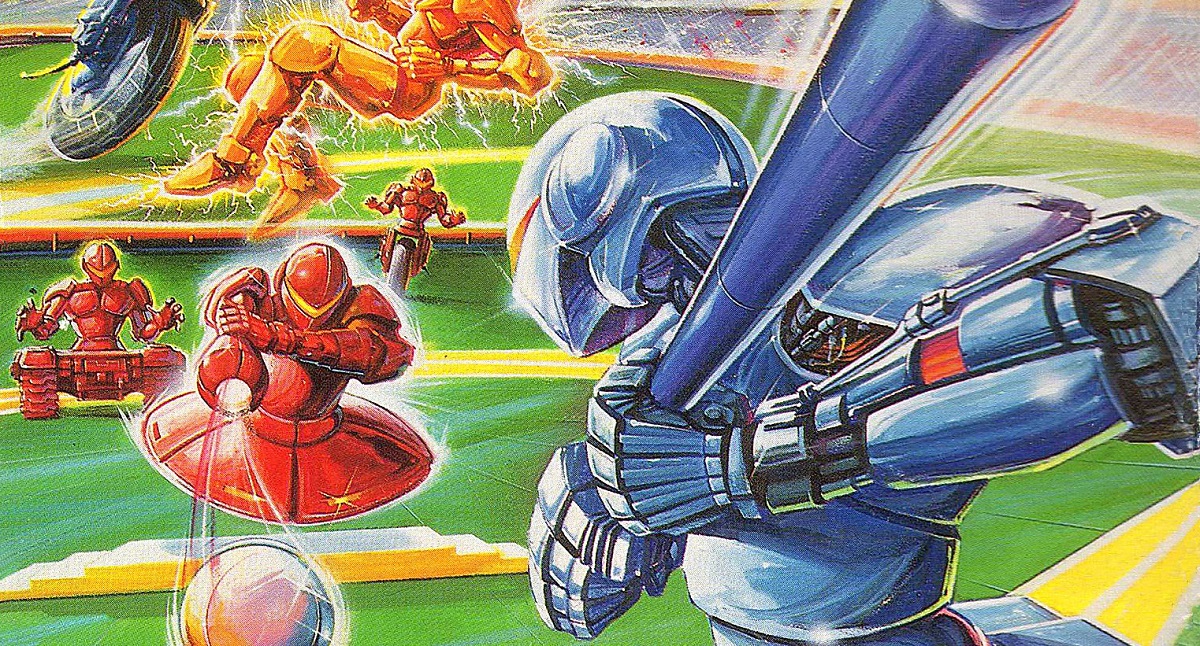 With the MLB All Star Game looming this week, it’s a good time to take a moment and appreciate America’s National Pastime. For nearly two centuries, baseball has remained virtually unchanged. Though the fairy tale of Abner Doubleday creating the game in Cooperstown, New York has been long since debunked, it feels right that our much beloved game would have such humble beginnings.

Little boys, now old men, have passed the game from father to son. Indeed, there may be nothing more likely to bring a tear to a grown man’s eye than Ray Kinsella asking his Ghost Dad if he wants to play catch at the end of Field Of Dreams.

It seems only fitting that the natural evolution of this game would one day include killer robots outfitted with cannon arms and other weapons.

BaseWars initially plays like any other baseball game on the system. Players can choose between twelve teams representing American cities or two customizable teams. I opted for the latter and proudly fielded a team I lovingly called Ass Butt.

Each team is still comprised of nine players in the traditional positions associated with baseball and gay sex: pitcher, catcher, etc. Unlike the game played by grossly overpaid athletes, though, there are different types of humanoid robot hybrids available to play as. These include robots with lower-halves resembling tanks, hovercrafts, and unicycles. There are traditional bi-pedal robots, but those are lame.

Separating The Bots from the Boys

Unlike most baseball games, what separates BaseWars is the fighting between the runner and fielder on close plays that would otherwise be solved today by five hours of umpires watching replay footage. If the robots involved in the play have been outfitted with weapons, they can utilize them for an advantage in the fisticuffs on the field. Guns are probably the most powerful and unfair weapons, but if a player has a sword, they can just lower it and charge at his opponent for an easy victory, as well.

Adding a strategic wrinkle to the fighting is each player’s health bar. Get your ass kicked too many times, and your robot will explode on the field. Something that hasn’t been seen in real baseball since Cecil Fielder inexplicably stole a base in 96.

For Love of the Game

For a game released in 1991, BaseWars definitely tries its best to take full advantage of the NES. The graphics look amazing during the batting and fighting segments, but they instantly turn to Atari 2600 levels once the ball is in play.

Hitting is more or less similar to most other baseball games on the system. Pitching, on the other hand, takes advantage of the idea of robots playing baseball and allows the pitcher to charge up his shot before firing a pitch. The ball can also be curved while in destination to the catcher, but this is standard for most games of the time.

Fielding is an issue as the ball will often land in an area the camera has not yet caught up to, making it entirely guess work if your fielder is in the correct spot. The sensitivity on the robots must also be set quite high as any simple press on the directional pad can make the fielders veer too far away from catching an otherwise easy pop fly.

Oh My God, I Was Wrong

Perhaps what is most interesting about the game is any time a homerun is hit. Apart from the voice sample that goes, “Yeah”, a scene will play of a spaceship flying out to mark the occasion. For the first time, we are able to see the stadium we are playing in, and it’s apparently floating in space.

Normally in a game about killer robots playing baseball, this would be accepted, but we have already seen that the standard teams are named after cities in America. You know… on Earth. This simple screen implies a Titan A.E. scenario where our planet was destroyed by aliens, and a space faring band of robots have tried to recreate our lifestyle through broadcasts they’ve picked up of old baseball games and action movies: everything that makes America great.

A loose copy of BaseWars should cost you less than ten bucks. If you like RBI Baseball on the NES and are looking for something a little different, I advise picking it up. Add a few bonus points if you have any nostalgia for this game. If you’re just looking for a baseball game, any baseball game on the system, copies of Bases Loaded are available at most retro stores for about a dollar.

As a single player experience, it’s OK, but its main replay value comes from playing against a friend. Not only does this allow for telling your opponent what a fat whore his mother is, doubly odd if playing your brother, but it lets you both wallow in the misery of the shitty control scheme, so it doesn’t feel as unfair as playing against the computer. Sensitive controls aside, it’s a fun game and worth picking up this week to fill in the couple of baseball-less days during the All Star Break.