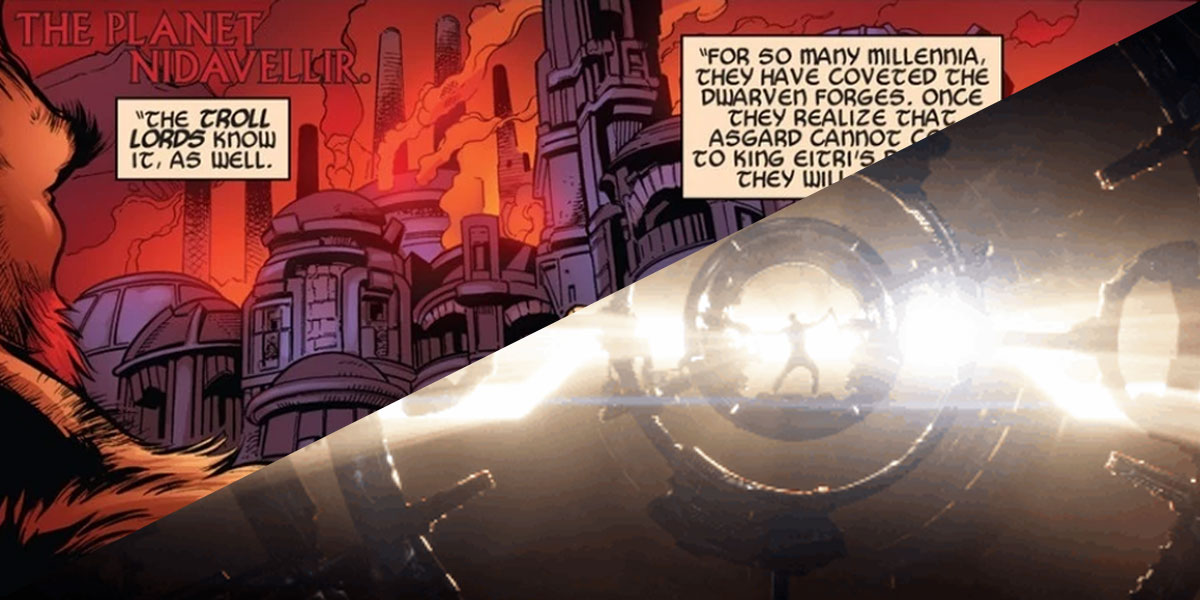 Bear with me here because, as you may know by now, I am largely clueless when it comes to comic books in general.

Exploring the origins of locations in the Marvel Cinematic Universe (MCU) was a great suggestion from a Goblin editor and  I honestly found it more interesting than I ever thought I would.

After all, I’ve avoided comic books all these years for a reason.

Spoilers for Avengers: Infinity War as well as other MCU movies follow so proceed at your own peril.

At face value it seems like the Marvel writers are obsessed with mansions. I knew the X-Men used the school mansion for a secret base, but I had no idea that the Avengers did the same. I find this simultaneously hilarious and heartwarming.

No, the team didn’t rent space from Charles Xavier. They apparently had their own place… in Manhattan.

Complete with a butler named Jarvis, who maintained the place and tended to the Avengers when they were present, the mansion was also equipped with a hangar for QuinJets.

The mansion formerly belonged to the Stark family and Tony Stark (Iron Man) repurposed it for superhero use.

Most interesting of all, at least to me, is that the above-ground floors of the mansion were apparently open to the public. Despite being surrounded by a large fence and various security measures designed to keep super-villains out. Open to wha — what’s that now?

Avengers HQ In The MCU

Contrast that with the Avengers’ Base as depicted in the MCU, wherein each blade of manicured grass is wired to trip an alarm should someone or something try sneaking around.

My preference is the MCU depiction, although I can see where the comic book origin is coming from and Stan Lee surely considered his young readers when creating it.

Wakanda From The Comics

First appearing in the mid-1960’s Marvel publications, the nation of Wakanda is pretty much the same thing you saw on screen in the MCU’s Black Panther.

A tribal nation hiding a fantastic secret, Wakanda is just as lively in comic panel form as it is on screen. In fact, probably more so:

As you can see, the Wakandan jungle hiding the technology isn’t jungle but more technology. Computer dynamo boulders! What wily Wakandans!

The MCU version was more simplistic and honestly a lot dumber without exposition.

Their city is hidden by a force field that renders it impenetrable (unless you’ve stolen a small craft and are using an older code) except to natural elements such as earth, air, and water. This is something I wondered about during the attack on Wakanda in Infinity War. The dome-shaped force field covered the whole city and touched down across a small stream of muddy water, which is what caught my eye during the CGI-horde overload.

In my research for this piece, I learned that Thanos was born on Titan, which is based on a real-life moon of the planet Saturn.

Thanos was born a mutant, and while I don’t know if that means he simply looked different from his family or if it means he had X-Men-like powers, I do know that he was different in more ways than one, his mind filled with visions of death and destruction.

In the MCU, Titan is not based on a moon of Saturn and was populated on its surface, as Thanos, with a wave of his arm, shows Dr. Strange a vision of how his home used to be.

Here’s a look at the current state of Titan as Iron Man, Spider-Man and Dr. Strange crash-land on its surface:

I’m generally not a fan of prequels but I have to say that I would be down to watch an MCU movie (one, not a trilogy) set on the planet Titan before its demise.

Home to a race of Dwarves, Nidavellir is also the birthplace of the mighty weapons Mjolnir and Stormbreaker.

Forged by the Dwarves for Odin, both weapons play a large role in the Marvel comics and in the MCU, though they serve different purposes in each.

Closely tied to Asgard in terms of protection and assistance, the planet of Nidavellir is key to the Marvel comics universe.

In the MCU, Nidavellir almost seems to be a legendary or mythological place, given Rocket Raccoon’s disbelief when Thor says that they must go there to forge a new weapon for the war against Thanos.

The re-firing of the Star Forge in Infinity War is one of my favorite scenes. Thor continues his journey of bravery and self-sacrifice in one of the more impressively staged set-pieces.

My research into Vormir turned up surprisingly little info on the location, which is a planet and home to a race of malevolent creatures called Vorms, which are giant red humanoid-dinosaur creatures.

Perhaps I again missed some exposition, either in the Guardians of the Galaxy movies or during Infinity War, but somehow Gamora knows the location of the Soul Stone on Vormir.

When she and Thanos arrive there and meet the Red Skull, I assumed it was an after-life/purgatory situation. This was due to me not remembering the end of Captain America: The First Avenger coupled with my lack of Marvel knowledge.

In any case, at least now I know a little more which will only enhance my viewing experience when I purchase these movies on home video.

In the Marvel comics universe, there exists a race of beings known as Celestials.

No one knows what the Celestials look like underneath their 2,000-foot-tall armor suits, only that they hold cosmic power of unknown limits.

Now, what or who in the hell would dare to try, or have the strength, to decapitate a Celestial?

No one knows, but here is the resulting floating severed head:

The massive wires and cables trailing from the neck-stump seem to me to point to the conclusion that perhaps the Celestials really aren’t 2,000 feet tall themselves and they only use their armor to appear intimidating. I digress.

As you can see from the panel, the floating head has become like a coral reef in space. Various forms of life, finding themselves at the edge of space-time, have clung to the structure and now call it home.

To me, this is fascinating stuff, and, like a prequel on Titan, I would really enjoy seeing an MCU movie about the events that led to a Celestial losing its head and the creation of Knowhere.

Here is the head as depicted in the MCU:

In the MCU movie Guardians of the Galaxy, during the scene in The Collector’s menagerie, the cosmonaut dog growling at Rocket is actually a telekinetic dog named Cosmo, and in the comic version, he runs the show on Knowhere.

Where do they come up with this stuff?! My heart leaps at just the thought of all the stuff contained in the Marvel comics and the MCU depictions and Easter eggs. In writing this, I feel like I’ve barely scratched the surface. I hope the Marvel Cinematic Universe continues for many years to come.

Thanks for taking the trip with me!